The Gardens of Remembrance at Battery Park in New York City was the first phase of Piet Oudolf's master plan for the park. That garden lines the Promenade along the curving waterfront at the southernmost tip of Manhattan. The second phase of Oudolf's master plan, the Battery Bosque, was completed in 2005. It is a much larger 4 acre area created with sustainable plantings in the interior of the park, amid a grove of 140 plane trees. (The Battery Conservancy has a really good web site with maps, plant lists, slide shows, and lots of other information about the new park and future developments.) 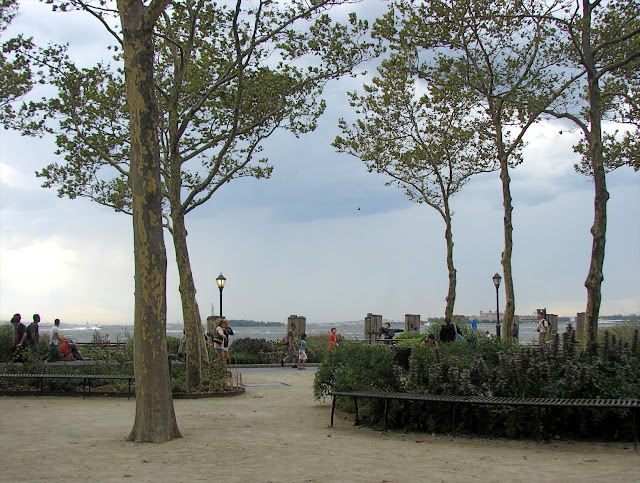 A thunderstorm rapidly approaching from the west, with high winds and a short, heavy rain, quickly darkened the sky in the photo above, taken on a visit last Friday afternoon. In the distance you can see the white caps kicked up by the wind and some park visitors clearly enjoying the drama of the approaching storm from this exposed point. Fronting on the inner harbor, and subject to all types of inclement weather throughout the year, the plantings in this garden have to be "sustainable" in more than one sense.

Though I work in Manhattan, I have gotten to Battery Park to see the gardens only two times in the last six years (I'm ashamed to say, especially since I'm an admirer of Oudolf's work). So this was my first view of the Battery Bosque, and that only as part of an excursion by water taxi to see Olafur Eliasson's waterfalls installations. And I have only visited in August, when the plantings have already endured the heat and drought of a New York July. Oudolf's plantings, with few exceptions probably having more to do with maintenance - a real challenge in a New York City park - than plant choice, remain in good condition. As expected with any Oudolf garden, plants passed their blossoming time retain structural and color interest, and other plants are still flowering even in the heat, with more coming on for the end of summer and fall. Below is a part of a large planting of acanthus thriving near the waterfront. (This is either Acanthus spinosus or Acanthus mollis 'Rue Laden' according to the Conservancy's plant list.) 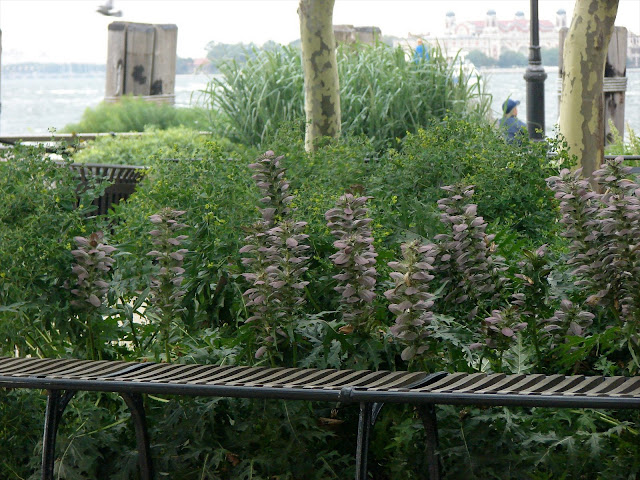 Nearby a planting of the all green form of Hakonechloa macra surprised me. This grass is used extensively in the Battery Bosque plantings, and it is among the best looking of the grasses even in the heat of summer. I would have thought it more delicate and less able to stand up to the stressful conditions in Battery Park. Even though the plane trees provide some shade, this is an exposed, hot and windy place in the summer. Perhaps the harbor water, only a few feet away, ameliorates the harsh conditions. 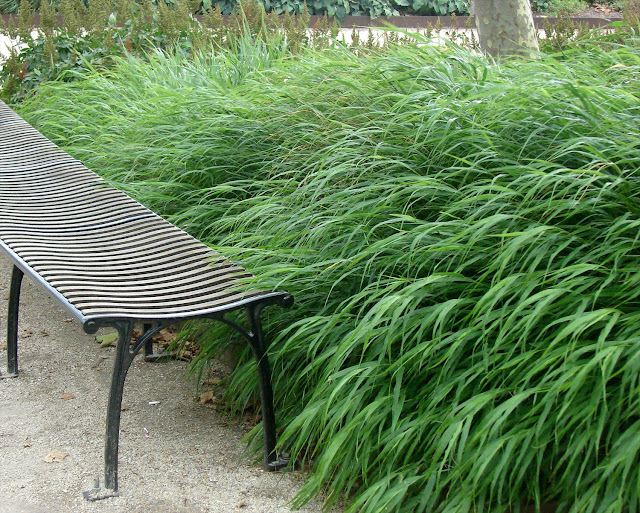 Toward the eastern end of the Bosque, Oudolf uses larger, bulky, tall, and geometrically interesting plants. Here prairie dock (Silphium terebinthinaceum), with its giant basal leaves and wiry flowering stems, emerges from a bunch of rattlesnake master (Eryngium yuccafolium) and, I believe, Little blue stem (Schizachrium scoparium 'The Blues'). Large mounds of Joe Pye Weed (Eupatorium maculatum 'Gateway') and Ironweed (Vernonia noveboracensis) block the view and add a sense of privacy in the background. This is like visual music. 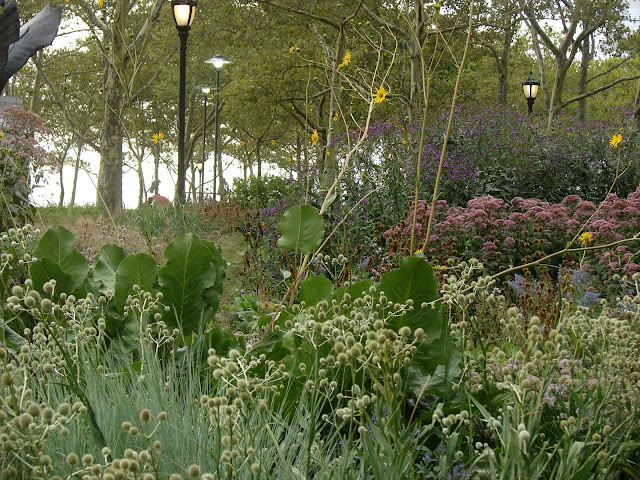 Below the contrasting shapes, textures and colors of Shenandoah switch grass (Panicum virgatum 'Shenandoah') and Mountain mint (Pycnanthemum muticum) are a study in one Oudolf design technique... 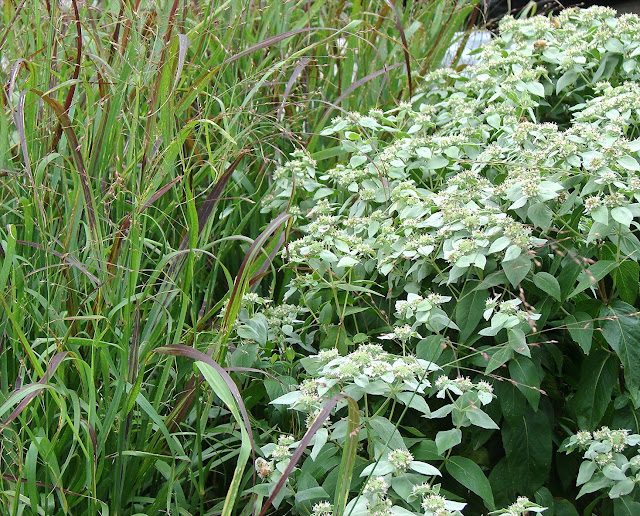 as are the long-lasting button-shaped seed heads of a monarda. 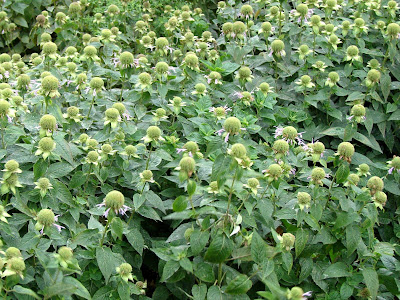 A large mass of Persicaria filiformis 'Lance Corporal' runs off into yellow flowering Patrinia scabiosifolia in a very "loose" planting that is illustrative of the underlying conceptual framework of the garden. The plantings throughout are arranged in variously sized, island-like elongated shapes on a ground of sandy soil that serves as the walking surface, so you move from island to island, observing a constantly changing palette of plantings (if you're lucky enough to enjoy such a wealth of herbaceous perennials; most park visitors seem oblivious). 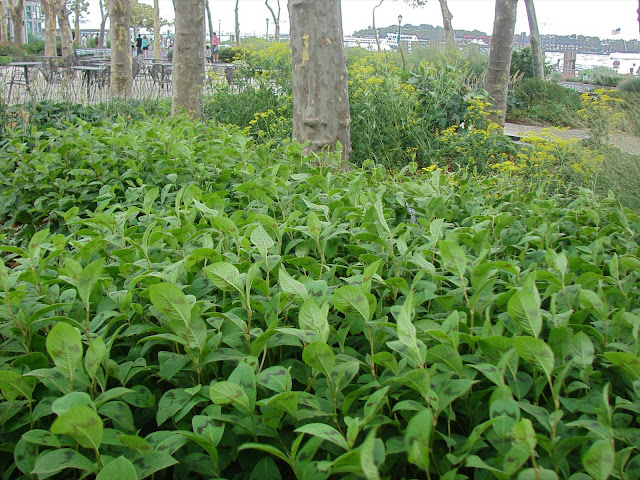 Two plants thriving in the sun and heat are Skullcap (Scutellaria incana and serrata) and the flowering onion (Allium angulosum). These are used extensively, and repeatedly, almost like a musical theme recurring throughout the garden. 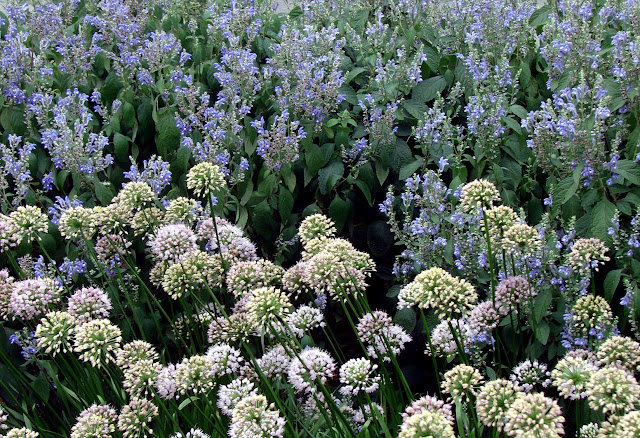 Here the plants are combined with Panicum virgatum 'Dallas Blues', whose flowers will add their drama later in the fall. 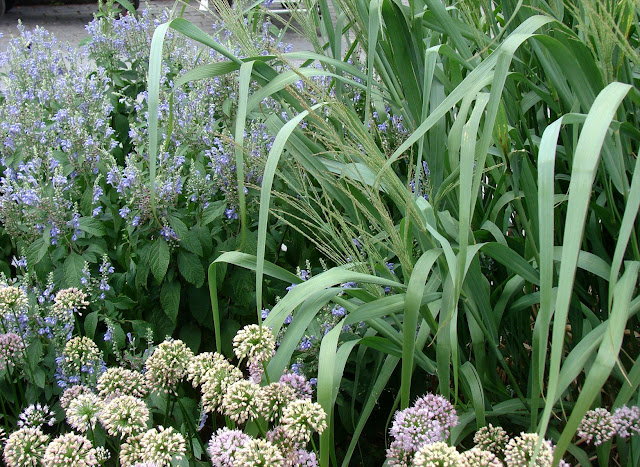 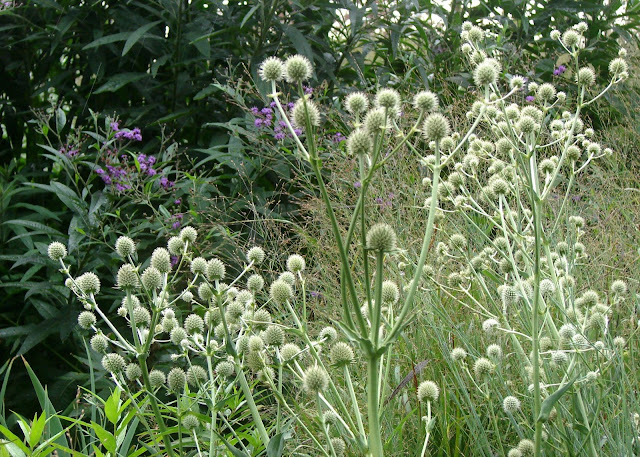 and a magnificent planting, with a Battery Park City building in the background, that captures the openness of the park and plantings. 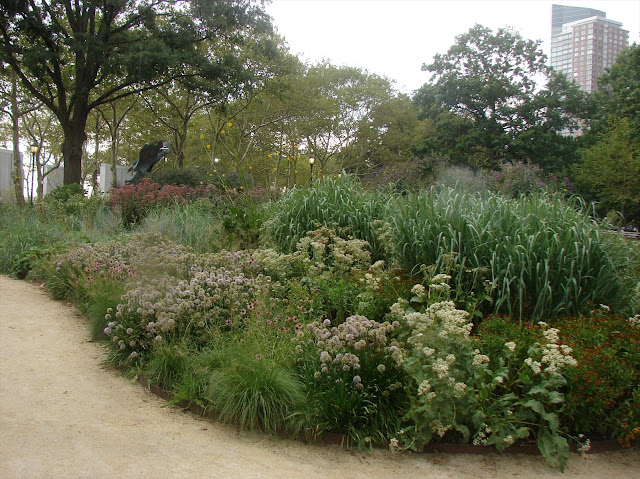 Another dramatic, and playful, use of Silphium terebinthinaceum, Panicum 'Dallas Blues', Joe Pye Weed, Eryngium and, in the foreground, a white flowering plant I don't recognize, even using the Conservancy plant list. 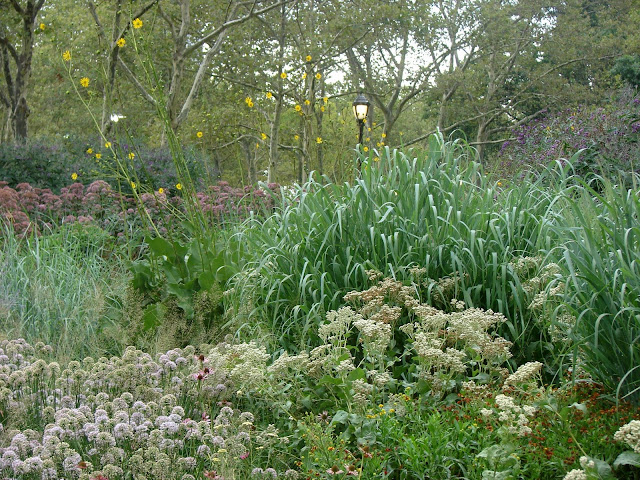 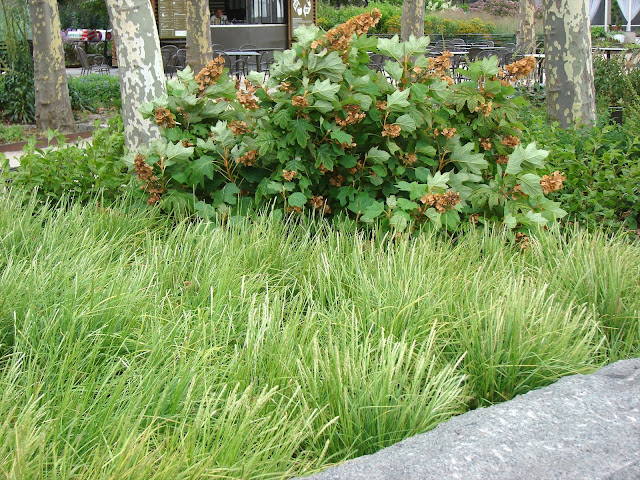 and another unexpected pairing of cardinal flower (Lobelia cardinalis) with Amsonia tabernaemontana. 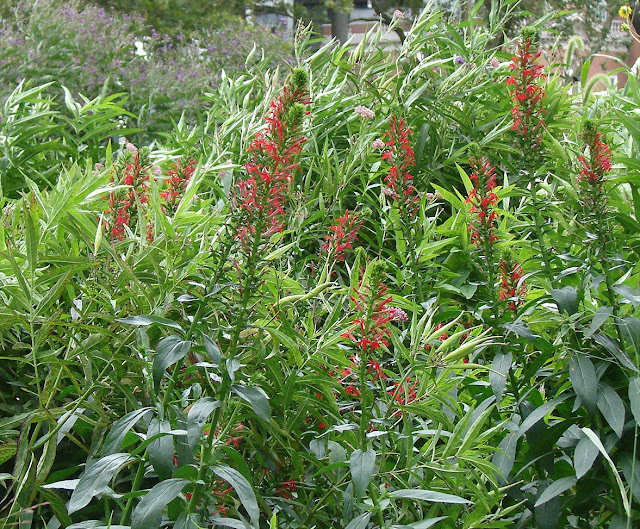 Molinia litoralis 'Transparent' tossing in the heavy wind before the approaching thunderstorm... 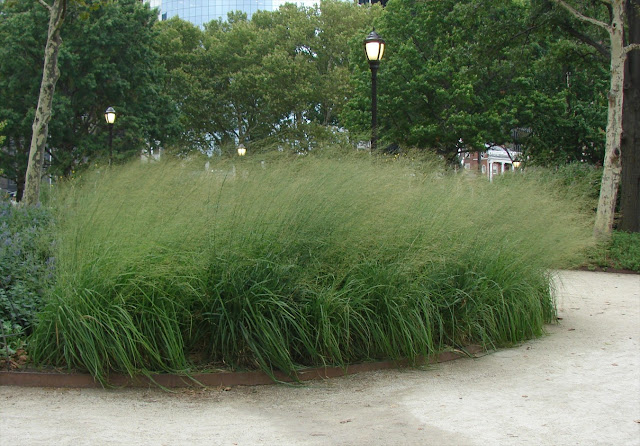 A beautiful study in texture and color: Crambe maritima. This appears tucked into only a few beds and is not on the Conservancy plant list, so it may be planted experimentally. 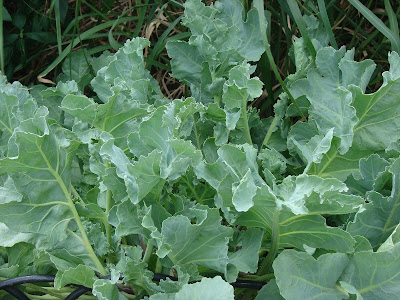 The distinctive form of toad lily (Tricyrtis 'Togen' or 'Empress'), another surprise; I know this as a woodland, shade plant, but here it's in almost full sun ... 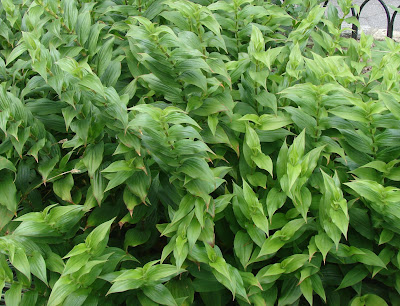 and here combined with Panicum 'Dallas Blues' and Allium angulosum ... 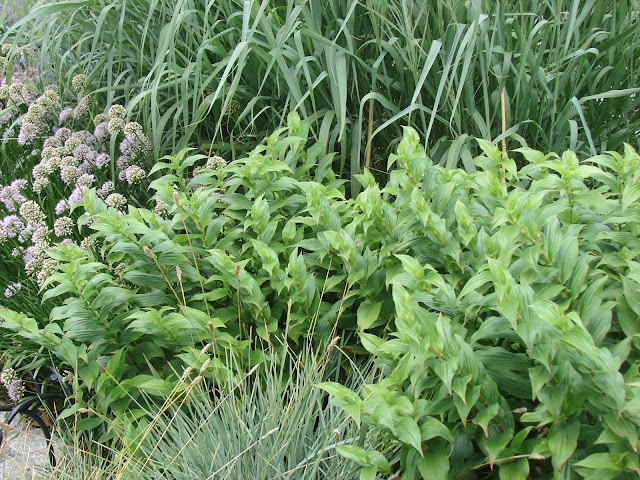 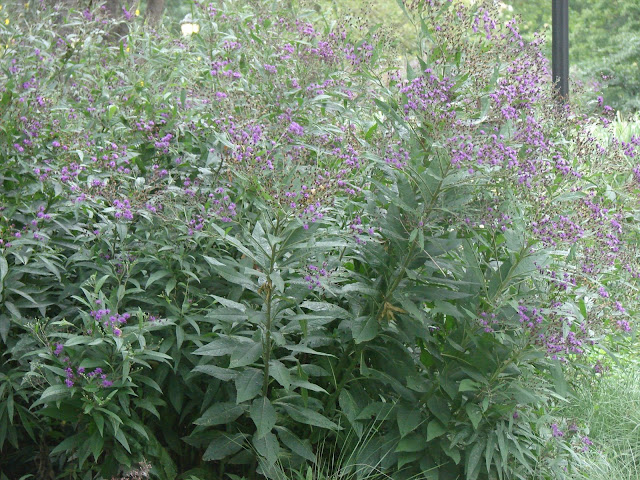 And another big clump of Vernonia (above), just because I love this plant. I think this native captures so well the naturalistic effect Oudolf is striving for in this highly artificial garden, planted in an exposed location, overrun with tourists, at the edge of the harbor, in one of the most urban settings in the world - a setting marked by the nearby great hole in the earth that used to be the World Trade Center.

And last a groundcover, a low blanket on the earth, used next to some of the tallest perennials in the garden, Clematis x jouiniana 'Praecox'. 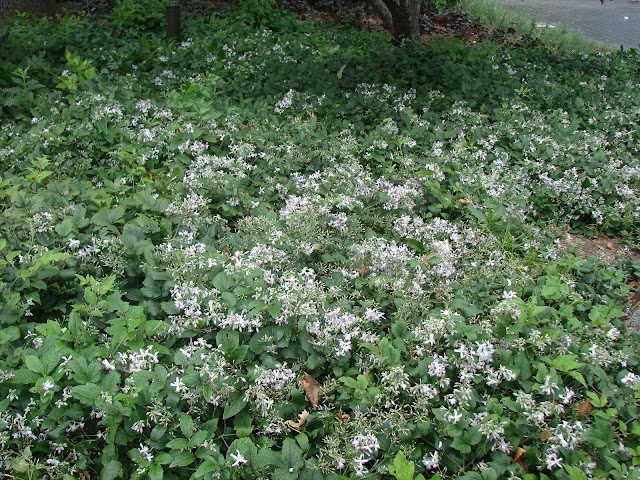 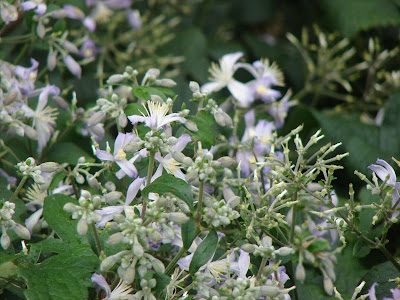 This is only a glimpse of the Bosque Garden in August, probably not at its best. I hope to get back this fall, and earlier in the season next year to see what's happening as the park's third phase comes into being.
Posted by James Golden at 7:23 AM