House and Garden in Delta

Making a garden "in tune with nature" means simply planting appropriate to place. But place can mean more than the physical environment. Consideration of metaphorical associations with history, geology, and culture add depth and richness to the experience of the garden. Place can be much broader than immediate physical surrounding; it can encompass a whole geographic region - even the entire earth - or the universe. Only consider the importance of astronomical observation among various cultures throughout history, or the many connections between gardens, theology, and spirituality. 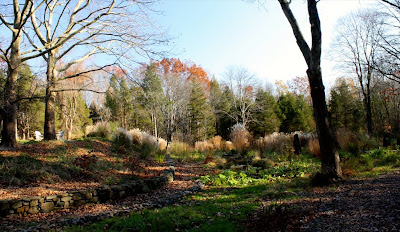 This is my garden viewed from the narrow area at the side of the house where overland flow of storm water builds into a flood before opening into what I call the "delta." It's a metaphorical delta. The river of water flows down from above, gains speed and deepens as it rounds the house, then breaks out into the wide area of the garden, very much like a physical model of a river delta. Perhaps I push the metaphor a little too far, but there are physical similarities between the hydrology of my garden and a river delta.

Phil and I just returned from visiting my sister and her family in Mississippi for the Thanksgiving holidays. One day, we drove into the Mississippi Delta, a unique physiographic province of extraordinarily flat land that used to be annually flooded by Old Man River. The satellite photo below shows just how distinctive the Delta is from the surrounding land. Starting at the Mississippi River, the tangle of curves and curlicues on the left, the Mississippi Delta is clearly demarked by the light shade of green, which ends abruptly at the darker green mass on the right where the hills begin. In many areas, this change is quite abrupt and dramatic. As you move from the hills into the Delta, the roads drop quickly down sixty or seventy feet, into absolutely flat land for as far as the eye can see. This land was flooded annually for thousands of years, and that ancient sign is still easy to see from above. 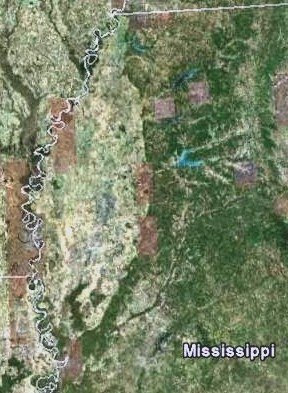 Since the 1930s the U.S. Army Corps of Engineers has decided it can control nature and hold the river in with levees. Everyone now knows that this process is doing irreparable environmental damage, causing the southern coast of Louisiana to disappear under the waters of the Gulf of Mexico, and eliminating the wetlands that could help protect such cities as New Orleans from future weather-borne disasters. The river rises higher each year, the levees are built higher to contain it, and eventually the process will become unmanageable. The river will break through and all will be changed, at great cost - environmental, human, and financial. 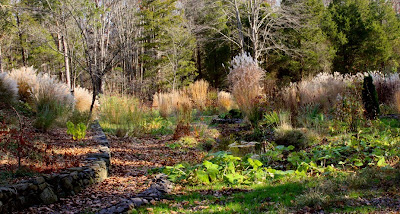 Unlike the Mississippi Delta, my garden delta has no such grand implications for the future. Or does it? Water defines both, and its use or misuse is a subject of some interest, at least to me. 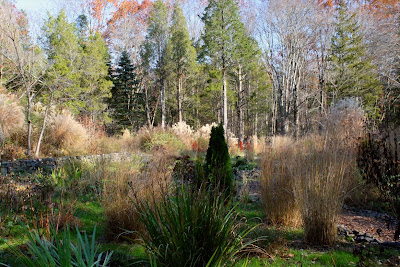 In my simulacrum of a delta, I garden in tune with nature. The plants that grow in the garden are well adapted to the saturated, heavy clay soil, frequent inundations during heavy rains, and standing water. Normally such conditions would create perfect breeding ground for mosquitoes, but the huge frog population eliminates that nuisance. There simply are no mosquitoes. Going with the flow, accepting existing environmental conditions, keeps nature in balance. 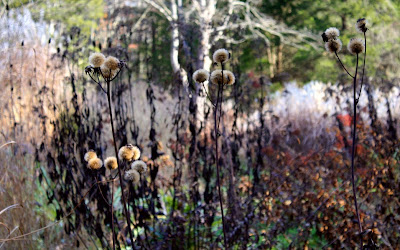 On a less practical, more aesthetic level, the garden complements the natural woodland environment surrounding it as well as the understated design of the house - its low profile, gray-brown tones, wooden construction, transparent glass, and massive native stone chimney towering into the trees. The house has low visual impact because the architect, William Hunt, designed his houses to blend into their environments, using natural materials and minimal ornament, and lots of glass to bring nature inside. 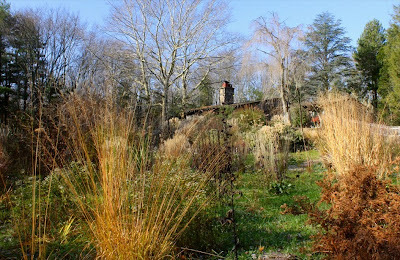 Out here, the sky is an important part of nature, and of the garden. Designed to complement its surroundings, the house is situated high, on a small man-made hill, where it is protected from the water and damp below, all the better to catch the light from the sky. In mornings and early evenings, it's flooded with natural light, as well as warmth from the direct rays of the sun. 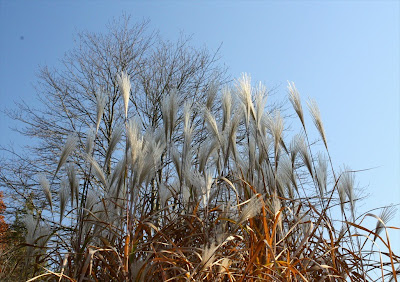 Above, a piece of sky, with a Red Maple, and giant miscanthus (Miscanthus giganteus) in plumy splendor. Who is to say my garden ends at its physical borders or in this time? In my mind, it encompasses the distant Mississippi Delta, the farmers and millers who lived and worked these hills in the 18th century, the native Americans who looked up into this sky over thousands of years, the inexorable geological processes that formed these hills, these rocks, this clay. 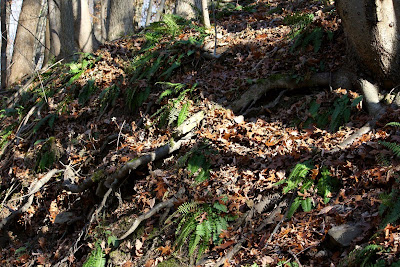 Christmas Fern (Polystichum acrostichoides) is an especially prolific native plant in our woods. Last weekend, driving down Stompf Tavern Road, an unpaved 18th century path, now road, that drops swiftly down to the Delaware from our perch on a ridge above the river, I found Christmas Fern growing in large colonies. It seems to have a fondness for steep banks, where it is well drained, though growing in heavy clay. 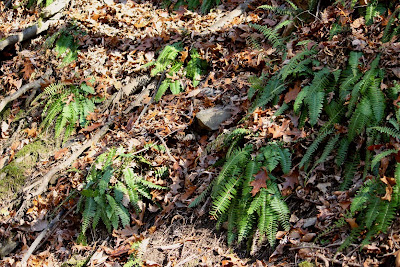 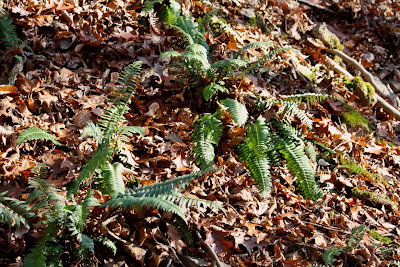 This is a view of the habitat carved by an intermittent, very steep, stream. 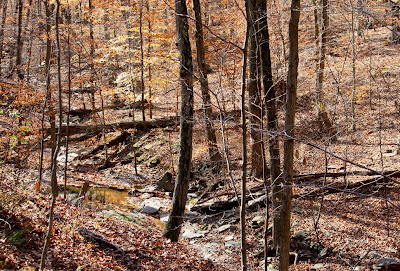 The diminished color of this season is fading fast. All the trees will soon be bare. 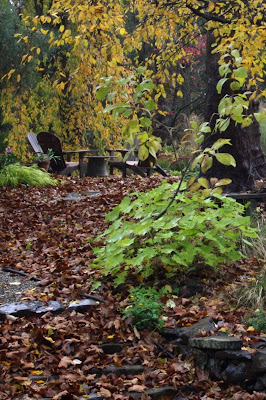 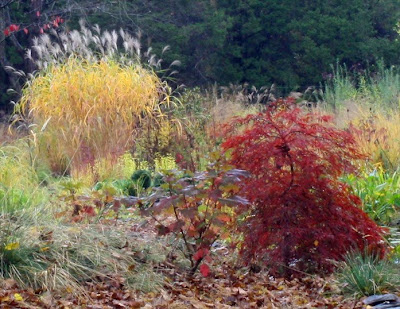 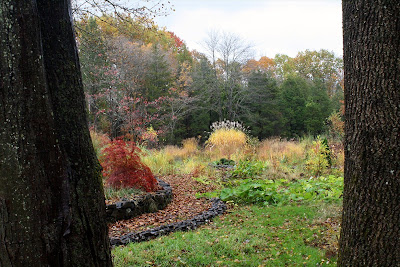 Moving out into the garden, which is starting to fall apart ... 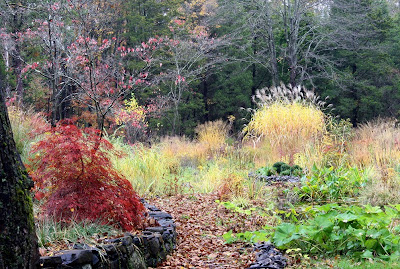 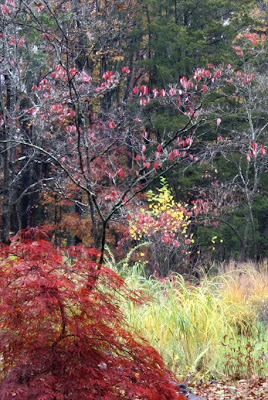 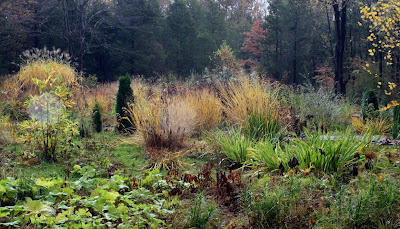 Rain drops on lens ... wider views of a sea of vegetative wildness ... 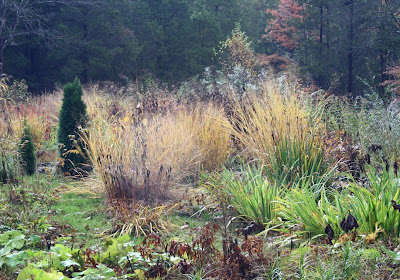 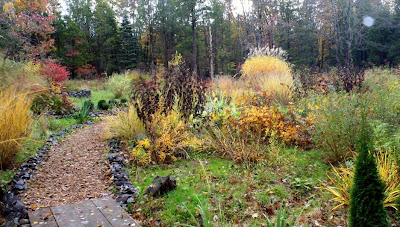 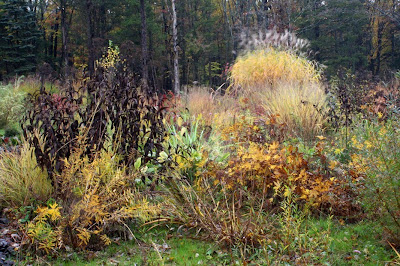 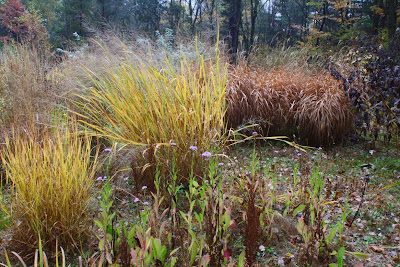 Aster tartaricus 'Jin Dai' (foreground above) is dwarfed by the wet clay environment, but it survives and even increases, adding late color, which isn't really visible in this photo. 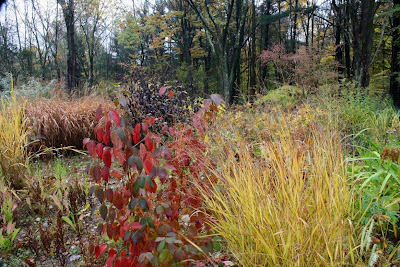 A 'legacy' virburnum I cut down during the mass tree clearing almost five years ago, recovering now, and to be a small tree in years to come. Panicum 'Shenandoah', a favorite grass, beside it. 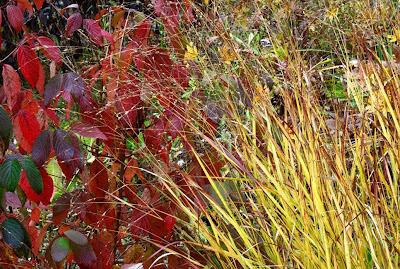 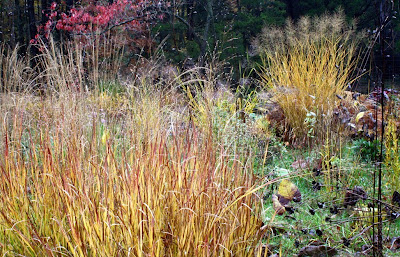 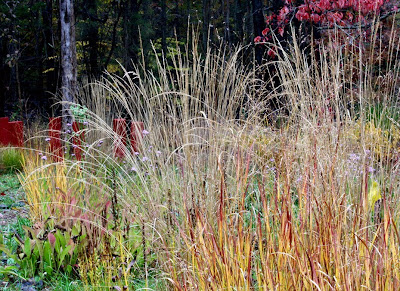 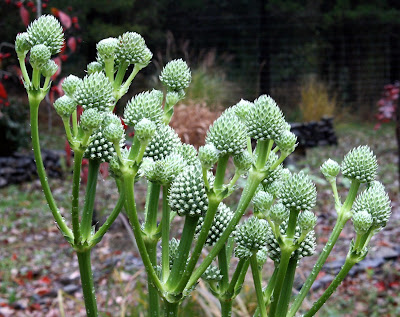 Eryngium yuccafolium - I planted several in a holding bed so they could grow to size before I place them out in their permanent locations. Now they've gotten so large, I'm afraid moving them will kill them. 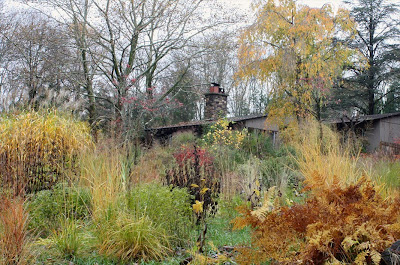 View back toward the house. 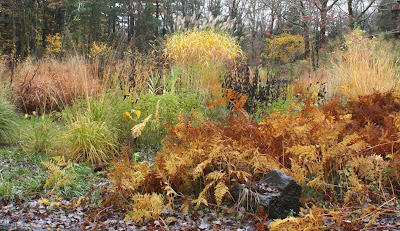 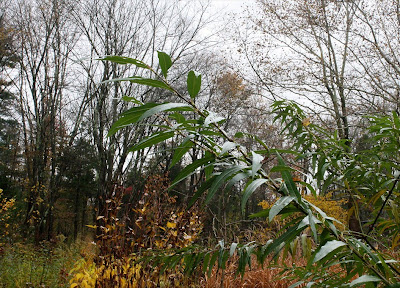