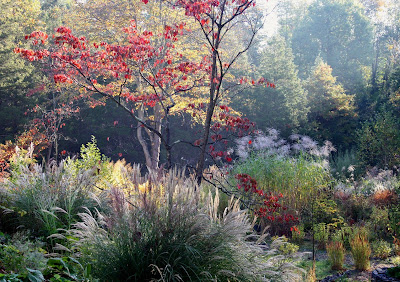 A dreary few days of rain is doing its bit to spoil what's left of melancholy autumn. The sun will certainly come out again and play across the dying garden, reviving opportunity for more uplifting views of autumn brew shot through with glittering shafts of light. But all that's left in my cold, wet clearing in the woods will be the textures and foliage colors of a flowerless season - quite unlike the late show of Garden Bloggers' Bloom Day. 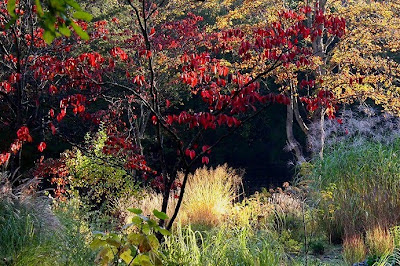 Frankly, I tire of pretty pictures and happy talk so prevalent among American garden blogs; I think this has more to do with American culture and its denial of the facts of life (of sex, death, suffering, rot and dissolution, take your pick) than with gardens or gardening, which can be and often are routes to deeper understanding of our place in this universe. Instead, we find art talk in design magazines, craftsmanship as commodity (very expensive, that garden bench, at $7000 per), white gardens, blue gardens, rose gardens, "English" gardens, and, lowest of the low, the pristine desert lawn and Disneyland. 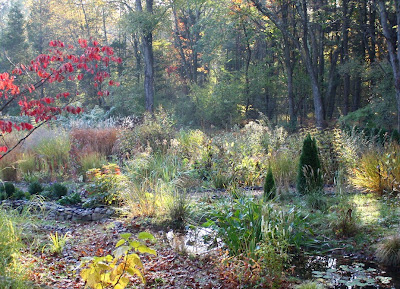 The focus of American culture on the frothy and the superficial, even the seeking after "sustainability," which has long ago been co-opted as yet another commodity, as has "organic," doesn't cure cancer, stop wars, end child slavery or work to prevent any of the many other horrors we wish to hide from our eyes. In spite of our diversions, we all ultimately find a path to realization of our own physical end. It's considered bad taste to write about sadness or the darker side of life, though that seems appropriate to our time. 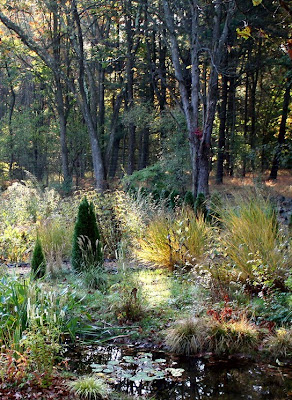 Around the corner from us, a man has put out a sign announcing he's a landscaper. The bank at the front of his house is covered in black mulch. He planted a few perennials, sun lovers, in deep shade (they died), and at the side are several large, complicated, expensive machines for moving earth and carrying heavy loads. What does this landscaper cultivate? Certainly not life. 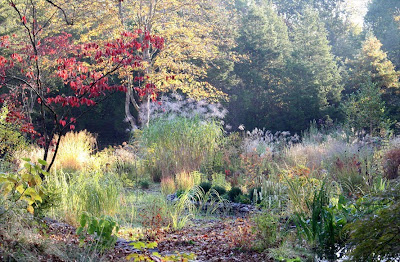 A first step to taking gardens seriously is to allow in the full range of human emotions. Until we begin to do that, gardens will continue to be relegated to the "hobby" category by the cataloguers of our lives. Gardening will remain a harmless diversion ... so long as the plants don't get too high.

Several times each year I see Great Blue Herons as I drive over Lockatong Creek on my way hither and yon ... but always from a good distance. Yesterday, working at home and pausing to look out the window, I watched a large, delicate creature, more gray than blue, with an astonishing wing span gliding across the garden, alighting at the pond edge just below the house. A frog plopped into the water and the heron jumped in to search.

I'm not sure what I felt. First surprise and excitement; I've never seen one of these wild creatures close up. Gratitude, curiosity, a little disappointment when it spied me and took off, rising in a long arc over the garden and into the trees. Admiration, wonder.

A couple of years ago one surprised me while I was doing some gardening chores. I heard a flutter and flapping above, and just caught sight of a dark, giant creature leaving the top of a Blue Atlas Cedar next to the house. And I remember thinking, had I lived in ancient times, I might have understood this as a visit by one of the gods, something wondrous, more heard than seen.

But we live in an age of reason, and I dismissed that wonder and surprise, knowing it was just a heron leaving a perch in a tree.

The pictures are of wild turkeys visiting my living room window (excuse the reflections on the glass). I didn't get a photo of the heron. 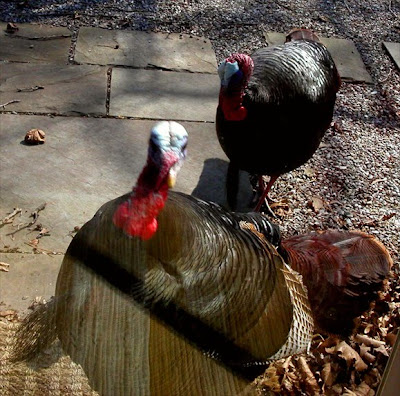 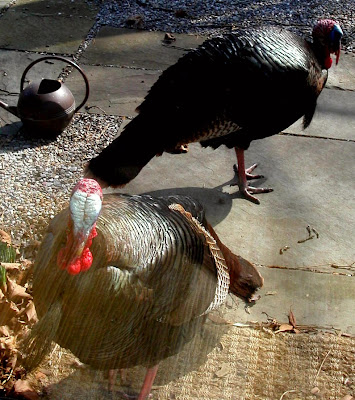 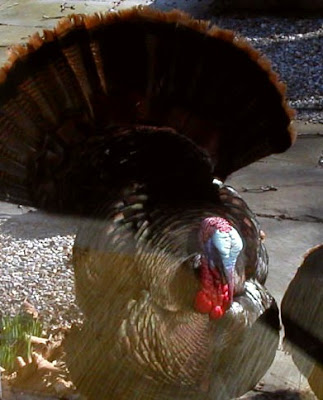 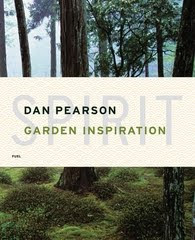 I've been waiting for Dan Pearson's new book since I first heard about it several months ago. What a surprise!

Dan, just about every one's favorite garden designer for the moment, has written a highly collaborative new book that has almost nothing to say about garden design. At least not directly. It is a beautifully produced book ... not a flashy coffee table tome, but a piece of fine, understated craftsmanship. The medium is the message, so to speak.

The book is about the source of inspiration for gardens ... a very romantic notion ... in sense of place. It's a book of stories, tellings of visits to particular people in particular places, bits of autobiography with emotional background - a book about feeling, sensitivity to place, memories, things learned.

I had anticipated not a "how to" of garden design, but a book about Dan's gardens (and I'd still love to see that book). But this one is so much finer for its difference from the expected. Spirit is quite Japanese in its method. It points a direction, like a finger lifted in silence, then leaves it to the reader to make the connections.

It's also an enjoyable read, one for contemplative moments, quiet times, but, surprisingly, it moves the reader along quickly, from story to story (who doesn't like a book of short, image strewn stories?).

If I may quote, since Dan gets the point across so well:

"Those gardens that use nature for their romantic gain, but strike that delicate balance between it being invited in and not quite having the upper hand are always in the balance. The most romantic moments at Painshill are those on the edge of being lost, the entwined stones in Nunhead Cemetery are the places with the most resonance. It is in this balance that I find the most evocative moments, the points where the magic occurs. I suspect that the ephemeral nature of these interludes is the greater part of their appeal, and for me, trying to capture them is part of the art of garden making."
If you want to know more about the stories of Painshill and Nunhead Cemetery, go get the book. It's finally out.

I understand from one of his associates that Dan Pearson will be coming to the US to lecture in January. He'll be at the Arnold Arboretum in Boston on January 19, at the New York Botanic Garden the morning of January 21, at Potterton's bookstore, 979 Third Avenue in New York in the early evening of the 21st, and the Chicago Botanic Garden on January 23. Perhaps his web site will provide details before January.
Posted by James Golden at 7:34 PM 7 comments

The old ragged dogwoods around the house become like vibrant Japanese screens each fall, calling to mind the layered, abstracted images in some impressionist paintings.
Posted by James Golden at 10:03 AM 4 comments