Phil and I visited Emily Dickinson's home in Amherst, Massachusetts, on December 11. I had missed the New York Botanical Garden's exhibition Emily Dickinson:  The Poetry of Flowers, but I think I probably experienced more of the real Emily--the person Holland Cotter refers to in his New York Times review as a "radically complex, sometimes cryptic writer and a troubled and troubling thinker as familiar with despair as with exhilaration, who found in nature reminders of death as much as of life"--by visiting her house, standing in her bedroom (a poignant, deeply moving moment), and walking the small landscape where she chose to live her increasingly reclusive life.

Emily lived most of her life here in the house she and her family knew as the Homestead. 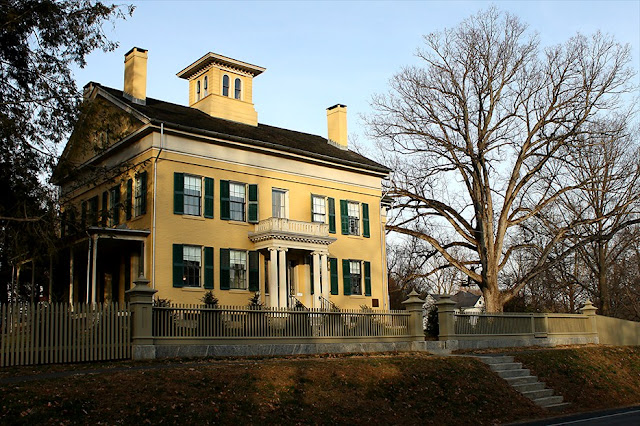 Her bedroom is in the upper left, and from it, she had a view of the small woods and path toward her brother's house. This small landscape and path was most of Emily's world. She sometimes would take her niece Maggie to her room, lock the door, and say to her, "This is freedom." National Public Radio has a very informative web page and podcast by Lynn Neary, which I recommend you visit for a perceptive view into Emily's world.

Emily's brother Austin was a prominent member of Amherst society, so his house was a center of social and intellectual life during that time. Emily was a frequent visitor there, and it was a center of her limited social life. Some of Emily's garden was probably in this area--we know the path was there during her lifetime--though there is also ample space for gardening around and behind the house, as well as a large lawn to the opposite side.

Much is unknown about Emily's motivations and her life. You can find the answers to some questions here.

Almost none of Emily's poetry was published in her lifetime, though there is ample evidence she viewed it with great seriousness, and at times reached out for encouragement from others who's opinion she valued.

This is a disturbing and haunting story, and I've carried a picture of Emily's austere bedroom in my mind's eye since that visit. One of her poems:


I heard a fly buzz when I died;
The stillness round my form
Was like the stillness in the air
Between the heaves of storm.
The eyes beside had wrung them dry,
And breaths were gathering sure
For that last onset, when the king
Be witnessed in his power.
I willed my keepsakes, signed away
What portion of me I
Could make assignable,-and then
There interposed a fly,
With blue, uncertain, stumbling buzz,
Between the light and me;
And then the windows failed, and then
I could not see to see.
Posted by James Golden at 12:18 PM