The garden seems to be evaporating before my eyes; the very substance of the grasses and herbaceous perennials, most of what's left, seems thinner, more fragile, week by week. As the garden reveals more and more of its underlying structure--largely invisible in the high season of growth--this is a good time to take stock, to look for underlying problems, if "problems" is the right word. Perhaps better to think of opportunities, to evaluate, to fine tune.

So I'll continue to mull over the newest part of the garden--the reflecting pool, which does indeed present a "challenge." It doesn't seem to fit where I put it! 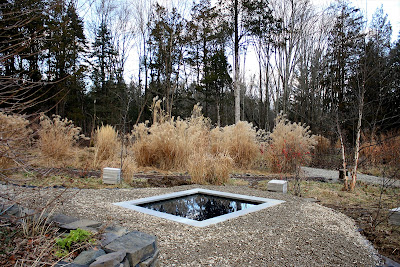 Snow last weekend, four inches of light fluff, just enough to cover the garden in a clean sheet, showed the pool in a new way, laid out in splendid isolation from its previously messy environment. In snow, the pool fits better, but only temporarily. 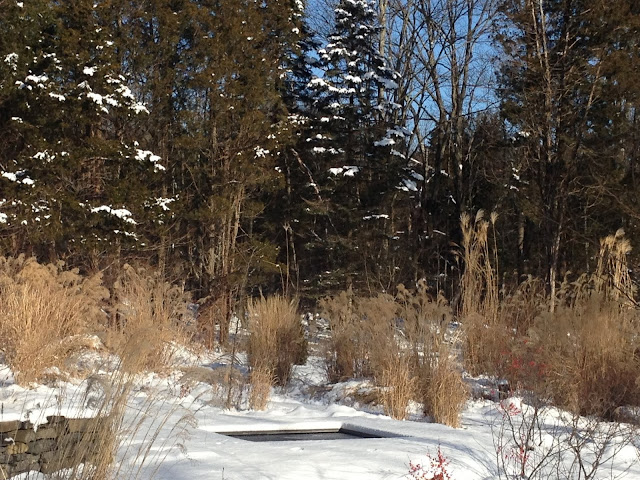 Judy Mann, a friend, was visiting and took these photos in the morning light while I was away at the gym (one of my few disciplines in life). As I look at them, they confirm, but by contrast, the approach I've decided to take to better integrate the pool into the garden.

Here (above and below) the snow erases the gravel bed, the blue stone coping around the water, other extraneous details. Truth be told I'm tempted to try for a similar effect without the snow, to take a minimal approach, though that would be very difficult since, without great expense, I can't level the surrounding area to make an ample, smooth surface for the pool to rest in luxurious isolation.

So of the two possible directions I could take in this part of the garden--toward openness, cleanness, simplicity, or toward enclosure, height, romantic fuzziness--I take the latter, which can be implemented incrementally, making it easier to manage cost. 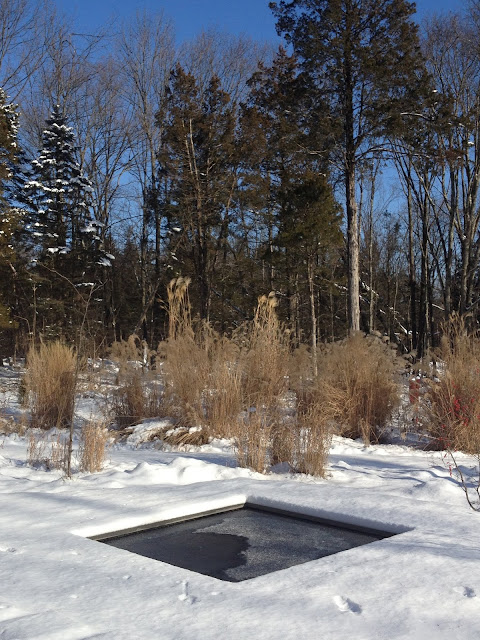 And to be honest, a minimal landscape feature would likely be out of character with the blousy naturalism of the rest of the garden. So perhaps my pocketbook and my aesthetics agree.

Below you can see the snowy outline of concrete pavers I've laid out in a trial pattern. I like this curve and the way it frames one side of the pool. The curve is an encompassing, welcoming gesture ... 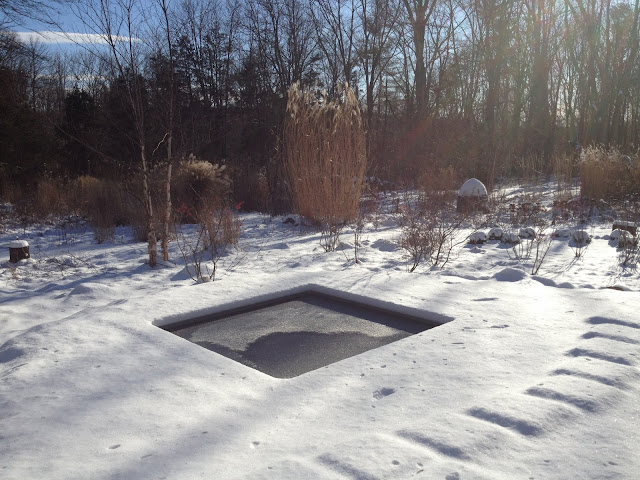 ... that focuses attention on the pool and on the garden beyond ... and begins a circular pattern that will be completed by the new plantings I plan around the pool area.

The key will be in the planting ... shrub spires, box balls, tall perennials like Joe Pye Weed and Inula, urn-shaped Miscanthus ... all forming diaphanous, three-dimensional screens that make the pool area like a circular room, a room with transparent walls through which you can catch glimpses in and out, as described in the previous post. 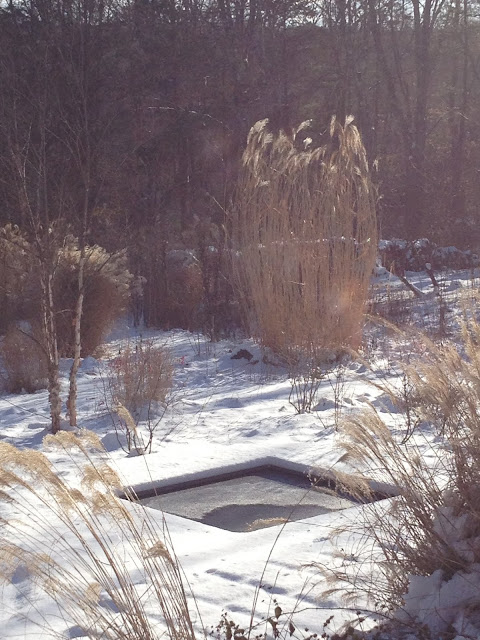 The Miscanthus giganteus, standing high and quite distant from the pool, illustrates how the interplay of vertical and horizontal will work. As with the tall, ragged Miscanthus and the flat, clean-edged pool, my plan to juxtapose verticals of Thuja occidentalis and grassy spires with the flat, two-dimensionality of the pool will create a sense of a secret place nestled amid dense plantings. The interplay of circular patterns, square pool, height, depth, sharp edges and soft, round shapes will make a pleasant place for contemplating reflections in the pool and appreciating the forms and colors of the surrounding plants.

The contrast of flatness and height will also emulate, in smaller scale, the contrast between the garden clearing and the tall trees of the bordering forest, more fully integrating the garden with its surrounding landscape.
Posted by James Golden at 7:29 PM