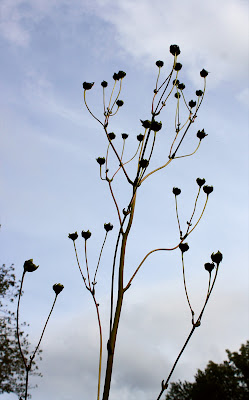 Planted as small plugs three years ago, the Prairie Dock (Silphium terebinthinaceum - now how do you pronounce that?) put up flowers this year. But that's an understatement. The buds are small round buttons like green peony buds, the flowers are pretty yellow disks, but the real feature, or I should say features, of this plant are the tall flowering panicles (eight to ten feet or more) and the huge leaves (think 18 inches long and 10 inches wide), which emerge in spring. These photos were taken in the first week of September. I almost prefer the seed heads to flowers. 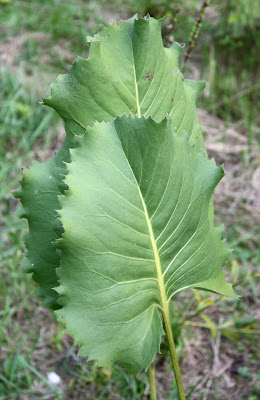 Posted by James Golden at 7:46 AM 2 comments

The Brother Gardeners: Botany, Empire and the Birth of an Obsession by Andrea Wulf 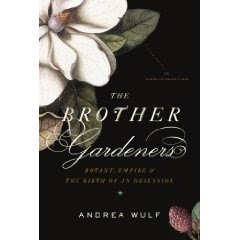 How do a modest Quaker farmer outside Philadelphia in pre-revolutionary America, a well-to-do cloth merchant in London, the inventor of the scientific binomial nomenclature that made possible universal identification of plants, and an enormously wealthy British nobleman with a passionate dream of exploration and discovery come together to affect the course of Western civilization? Quite simply, a passion for plants.

My interest in this book was sparked by the role of John Bartram, an intelligent and inquisitive farmer outside Philadelphia, and a friend of Benjamin Franklin, who happened to have an unusual affinity for plants and horticulture. Rising from his rather lowly beginnings, Bartram became a key figure in the importation of North American flora into Great Britain, traveling throughout the East to find new plants, eventually helping make possible the birth of the centuries-long passion for gardening among the British. His 18th century house and nursery are near here, on the outskirts of Philadelphia.

The Brother Gardeners is about a time when botany was the cutting edge of science. Advances in horticultural knowledge, invention of a universal system for classifying and naming plants, and the discovery and cultivation of new plants from the far corners of the world were among the highest scientific pursuits. Andrea Wulf weaves together these and other stories in a fascinating account that takes us from John Bartram's farm on the Schuylkyll River in Pennsylvania, to Peter Collinson collecting boxes of plants and seed from America on the London docks, to that most arrogant of scientists, Linnaeus, ruthlessly pursuing his new system for classifying and naming all plants, to Joseph Banks in England, a man with enormous wealth and courage enough to finance and risk his life on one of the first voyages of exploration to the South Pacific, guided by Captain Cook aboard the Endeavor, in pursuit of new plant discoveries, and in that pursuit discovering, by accident, the east coast of Australia.

Fascinating reading for gardeners with a historical inclination, this book brings to life one of those times in which apparently unrelated interests merge to move a culture into new directions. In the eighteenth century, when Britain was building an empire that would dominate the world, large numbers of the well-to-do were becoming entranced by new horticultural discoveries. They became a new moneyed market for the new plants, vying for access to the plants for their gardens, driving development of new technologies such as heated greenhouses for growing tropical species, and collecting vast herbaria. As plants became more important to the economy of Britain, interest in them spread and access became easier and cheaper, igniting a passion for gardening among the broader population.

Ms. Wulf's is a gossipy book - if a book on 18th century botanical goings on can be so characterized - and a well researched book full of treasures of information, quotes from letters we might otherwise never have opportunity to read, a book full of stories of the follies and amazing achievements of a group of intelligent, at times prideful and silly, and accomplished gentlemen and farmers to whom all gardeners today owe a debt.
Posted by James Golden at 9:52 PM 16 comments 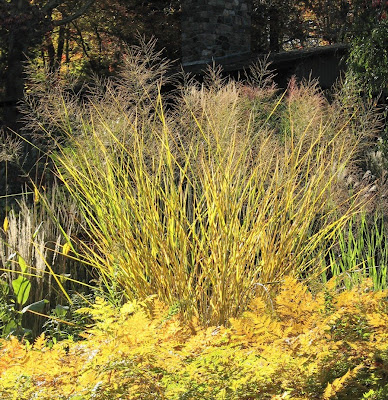 Here's my entry in the Gardens Gone Wild Picture This Photo Contest. One of my favorite grasses is Panicum 'Cloud Nine', so flexible in a breeze ... hardly has any substance it's so light and airy, even ethereal, but it holds up amazingly well late into fall. This was taken mid-October last year. Here it's fronted by a golden bank of bracken.
Posted by James Golden at 9:15 PM 5 comments 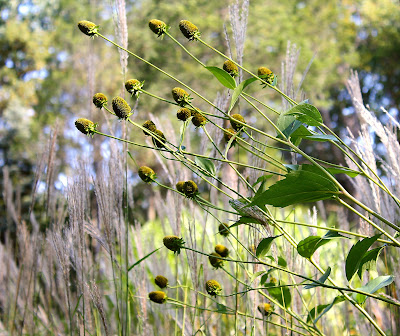 This rudbeckia is one of the most successful perennials in my unimproved wet clay. In my last garden in Rosemont, I banned yellow. Here, on Federal Twist Road, with a dark background of forest trees, the yellow brings much needed color and light. This plant thrives in partial shade, without any need for staking, while rising to heights of eight to ten feet. It has a great mop of flowers, and good looking, disease free foliage, year after year. And look at the marvelous seed cones (click photo for a closeup).
Posted by James Golden at 7:16 AM 4 comments

Links to this post
Labels: plants for wet clay, Rudbeckia nitida 'Herbstsonne', Seedheads in the garden 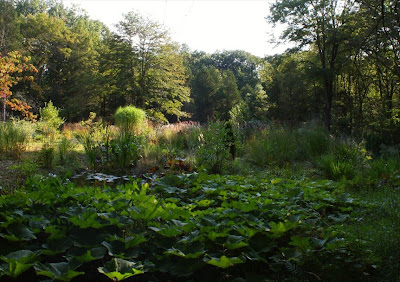 As fall approaches, and the sun moves lower in the sky, large parts of the garden are cast into changing shadow, hour to hour. Trees, capturing the wind, let through intermittent shafts of light, on the best days creating constantly moving patterns in greens, golds, pinks, tawny browns.
Posted by James Golden at 6:51 AM 3 comments

Garden Diary: The Planter and the Pond

The raised stone planting area on the left was intended to work as a visual extension of the linear pond. I can't yet say whether that concept is working. Two weeks back we cleaned out most of the growth, exposing the pond's edge for the first time since spring. I think a rough rock edging will improve things and help establish a better visual link between the two areas. 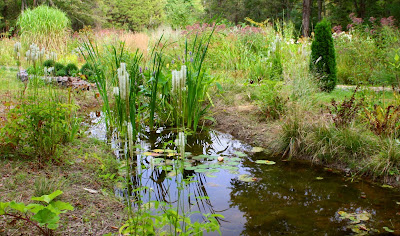 The raised planting bed will be mainly box (balls of Buxus sempervirens 'Green Mountain' with smaller Korean box) and Bergenia 'Bressingham Ruby', with a large Oakleaf Hydrangea at the pond end. When trimmed and grown for a couple of years, the box should make a single undulating mass, similar to the wavy box "clouds" I've seen in photos of Jacques Wirtz' home garden (may as well aim high). I know I should have used a single box cultivar, but these are what I found at my local nurseries. 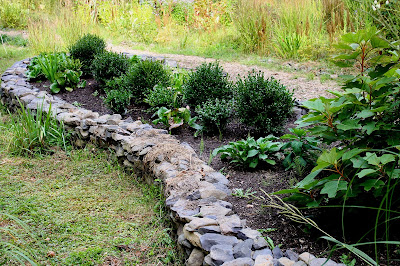 The far end (below) is much closer to the look I want to achieve, with the Bergenia acting as a ruffly ground cover. The self seeded iris is questionable; I'm not sure whether to move it over or just take it out. Probably the latter. 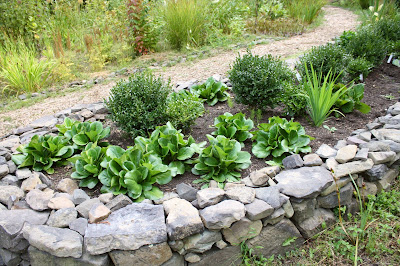 In winter the box will remain green (I hope) and the Bergenia will turn a deep burgundy. It should make an interesting winter feature, even if the box browns a bit. 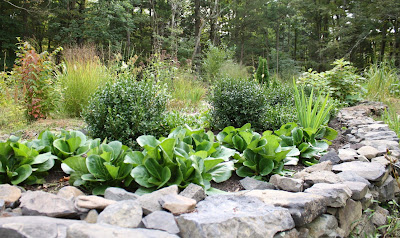 Yes, I need more Bergenia. Finding it is rather hit or miss in this area.
Posted by James Golden at 10:19 PM 7 comments 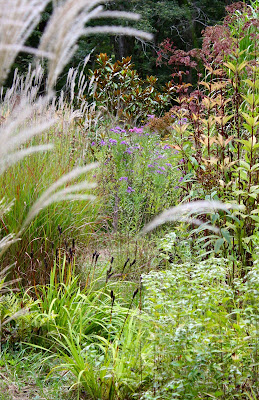 Okay, the Aster is no longer an Aster. I haven't got the new names down yet. This is the only one remaining from plugs I put out three years ago, and I need more for their color this time of year. I hope to get new ones in the spring and grow them on in pots until they're big enough to survive the rigors of my garden.

These plants all thrive in my wet clay, though this end of the garden is drier than the rest; a layer of broken rock below the surface (it's part of the septic system leaching field) improves the drainage .
Posted by James Golden at 7:26 AM 4 comments 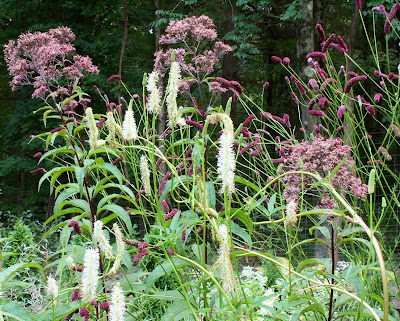