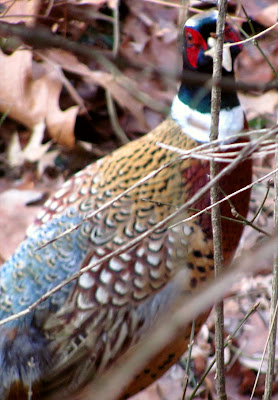 Glimpses of what I want the garden to be, of transitory phenomena, hints of mystery occur at unexpected moments. 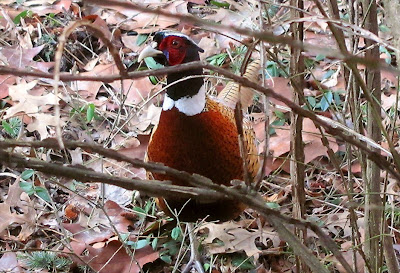 Yesterday I spied a pheasant just outside the house. It was quietly pecking at the ground, on the first relatively warm day following a long spell of extremely cold weather. I tried to catch some images through the window, with limited success. When I went outside, the pheasant quickly ran to the stone row at the edge of the land, then vanished into the woods. 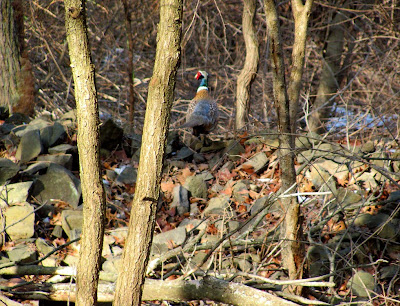 These unexpected and tentative encounters with wildlife evoke an ineffable sense of the hidden, the barely visible goings on, habits of life, things that are to me mysteries, hidden in the woods. They even recall those little known, almost lost lives and cultures that once existed in this place.

I want to capture this sense of mystery in my garden, and that's hard to do. Lack of knowledge of the past is one challenge. Another is topological. The problem is this. My house is on an elevated mound that overlooks the garden, which is flat and spread out in a way that makes it easily surveyed in a single wide view. I've added small trees and planted bulky and extremely large perennials, but the high main viewpoint and lay of the land still present a problem yet to be solved. In the summer, when I look back toward the house from down in the garden, I can capture that  feeling of  the half-seen, partially obscured - the sense of immanence I know is the nature of this place.

I may take a hint from these photos, which are not of the garden, but of the untouched woods in front of the house, where partial views, fallen trees, and the detritus of the seasons overlays the land. 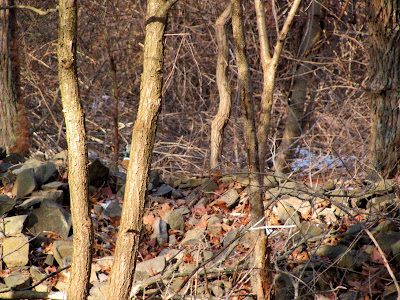 Labels: Mystery in the garden, pheasant