I burned the garden last weekend. With the mild winter, I thought the plants were waking far, far too early, so I burned before too much growth emerged. I usually do this early to late March. This was the earliest burn ever.

This post feels like self-flagellation. I thought several times about whether or not to show some of these photos. But here they are, in all their unpleasantness, the garden in half-burned disarray. 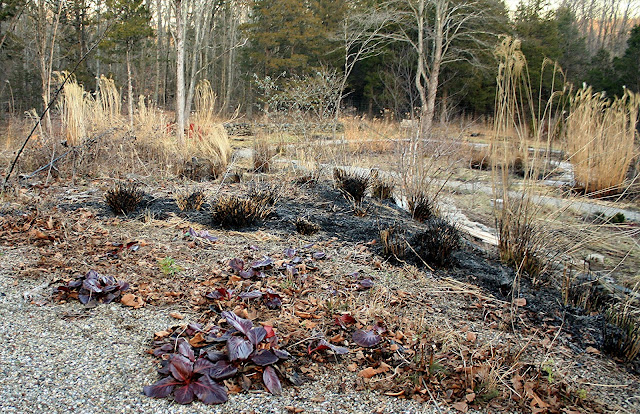 In another week or two the view will be much better. Empty, at least. The plants that didn't burn I'll chop down next weekend.

We also finished much of the work reconstructing the bed for the new pool; the way forward seems clear. 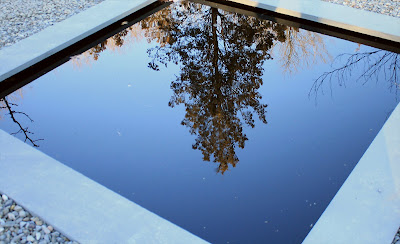 First, we rebuilt the low stone wall around the pool area, making it rectangular rather than curved. It now acts as a visual extension of the existing stone wall around the base of the house, relating the new pool surroundings to the house--using visually connecting rectangles as shown below. The paver path on the left is temporary; I just threw them down so I could walk across the mud. That's work for another day.

Another view below, showing how the pool area links to the house and its argillite stone chimney. 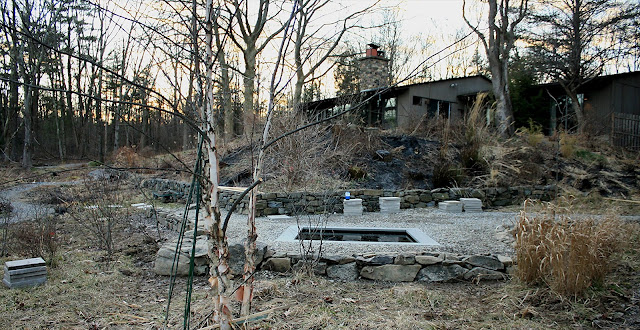 Details below show how the two stone wall segments look together ... 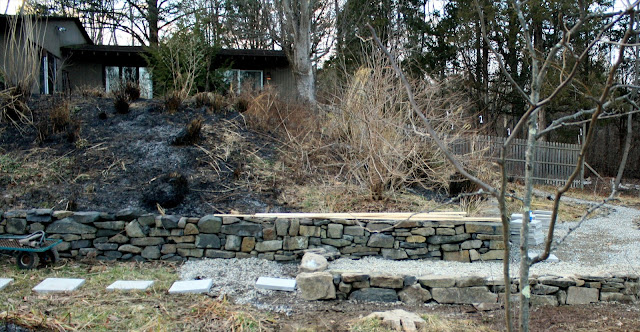 And three more views of the rectangular structure holding the pool ... 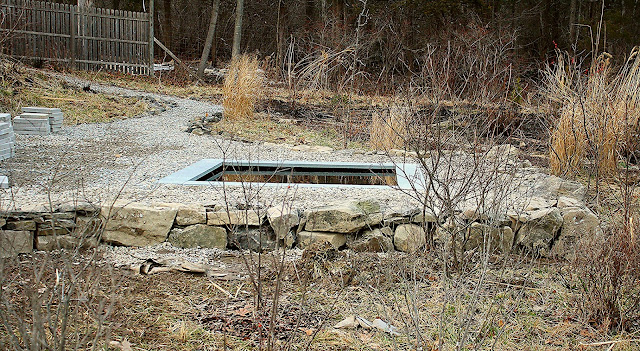 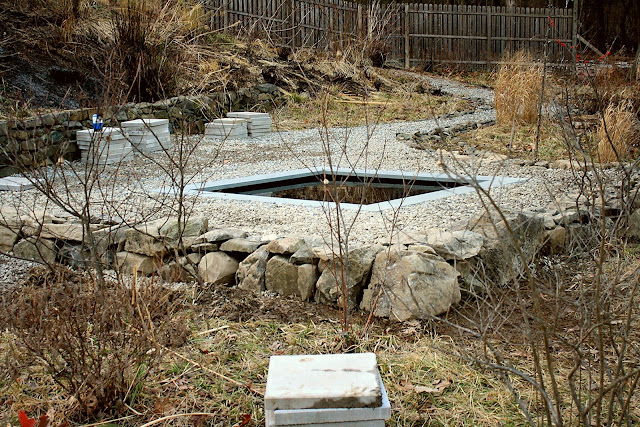 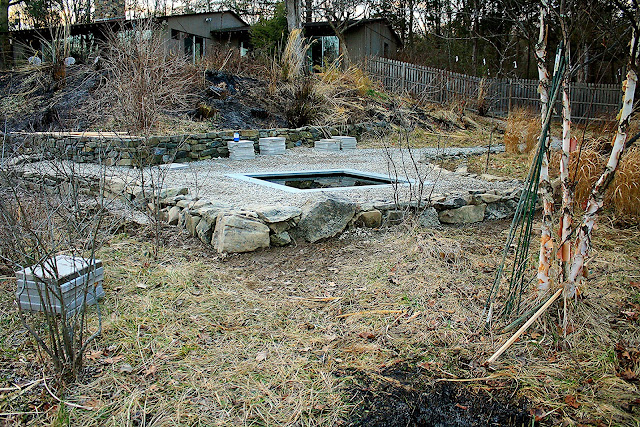 From a distance, the pool area almost disappears. When closely planted, as I intend, it will be private, almost invisible. This view is from a partially burned center area of the garden. Yes, ugly. 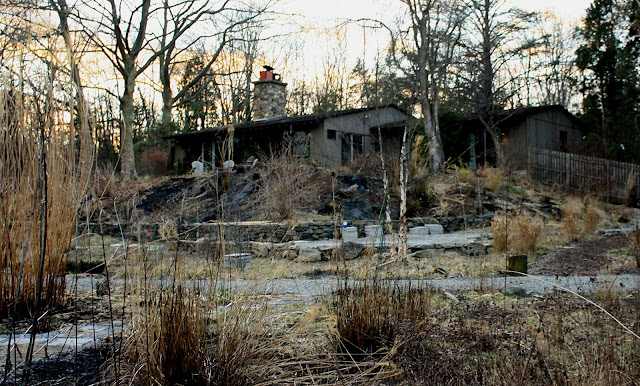 Below is an existing path. I may use something similar for the approach to the pool area. I want it to be narrow, so visitors enter one at a time. But this is only one option. 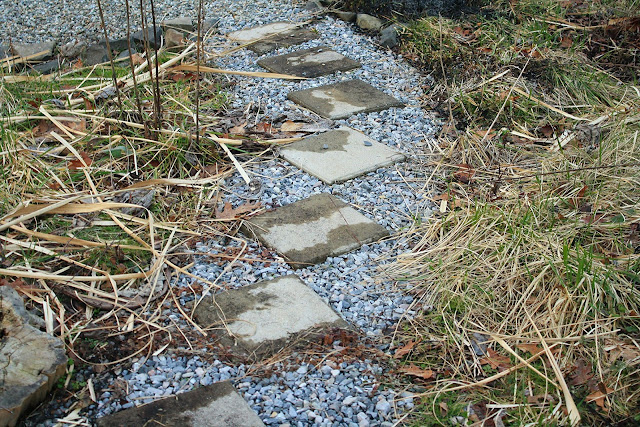 I burned this area too. Miscanthus giganteus (left) does not burn even when extremely dry. Some of the smaller Miscanthus behind burned incompletely. Too much moisture. 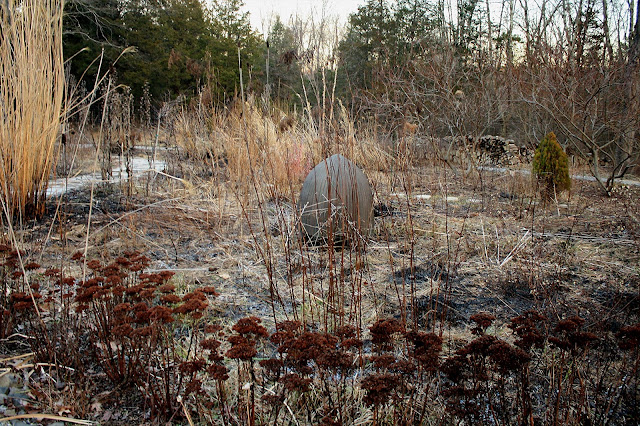 My preference would be to have waited another month or two, so I'd have some garden left to see. But spring seemed to be coming much too early.

I jumped the gun. I'd hoped for cold weather and I got it. It's 9 degrees tonight.

I think I should have waited to burn ... but the garden is resilient. 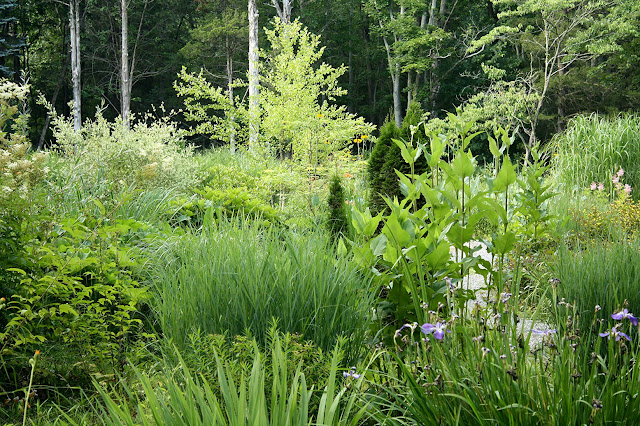