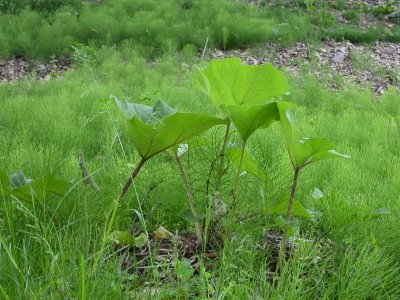 I'm planting in a matrix of native plants. Since I've cut trees to allow more light, I'm finding all sorts of changes in the "legacy" plants at Federal Twist. This week, I discovered Blue Eyed Grass for the first time since we moved here. I suppose it's emerged because of the brighter conditions. But the Blue Eyed Grass is only an incidental pleasure. The major components of the natural matrix are, at present, fleabane (Erigeron philadelphicus), a large, isolated colony of Equisetum arvense in a very wet area, numerous Carex and Scirpus species, and early season grasses I haven't yet identified. The matrix of equisetum is thriving and now forms an attractive blanket of soft texture that contrasts with the bulky form of Petasites japonicus and the sword-like spires of assorted irises that like the damp conditions.

I feel compelled to say a few words in defense of the fleabane. It's not the prettiest flower in the world, but in mass, it lights up the grasses and creates a lot of visual interest from a distance. I'm interested in using short-lived ruderals like fleabane to help prevent seeding of more pernicious weeds. I'm even hoping to displace some of the poison ivy and multiflora rose that keep so many visitors from walking in the garden. Over time, I expect the fleabane to gradually disappear as intentionally introduced plants become established and take up more garden space.

Placed amid the matrix of native grasses, carex, and sedges, plants with strong, easily "read" structure help give the emerging garden a recognizable intent and sense of order. Last year's planting was mainly experimental. Though I've researched plant selections, I really won't know what can grow here, in unimproved conditions, and what can survive deer browsing, without experimenting. One plant that came through the winter with flying colors is Rudbeckia maxima. The large, prominent, glaucous leaves are the main attraction. Planted in groups, and scattered in apparent random patterns, the rudbeckia will provide a strong visual interest throughout the year. The flowers, on tall spires, add vertical contrast, and with their long-lasting seed heads, remain attractive long into winter. 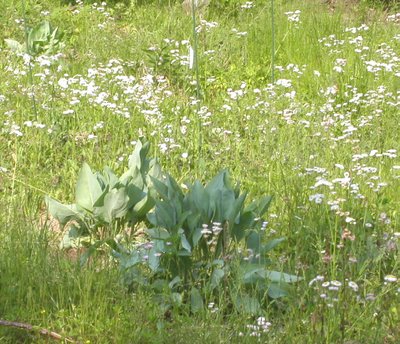 I ordered a flat of Silphium terebinthinaceum, which should thrive in my conditions. About half of them are growing. Their mature foliage, which is low but very large, should complement the rudbeckias, and their later bloom should add another feature later in the season. Do deer like to eat silphium? I'll let you know.

The verdict is still out on various Joe Pye Weeds, which I love. The emerging shoots have suffered some nibbles. Since this plant isn't a favorite of deer, I'm hoping the browsing damage is a result of the deer "taste testing," and the majority of plants will reach maturity and flower. Several Eupatorium cannabinum seem to be growing well with no damage so far.

The ornamental grasses, of course, are deer proof. More on that later. 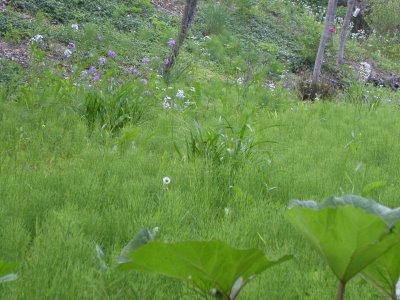 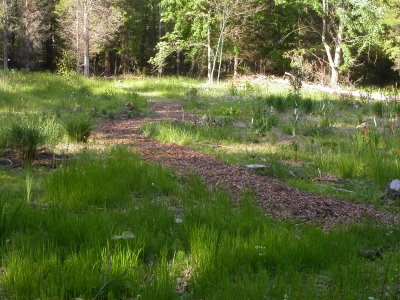 The future garden is a flat, rather featureless space, especially viewed from the house, which is situated on a raised mound about 15 feet above the surrounding land. Now that we're opening up the space - and the view - by taking down trees, the flatness of the land is more evident, even though there is a gentle, barely perceptible slope, moving away from the house, toward Lokatong Creek at the bottom of the hill.

I'd already been aware of the need to divide the space with screening (small trees, shrubs, large perennials) and to create spatial diversity, interest, and a sense of scale. Last weekend, we started laying out the secondary path of cedar chips through the middle of the space. (The main path will circle around from one end of the house, to the back of the garden, then back to the opposite end of the house. It will be twice as wide as the secondary path, at about seven feet.)

We got the cedar chips about half way across the field, then I cut the rest of the path with a string trimmer. Even in this unfinished state, the secondary path has reorganized my perception of the space, making clear where various plant communities, shapes, and forms might be used to make the new garden. Like a line on a blank canvas, the path suggests its own landscape, drawing the eye to previously unseen features, small surface undulations, rocks, native rushes, carexes, and equisetum.

Barely visible yet, a garden is coming into view.
Posted by James Golden at 9:21 PM 0 comments