The Far Garden at Rosemont - "far garden" because it was relatively far from the house - shows how quickly a herbaceous perennial garden can reach maturity. In only 18 months from installation of the first plants, I had a new garden that was entirely satisfying aesthetically and visually. Not really mature, because plant communities undergo a continuous process of succession, but certainly giving the appearance of a fully grown garden. The first photo shows the garden in early summer of 2004, one year from the start of planting.

I started this garden to block the view of a neighboring house. (Okay, if you're a passionate gardener, you know I really started it simply because space for another garden was available.) A wet drainage swale provided the opportunity; the contour of the land, which dipped and rose moving away from the house, brought to mind a pleasing arrangement of plants at varying elevations. I had the area dug out with a backhoe, and built two parallel stone walls about 30 feet apart, suggesting an old barn foundation. This gave me a sunken garden surrounded by stone, and two raised planting areas on each side. The next photo shows the initial excavation in the fall of 2002, with the dry-laid stone wall finished on one side. 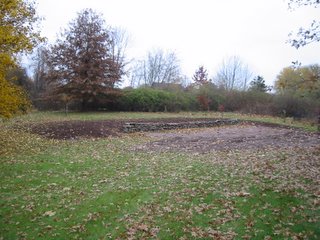 Planting started in the spring of 2003 and continued through that summer and fall. The next photo shows an initial rather random layout of the first plants. Doesn't look like an auspicious beginning, does it? In fact, the garden presented a bleak picture for the first few months. 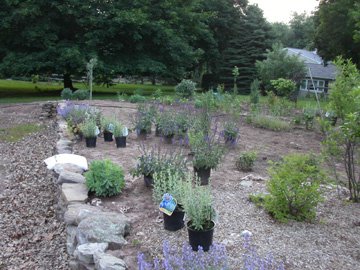 The plant selections weren't all my own: I had a lot of help. While browsing in Barnes and Noble, the cover of Designing with Plants by Piet Oudolf and Noel Kingsbury caught my eye. I was powerfully moved by the book: its photographic details of plant shape, texture, color, structure, and the rampant, almost tactile, beauty of the Oudolf garden photos. The big plantings recalled an Alice in Wonderland world. Huge plants, many towering well above human height, brawny Joe Pye Weed topped by looming purple flower heads, broad mounds of persicaria polymorpha crowned in foamy white, strict verticals of calamagrostis acutiflora 'Karl Foerester', grasses bending and sighing in the wind. The planting images, and the appreciation for all stages of a plant's life - even death in winter - hit my bullseye. This was my "wish book."

As I began the Far Garden, I was discovering a theoretical approach and practical direction for my efforts. I read more about European research matching plants to existing conditions - really just selecting plants appropriate to the local ecology. In Noel Kingsbury's stimulating, well informed writings, in particular, I learned of work done at the Weihenstephan Institute in Germany that resulted in a seminal work, Perennials and their Garden Habitats by Richard Hansen and Friedrich Stahl, which rigorously associated plants with their natural habitats, based on field trials carried out over many years. Stephen Lacy's "The New German Style" on the Horticulture website (see links) captures very well the essence of the New Perennial movement, tells the role of Hansen and Stahl in the movement, and offers a fascinating update, and stunning photos, on current German practices in such places as Munich's Westpark.

I gained the confidence to try gardening on my unimproved soil, for the most part heavy clay, very wet through winter and well into spring - selecting plants that by virtue of their natural habitats, would probably thrive in this environment. Instead of trying to recreate my soil by adding tons of compost and manure, improving drainage, building fences to break the wind, I decided to try a new approach - tilling the soil surface two times to turn under the grass, followed by close planting and weed suppression. I had learned from earlier experience that newly tilled ground in my area would quickly sprout millions of crab grass seedlings come hot weather. So I was forced to use a pre-emergent herbicide until the newly planted perennials covered sufficiently well to do their own weed suppressing. (Okay, we don't approve of chemicals, but I used them judiciously, only a couple of times.)

By the summer of 2004, I had a new garden that looked quite respectable, even under attack by an army of Japanese beetles. 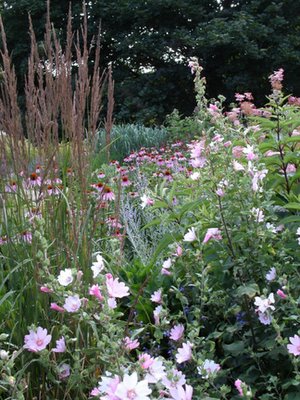 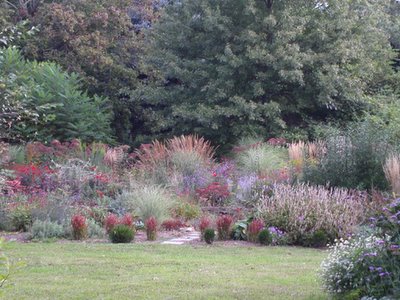 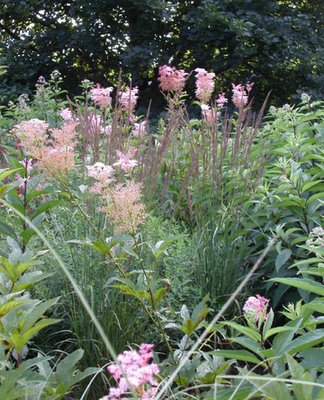 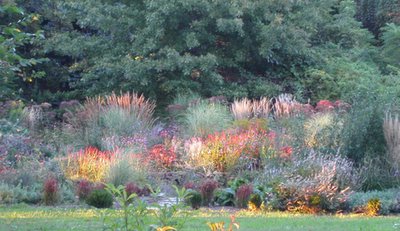 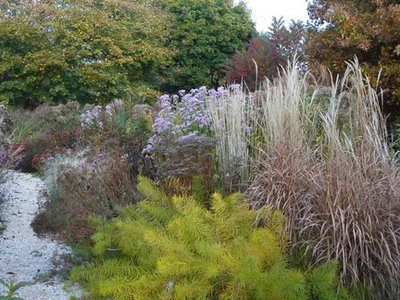 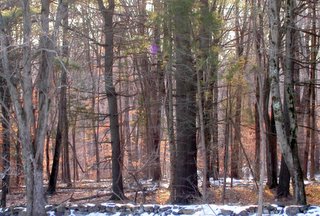 Now that the leaves have fallen and the sun is rising from a more southerly direction, it lights up the surrounding woodland each morning with slim rays streaming across the ground. The beeches are more visible now since they retain most of their orange-tinged leaves. In contrast, the woods behind the house are in a much earlier stage of succession and have few beeches, but the surrounding preserved land, which has remained undisturbed for a much longer time, has less undergrowth - and far more beeches, some approaching middle age. (I still have to deal with that woody tangle of cedars, scrub and vines that will be my garden.)

I hope to imitate the process of succession in my new garden, establishing a community of plants that adapts to conditions here, and develops through its own process of (controlled) succession. Echos of Planting Design: Gardens in Time and Space by Noel Kingsbury and Piet Oudolf, which I've been reading.
Posted by James Golden at 9:49 AM

I Dislike the Phrase "Sustainable Design" but ... 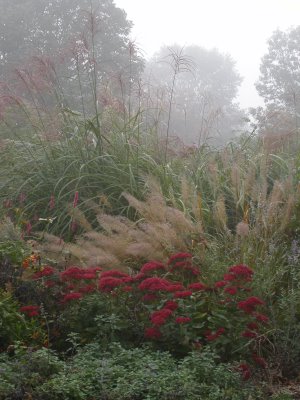 Since moving from Brooklyn to the country six years ago, I discovered an exciting, new approach to gardening. It revealed itself slowly, via books by Piet Oudolf, Henk Gerritsen, and Noel Kingsbury. In five years, I established a garden in the hamlet of Rosemont, New Jersey, that relied on the principles and plant predilections of what has been called the New European Style of Perennial Gardening. This met my practical needs (heavy clay soil, windswept location, enormous deer population, limited time), as well as my aesthetic preferences (more on that later). We sold the house and garden last year, and now I'm starting a new garden in an even less propitious location, on Federal Twist Road - thus the name of this blog.

Just as the house went on the market, I discovered I was selected by Horticulture magazine for the Grand Prize in their home gardening category (I have doubts about how serious that competition was). The photo above, taken on a foggy September morning, was the one selected for publication.

I hope to use this medium to explore where these and other gardeners and plantsmen and women have led me, to learn, and to share ideas with like-minded gardeners (actual or virtual). I dislike the sound of the phrase "sustainable design," but that's what it's about. Any suggestions on how to talk and write about a gardening style (philosophy?) that, as of yet, has no name?
Posted by James Golden at 3:52 PM 2 comments