Another round of navel gazing ...

In response to many helpful comments on my problematic reflecting pool design, I'm working on a solution suggested by Jill Nooney (bedrockgardens.org), a New Hampshire garden designer, in a comment on a recent post. She asked, "Is there any structure within sight that would reinforce an orthogonal theme"? That started me thinking about rectangles and squares, and how I could use existing geometry at the site to integrate the square pool into a rambling garden full of curves.

One of the notable features of my garden is the use of local stone, a very hard sedimentary stone called argillite. It is colored a dark blue-black, black, and many tones of grayish brown, is rather glass-like, and tends to shatter when hit hard or cut. It also makes a ringing sound when struck by another stone. This phenomenon is so notable argillite was called "blue jingle" and "blue jingler" in past times. I have plenty of argillite, piled into long stone rows by the people who farmed this land in the nineteenth century. I'm not sure what kind of farming they did, but there is evidence they had orchards, probably peach orchards. This was a large peach growing area back then, railroads were built to carry the produce to New York City, but a blight killed all the orchards, ending a thriving industry.

At present there are two prominent and highly visible uses of argillite in the Garden at Federal Twist:  a rectilinear dry-laid stone wall (see below) around the base of the raised hillock on which the house sits--effectively a plinth for the house--and a large, tall chimney (above) that rises probably ten feet above the roof peak, topped by an unusual curved, wing-like steel ornament, which is original to the 1965 house, the point being that the ornament draws attention to the chimney, making it more prominent than it would otherwise be.

Looking at the new pool area with the house in view (below) you can see how the chimney, the house (also a rectangle, though not of stone) and the "plinth" stone wall create a multilevel orthogonal construct, defining three descending parallel plains in the abstract. 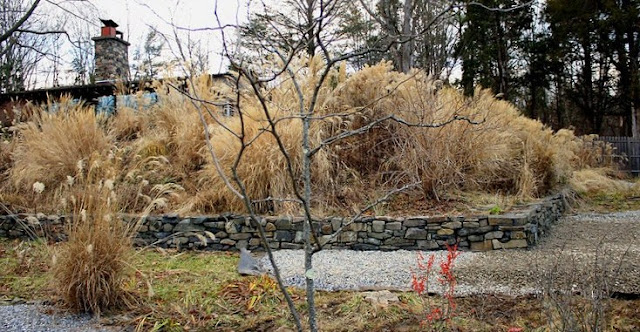 Now imagine a similar low stone wall of argillite to support the gravel bed, built parallel to and located four or five feet out from the existing stone wall. There you have it, an orthogonal base for the new reflecting pool, made of the same stone as the existing wall and house chimney. The rectilinearity, similar materials, colors and textures of the chimney, the house, the plinth wall, and the new gravel containment wall will reinforce each other and create a multilevel series of rectangular structures that provides a solid grounding for the square reflecting pool.

Last weekend we brought in a huge amount of argillite (below) to support the gravel bed. Unfortunately, I had it laid in curves. So imagine this stone relaid in straight lines to form a low rectangular support wall around the gravel bed. Parts of the new wall, the end at the left in the photo below, for example, need to be well laid in a neat pattern, emulating the existing wall behind, so they look essentially the same and visually reinforce each other. 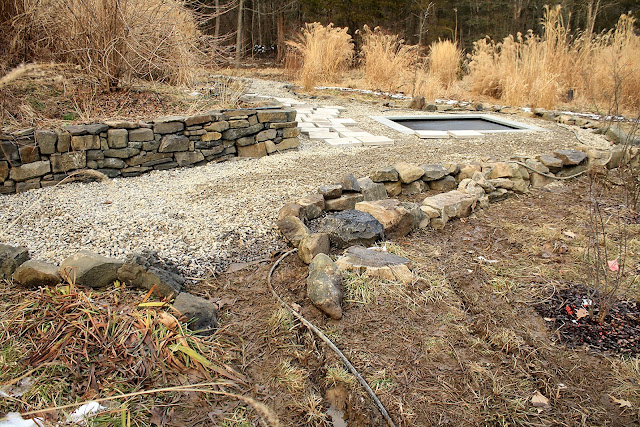 This new low wall will form a rectangle, or group of intersecting rectangles, extending out from the point at which the two parts of the plinth wall meet. No, I don't intend to move the pool, but I do want to adjust the gravel bed to shape it into rectangles and more closely align it with the pool. I plan to move out the concrete pavers, to level the surface of the gravel bed, and to work out a way to add planting pockets at the edges of the new low stone wall, creating small, better drained planting areas, and increasing my options for close planting around the pool area. 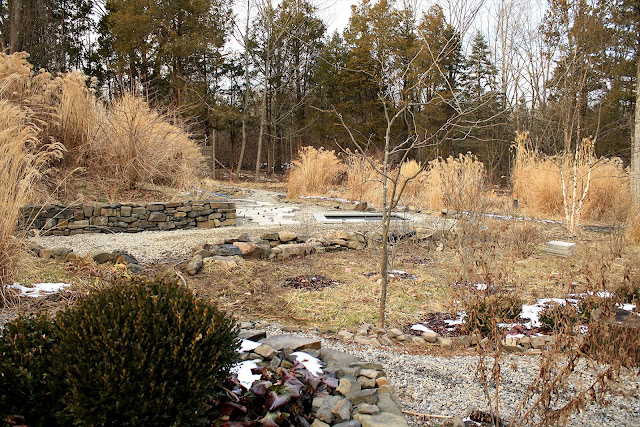 Below is a distant view of the pool area, showing the chimney, house, and plinth wall last spring after I burned and cut the garden. The new rectangular structure supporting the reflecting pool will appear to be an extension of the house and its associated geometries. I think it shows this "orthogonal design approach" may be the solution I'm seeking. 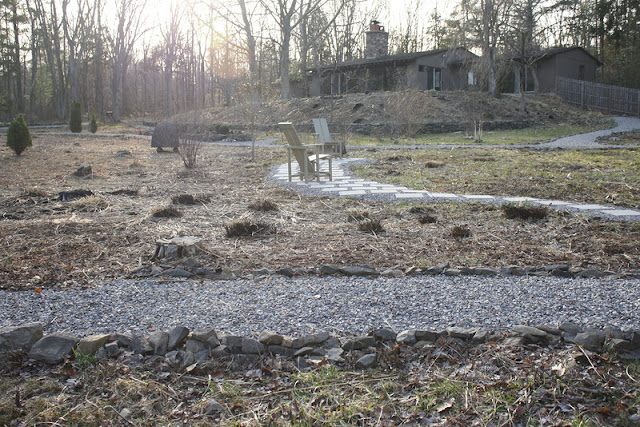 I'm reluctant to ask for further opinions, but I can't resist.

Just a reminder (below) of what you actually see from this distance earlier in the fall. 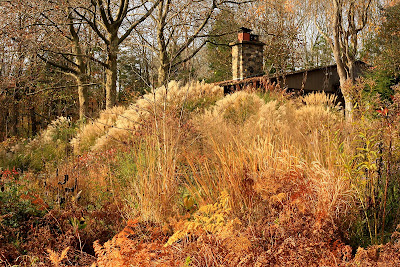