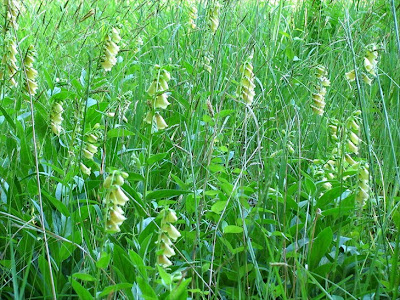 This was a surprise. Returning home from Paxon Hill Farm nursery, I took Covered Bridge Road, a small, little known byway. As I rounded a curve, I saw this colony of Digitalis ambigua growing in the grass on a bank. It looked so natural I thought it might be native, but I don't think any digitalis is native to North America. I've looked on the Internet, but haven't been able to find the origin of this plant. Is there a good, comprehensive reference for origins of plants we grow as perennials? 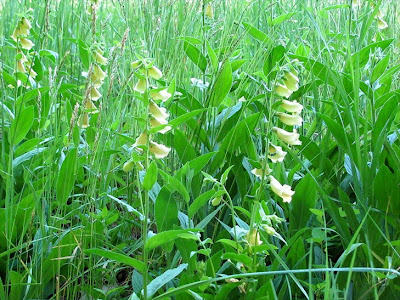 Yes, it's over. The 2010 Chelsea Flower Show in London is over (well, almost; the winners have been chosen). I'm posting a couple of links since the American gardening blogs I read seem to ignore this event. First, Tom Stuart-Smith's Laurent-Perrier Garden, in a 360 degree view, which won a Gold Medal. Andy Sturgeon's Mediterranean-inspired garden was judged Best in Show. My preference is definitely Stuart-Smith's tranquil, understated design. What's yours? Here is a link to more on the Guardian website.

And then there is "Do Chelsea gardens benefit from having 'themes'?" by Anne Wareham on the thinkinGardens website. This one may fly over your head if you're not familiar with Chelsea.

(The photo has nothing to do with the show.)
Posted by James Golden at 10:36 PM 4 comments 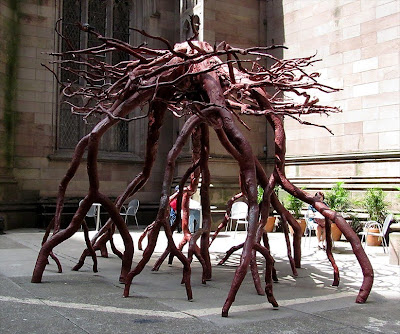 On September 11, 2001, a sycamore in the churchyard of St. Paul's Chapel, just across the street from the former World Trade Center, was knocked over by the fall of the towers. Trinity Root, which now stands outside Trinity Church in lower Manhattan, was created by Steve Tobin using the roots of the tree as the base for the sculpture.
Posted by James Golden at 12:43 PM 12 comments

Garden Diary: End of April, First week of May

This is a personal post to record what's happening here in this year, and to help me articulate for myself what I'm doing in the garden. You're welcome to read it if you find it of interest.

A brief, early heat wave has pushed the garden's growth so fast it's a little scary. No time for all the tasks I thought I needed to get done. All these photos were taken last weekend, and this weekend I already see several inches of new growth and greater definition of forms as the plants emerge from the undifferentiated green carpet of garden. 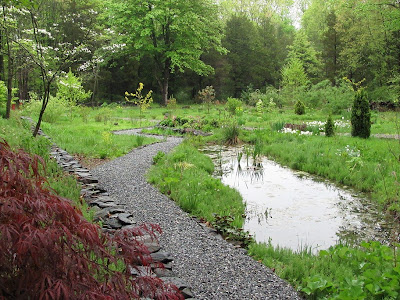 The graveling of the path by the little pond is almost complete. This is the base course, to be following by a layer of so-called "river washed" pea gravel. 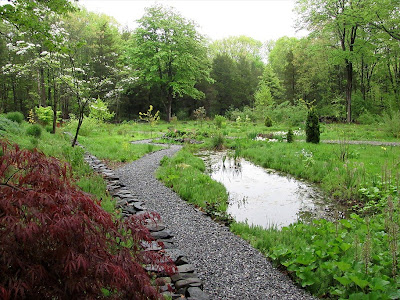 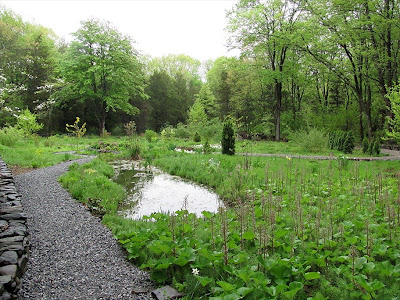 The next view is foreshortened using a small lens aperture. The willows at the back (Salix koriyangi 'Rubikins') are flayling in the wind. Three more to their left will soon obscure the view of the deer exclusion fence. 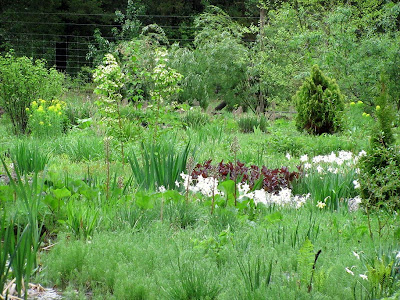 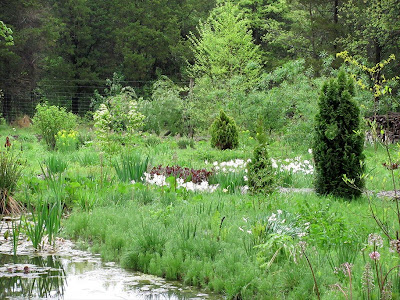 Below, on the right, the long, low curved stone wall has been given much greater visual prominence by the gravel path. This is now a major visual "armature" of the garden, creating a contrast between its rather severe, and serene, formality and the wildness of the central "prairie." 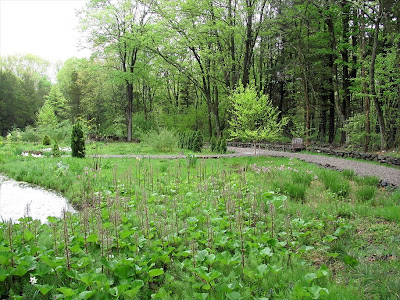 Here the direction of the stone path points directly toward the location of a second raised stone planting bed to be built further out in the garden; this will continue the "curving diagonal" begun with the pond and existing planter, across the garden toward the back left corner, where a new hornbeam hedge and sitting area will be. (I should credit Peter Holt for pushing me to do this.) This diagonal element also carries the eye toward the opening in the woodland wall (barely visible here) at the back, which is the major focal point of the landscape and the point to which all things "flow" visually. It's also the point to which all drainage flows and, as I've mentioned in other garden diary posts, the natural drainage pattern is what dictates the overall form of the garden. 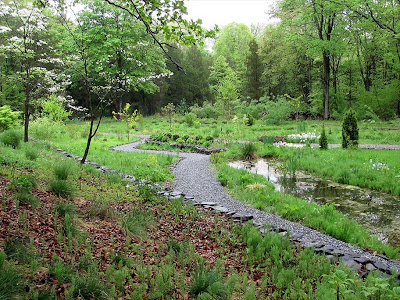 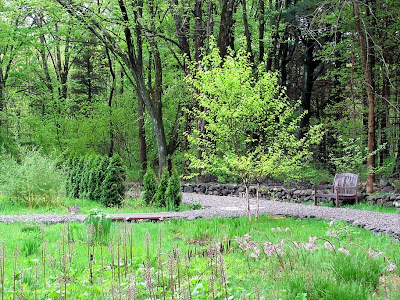 Backing up to the woodland entry garden (below), which isn't yet properly planted, you can see how this area is a path of flow for storm water around the raised mound on which the house was built. I just transplanted five large Rodgersias to the top of the curved stone wall, next to the cut-leaf Japanese maple. The bank is now covered by Deschampsia 'X' seeded five years ago, but I hope to turn it into a shrubbery of hydrangeas, buckeye, and other plants with foliage that will be fun to observe close-up while walking along the path.

The lower area has been cut to allow newly planted Senecio aureus, Acorus gramineus 'Ogon', and existing colonies of Matteuccia struthiopteris, pulmonarias, sweet woodruff, and ajuga to get a head start. 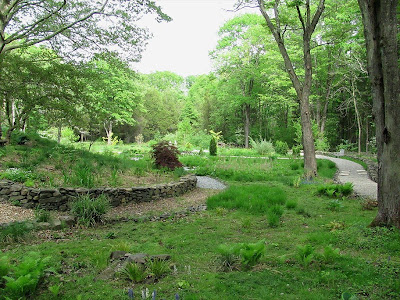 Potential for more planting here. The Kriengeshoma palmata on the right has filled in since this photo was taken last weekend and the Chionanthus virginicus above it has leafed out and formed flower buds. 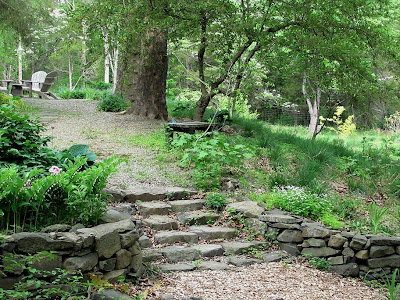 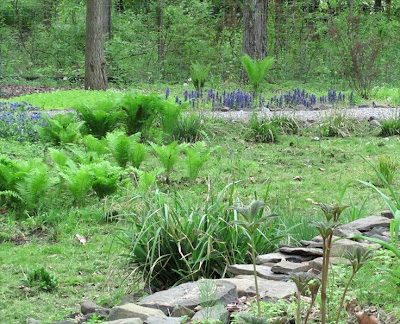 Aster divaricatus at the base of the tree (a couple of spreading colonies of this), newly planted Acorus 'Ogon', and Mattuecia struthiopteris. 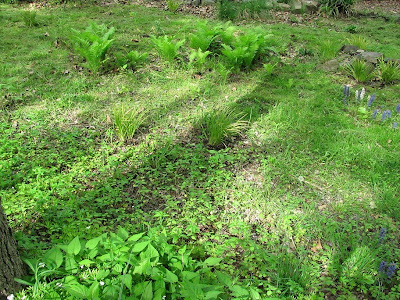 Collision of Pulmonaria 'Samouri' with other ground covering plants. We'll see how much human intervention is needed here over the next few years. The pulmonaria does so well I expect I'll plant more next year. 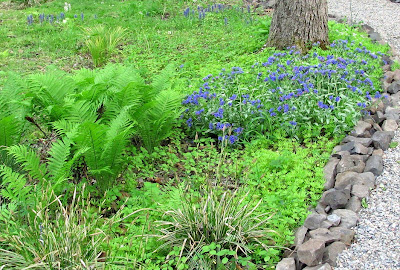 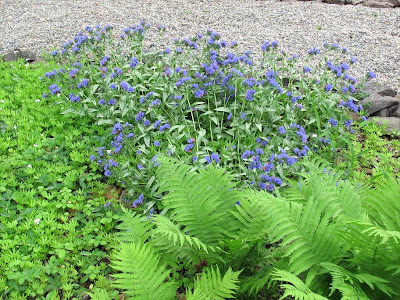 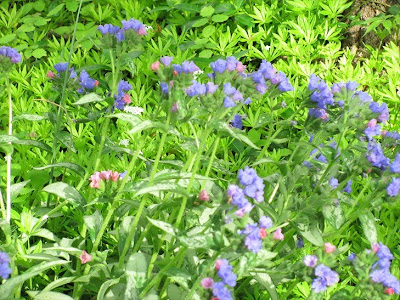 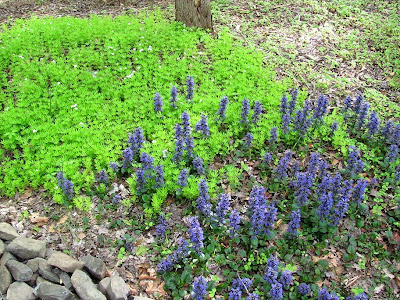 Arisaema triphyllum ... it grows all over, popping up year after year, with new colonies appearing all the time. One of my native stalwarts, with highly decorative, bright red fruits in the fall. 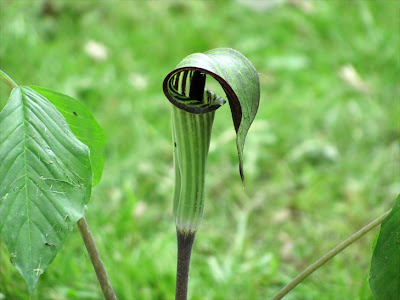 Another native, Podophyllum peltatum, also in spreading colonies, but it's a slow spreader. 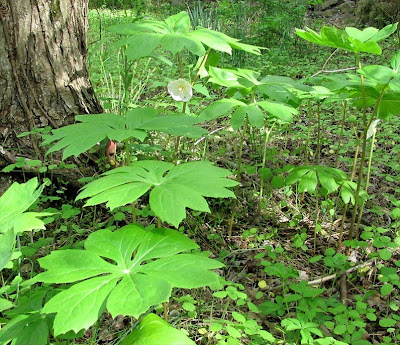 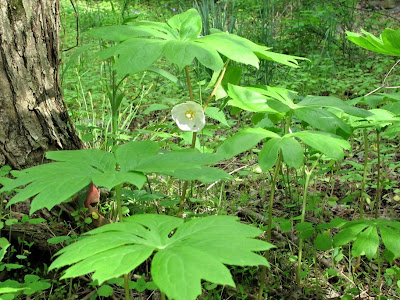 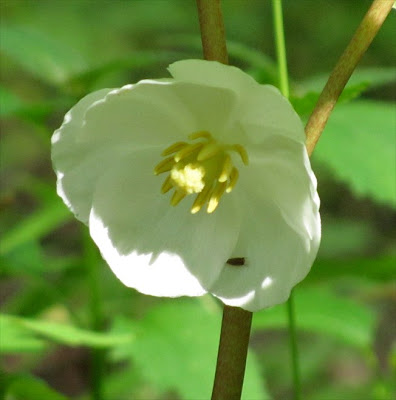 Back to the "Main Axis." Something for me to think about. 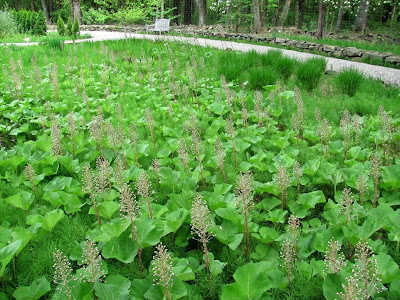 I'm reading Henk Gerritsen's Essay on Gardening, and I feel I've found a kindred spirit, though his knowledge of plants is formidable and far surpasses mine. In a sense, he's telling me the story of my garden, or his version of it. He's done it already.
Posted by James Golden at 11:48 AM 14 comments