I’ve always found reading a book to be a much richer, more multi-layered experience than seeing a movie of the same book. The inner vision of the mind’s eye is an altogether different thing. So the following text from Gardens: An Essay on the Human Condition by Robert Pogue Harrison struck a familiar cord. At the least, it’s food for thought. Maybe you’ll agree there’s more to it than “meets the eye.” (Yes, this is my second post quoting from this book.)


… a garden is a place where appearances draw attention to themselves, but that doesn’t mean they necessarily get noticed, no matter how much they may radiate or beckon the eye. Where appearances recede into the depths of space and time even as they come forward to stake their claim in the phenomenal realm, they make special demands on our powers of observation. That is bad news for gardens, for nothing is less cultivated these days in Western societies than the art of seeing. It is fair to say that there exists in our era a tragic discrepancy between the staggering richness of the visible world and the extreme poverty of our capacity to perceive it. Thus even though there are plenty of gardens in the world, we live in an essentially gardenless era.

I don’t know how to phrase this without sounding curmudgeonly, so I will simply assert as a matter of fact that among the young people I encounter on a daily basis—and I encounter quite a few, given my profession—most are much more at home in their computers, or in the fictions and skits that reach them on a screen, than they are in the three-dimensional world. In fact I have the impression that a great many of them no longer see the visible world at all, except peripherally and crudely …

[However] … it is not a question of generational deficiency but of epochal transformations in the framework in and through which the world reveals itself. The basic inability to see a garden in its full-bodied presence is the consequence of a historical metamorphosis of our mode of vision, which is bound up with our mode of being. For as our mode of being changes, so too does our way of seeing. The faculty of human vision is not neutral. It is as subject to the laws of historicity as are our life-worlds, our institutions, and our mentality…


In human beings the loss of eyesight does not necessarily entail a loss of vision. Vision sees cognitively and synthetically; it apprehends things in organized dispositions and meaningful totalities. This is another way of saying that human vision is above all a way of seeing ...

… we live in an age, then, whose dominant perceptual framework makes it increasingly difficult to see what is right in front of us, leaving a great portion of the visible world out of the picture, as it were, even as it draws the eye to a plethora of pulsing images. 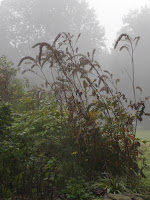