The garden on Federal Twist has always been a summer and fall garden--until the last couple of years. I've been making an effort to extend its interest into spring. There will always be a quiet, empty time from the cutting down and burning in early March until the first week of May, but this year, for the first time, I see real potential for developing spring interest too.

One of the signs of this is the evolving shady meadow in the wettest part of my woodland garden at the end of the house. From this distance, you can't tell much is going on, but a closer view reveals an emerging community of plants, some indigenous to this area, some not. I can see the need for stepping stone paths through here for close-up viewing. 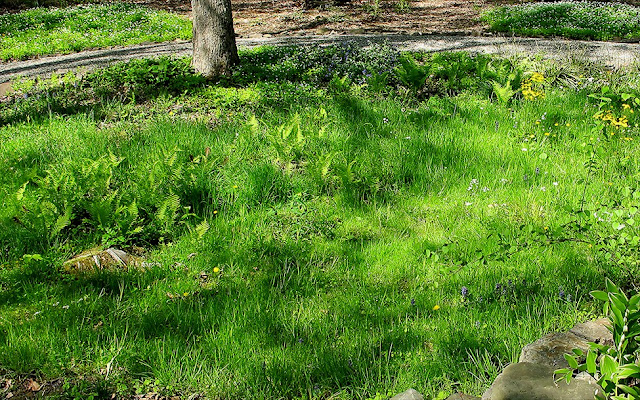 Senecio aureus (Golden ragwort) has been on the property since we moved here, so I added more last year. Though it's not a refined plant, it does spread and self-seed, and it adds bright spots of color at this time of year. Later, if the grasses get too high, it takes a high cutting with ease. The yellow also blends well with the dandelion flowers, which I've decided to adopt as wildflowers. 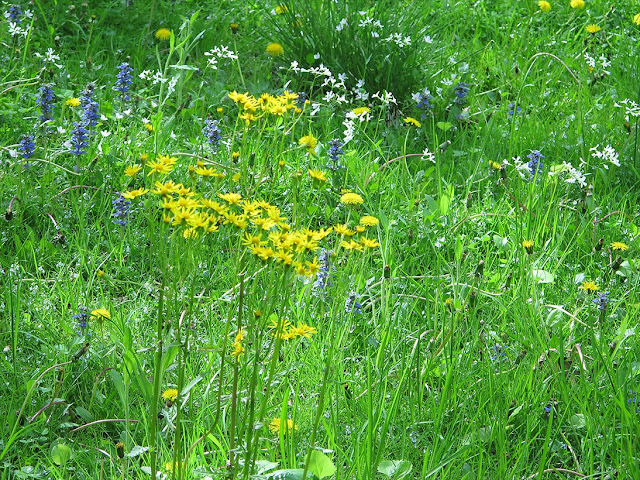 Blue Ajuga is rather prominent at this time of year. It's a legacy of the Howeth's, who built this house in 1965, and had been its only residents until we moved in in early 2005.  It too has spread far and wide, and adds to the weed-suppressing matrix of plants so I'm encouraging it to spread. The white flower appears to be a native wildflower. At first it was to be found only in the wettest areas, but now it too is spreading. It's graceful and quite delicate, easily crushed by wayward steps (thus the need for stepping stones). I wish I could identify it, but I haven't yet discovered its name. 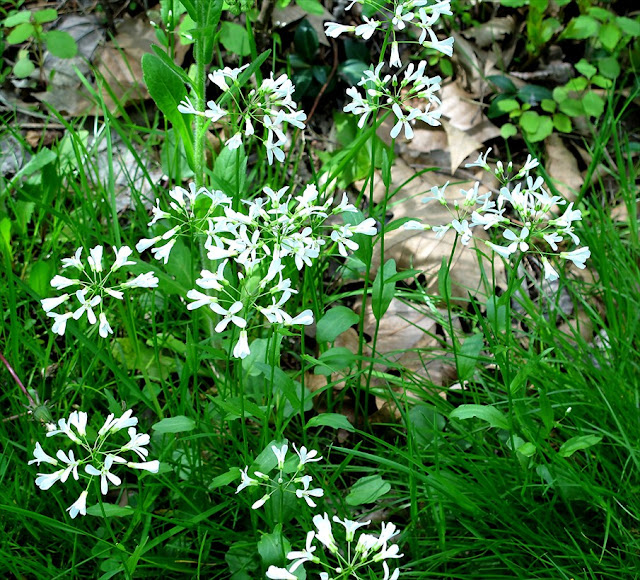 That large plant in the photo above (and larger below) is an Arisaema triphyllum (Jack in the Pulpit), a common wildflower here. It seems to pop up everywhere. 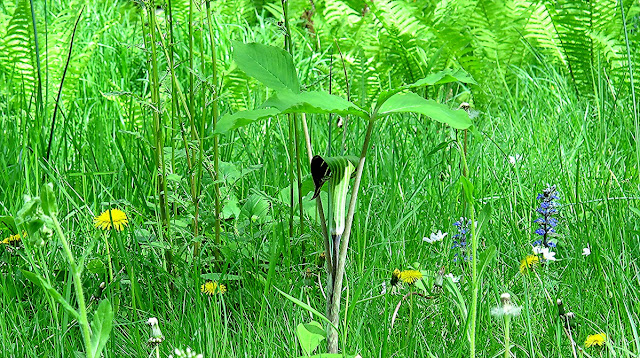 The Galium odoratum (Sweet woodruff) is another legacy plant from the Howeth's. I forms attractive colonies but, considering it has been here for 45 years, it shows no sign of becoming an excessively rampant grower. I added the Pulmonaria 'Samouri' three years ago. It's done so well, I'm adding several new Pulmonarias this year. 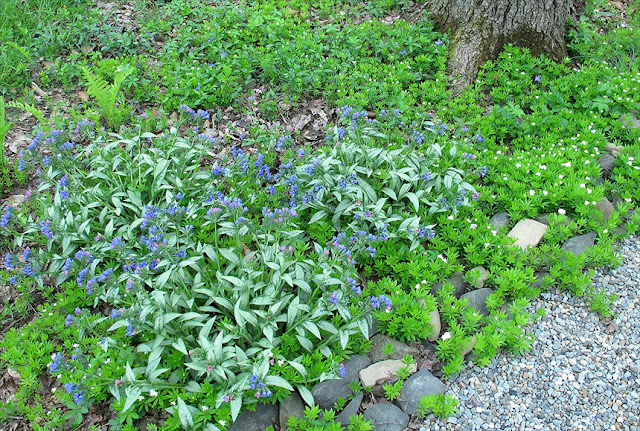 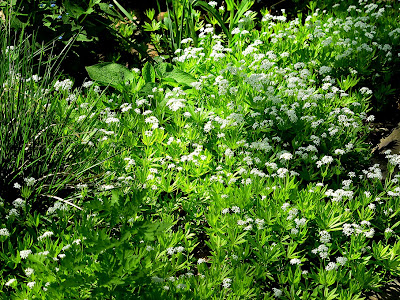 Ferns, too, are a natural for this shady, very moist area. 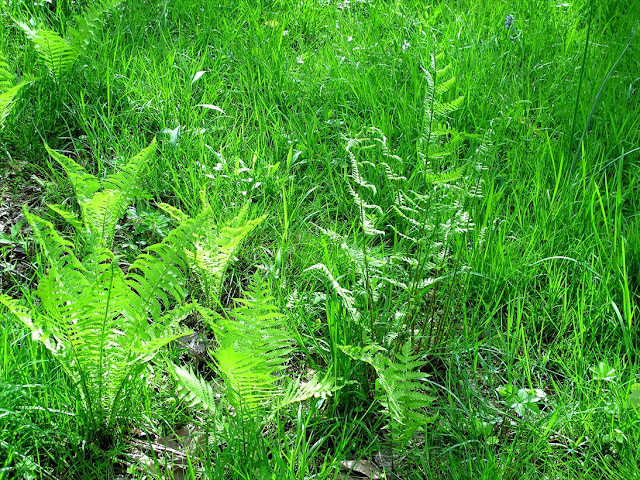 Another view of Ajuga reptans, both blue and white, and a few Tiarella cordifolia. The Ajuga is really only noticeable when in flower in early spring, but the small spires of color are a pleasant addition at this time of year. Here, with Mattuecia struthiopteris. 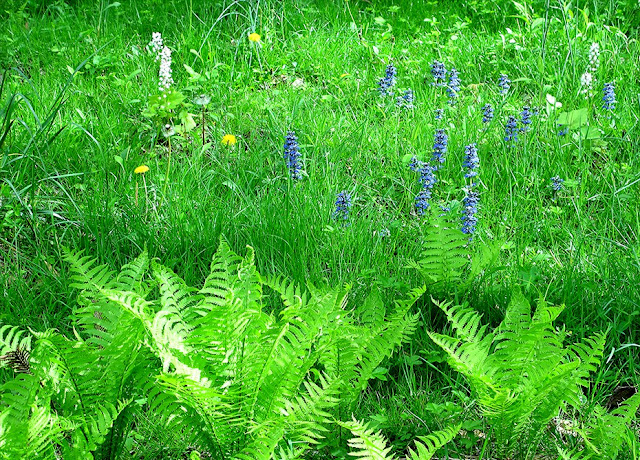 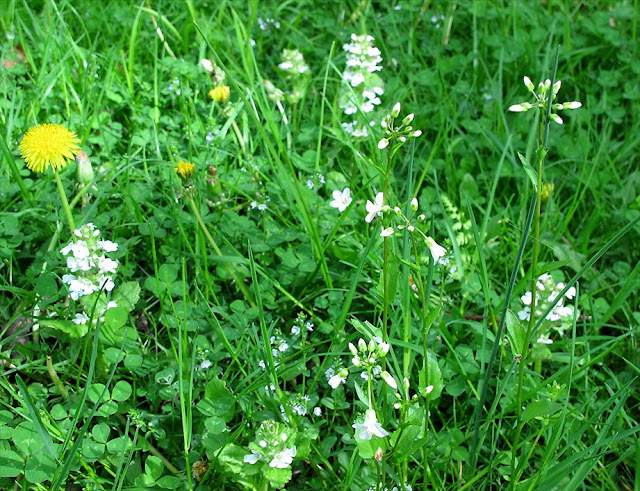 On the other side of the path through the woodland garden, I apply leaf litter every year. This is a much more "natural" area where, to the present, Podophyllum peltatum thrives. I collected seed of the grass Hystrix patula (Bottlebrush grass) from the roadside, and it's successfully growing here now. 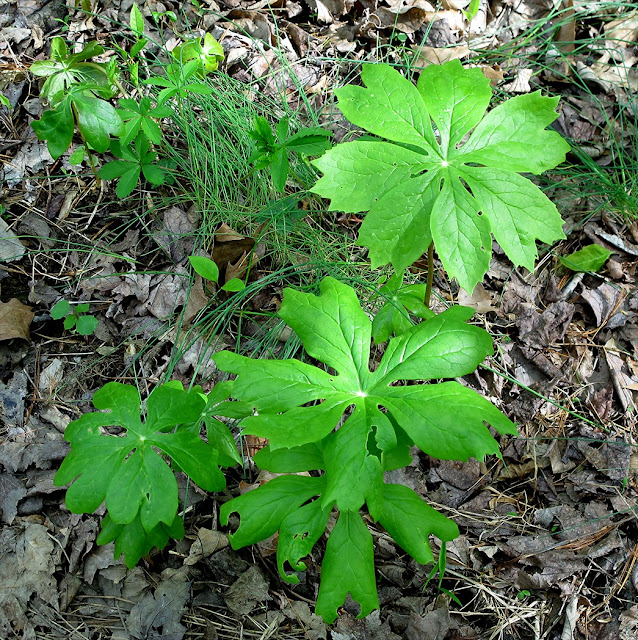 I'm also adding plantings of Helleborus foetidus, Carex appalachica, Epimedium, and Athyrium niponicum 'Pictum' to try to achieve a tapestry groundcover I saw several years ago in a woodland garden across the river in Bucks County, Pennsylvania.

Of course, this area needs plants for the summer too. The ethereals pass, but some plants last through the summer. Symphyotrichum cordifolium (known as Aster cordifolium when I planted it) has taken up vigorous residence in the drier areas around tree trunks, and is also seeding about, adding to the late season interest in this area.

Last weekend, I bought ramps from the Union Square Greenmarket in Manhattan. I've seen photos of wild garlic in British gardens. I don't know if our ramp is the same plant, but its foliage looks the same, so I'm giving it a try in the wetter parts of the woodland area. Perhaps it will reward me with white blossoms next summer.

I haven't mentioned bulbs. Daffodils do well here. At the front, near the entrance gate, is an area of several hundred unnamed Daffodils left by Edith Howeth. They're in sore need of dividing, and I hope to get to them this summer, and replant them throughout the garden. Perhaps I'll also add Leucojum aestivum "Gravetye Giant', perhaps Camassia and other bulbs that can adapt to the conditions here.

I suppose I'll mention a major change I still have in mind--building a raised, rocky berm, over near the right hand path, planted with a few sculptural Japanese maples. (I have to credit this idea to Peter Holt, a garden designer in Nova Scotia.) We'll see.

For maintenance, this area will get a selective early summer cut, leaving the plants with late season interest, then a final cut at the end of the summer. It's important to use perennials that can compete with the very vigorous grasses. So far, most of these can do that. Some, like the Ajuga, virtually disappear into the undergrowth for most of the summer, but they retain their strength and are ready to go again come next spring.

This area is the entrance to the garden, so it's really a prelude to the larger wet prairie at the back of the house. 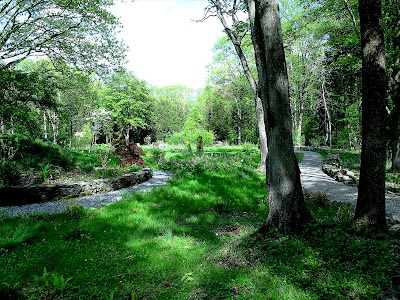