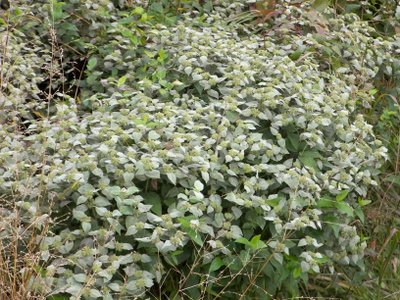 I've seen Pycnanthemum muticum for over two years at Paxson Hill Farm, a small specialty nursery just across the Delaware in Bucks County. It was always swarming with bees and other insects when in bloom, and I was definitely interested. But I never bought it.

Then I saw it for sale on the website of Bluestem Nursery in British Columbia, which advertises it among a selection of perennials called 'Wolfgang's Picks' (Wolfgang Oehme of Oehme and Van Sweden). I did order a substantial number a year-and-a-half ago, but only about three survived the transit. Looking at these now mature plants I can see that the silvered texture of a mass in bloom could be a pretty, and deer-proof, sight.

Michael King's Perennial Garden Design, which I highly recommend for its valuable information on such little known (in the U.S.), innovative planting designers as Heiner Luz of Germany, has two photographs that convinced me I needed to give this extraordinarily aromatic plant a try on a big scale. One photograph is of a large group of mixed pycnantheum and Petasites japonicus, backed by a wall of Miscanthus s. 'Silberfeder', designed by the Oehme and Van Sweden firm. The other was of a mass planting of pycnantheum alone.

At Bowmans Hill Wildflower Preserve, I saw the plant in its natural setting, growing in tight communities in the open grass meadow (the photos above and below were taken at Bowman's Hill).

So I bought all the plants available at Paxson Hill Farm (only six or seven). In August, after Jessie and Brian's wedding, I traveled further upstate (New York) to Loomis Creek Nursery (you may have seen it featured in the lavish British magazine Gardens Illustrated a few months ago), where I had seen several gallon pots of Pycnanthemum muticum earlier in the summer. I bought 20. Later I found 10 more at Bowman's Hill.

They're all planted now, and I'm hoping for a rapid spread across my wet clay this winter. I know I have to wait a couple of years, at least, to get the effect I'm seeking. In addition to visual interest and a neat addition to wildlife habitat, I do hope the odor and taste of this plant will send deer fleeing. (I should know better).

I need about 30 more plants. 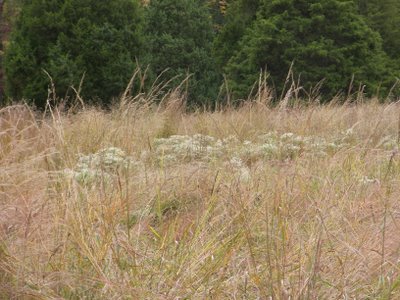