Is planting Dahlia ‘Bishop of Landaff’ an immoral act? 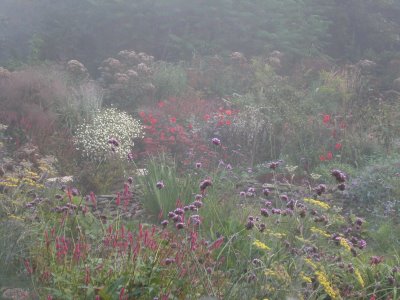 Look closely through the fog; the red blossoms near the center are Bishop of Landaff.

I support use of native plants in gardening. But I can’t find the visual richness and expressiveness I want with native plants alone. In my Rosemont Garden, and in my evolving garden on Federal Twist Road, I’m using both natives and non-natives. Where I live, that’s taking a political stand.

As preface, I want to say I attend the Native Plants in the Landscape Conference at Millersville University every year, I am a member of the Bowman’s Hill Wildflower Preserve near New Hope, Pennsylvania, a member of the Hunterdon Land Trust Alliance, and a supporter of the Plant Stewardship Index (see June 9 posting below). I believe the American nursery industry should not sell plants known to be highly invasive in local habitats, and it should do much more to educate its own staff as well as its customers in the growth habits and needs of plants.

The native plant movement has accomplished important work — conserving local species, preserving remnants of vanishing habitats, creating awareness of the need to protect threatened natural resources, and educating people about their natural plant heritage. And by insisting on the importance of using plants appropriate to the environment, rather than trying to alter soil and other conditions to grow plants not naturally suited to a given site, the movement has had a pervasive influence on gardening.

The New Perennial Movement — as practiced by Wolfgang Oehme and James Van Sweden in the U.S. and Piet Oudolf, Noel Kingsbury, Henk Gerritsen and many other European and American garden designers too numerous to mention — grew out of a long European tradition. Designers have been riffing on the concept of naturalistic gardening for more than a century, perhaps starting with William Robinson in the 19th century, and probably going back much further. The Germans, in particular, have done very important theoretical and practical work matching plants to habitats and testing their behavior under controlled growing conditions over many decades. This movement toward ecologically appropriate gardening has paralleled the native plant movement, and helped set the trajectory of 21st century gardening (at least for a time). For now, native is good. Constructing a drainage system and replacing your soil so you can grow bearded iris and lavender in a wetland is bad.

But in the face of this success, many native purists appear to be boxing the movement into a dead end. (For more on this subject, read Michael Pollan’s Second Nature, and "The aliens have landed! What are the justifications for 'native only' policies in landscape plantings" by A.E. Kendle and J.E. Rose of Reading University, published in Landscape and Urban Planning 47 (2000).)

By most definitions, a plant is native only if it arrived in its environment without human intervention — on the wind, in bird poop, or in some other way not involving human intervention. In North America, many native plant enthusiasts accept only those plants that preceded the arrival of white Europeans. In the UK, which was pretty much wiped clean of all its native species during the last Ice Age, the Channel delayed the return of many plants that were previously native. Because humans accelerated that process of return in the UK, bringing back plants that had survived the Ice Age in the more favorable environment of the Continent, previously native plants are now defined as non-native invaders. They would have returned by “natural” means, but they didn’t arrive in time.

Now that the earth’s population has reached over 6 billion, it is very difficult to attribute the arrival of a new species in any environment to "natural" causes. Human influence is simply too pervasive. This is a bad situation because it means all the native plants that will ever exist, exist now. The time and geographic doors have been shut. No new plants will be admitted to the native plant lists (at least in the most conservative circles).

Why is this a bad thing? Because the climate is changing, and human culture is changing natural ecosystems, constantly, in huge ways. So the number of native species will necessarily decrease over time, as species after species succumbs to an altered environment. Regardless of current preservation efforts, only a minute fraction of the earth’s land area will actually be preserved in so-called pristine condition.

What is wrong with this picture? Have we defined native plants in a way that will result in extinction of most native species unless we create isolated “plant zoos”? Are we moving toward preservation of native species only in highly artificial preservation environments, on pieces of landscape preserved from human development? But even preserved areas are subject to changing climate.

Perhaps our definitions are wrong. Perhaps the human race is a part of nature after all, and we make a huge mistake to see nature and humankind in eternal opposition. In fact, the landscape the first Europeans found on arrival in North America was not pristine nature, untouched by human activity. Native Americans had been managing the landscape for centuries, and the landscape that was first viewed by European eyes was, in fact, a managed landscape. It just looked different from the one they left on the other side of the Atlantic. The endless prairies in the American Midwest are a notable example. The prairies remained prairies only because fire burned them and buffalo grazed them. The native Americans saw the natural result of fires started by lightening, and started setting fires themselves to revitalize the land for grazing and to prevent growth of trees, which would have turned the prairies into forest within a generation. There are many who now argue that the very idea of a natural environment untouched by human culture is a fiction.

Much of the impetus of the native plant movement stems from fear of the effects of invasive species, many from far away places. But many plants of foreign origin thrive in our environment without becoming a problem — while some natives are quite invasive. The Ohio Department of Natural Resources asks: "Are all exotic plants invasive? No, most non-native plants are not invasive in natural areas. Of the more than 700 non-native plants in Ohio, fewer than 100 are known to truly 'invade' their natural settings." (Ohio DNR link)

Some studies have even demonstrated that exotic species can enrich habitats, adding new genetic material when local plant populations become weakened by inbreeding, and providing useful habitat for a variety of insect life. Not to mention their aesthetic value.

The answer, of course, is knowledge of a plant’s growth habits in different environments, knowledge we have far too little access to.

The United States National Arboretum does not equate non-natives with invasiveness. "In many cases, plants from other parts of the world are welcomed, manageable additions to our gardens. In the worst cases," it adds, "invasive plants like mile-a-minute, purple loosestrife, and kudzu ruthlessly choke out other plant life. Ultimately, invasive plants alter habitats and reduce biodiversity." But the Arboretum does not make the error of equating non-native with invasive. (National Arboretum link)

As climate change continues — and we know it will — after all, we are only in a temporary warm spell between periodic glaciations — what is native or not may come to have less meaning. Better to know what will thrive in the changing environment and creatively adapt to coming changes. I admit there are serious problems with some non-natives. The preserved woodlands surrounding my house are dotted with Berberis, Euonymus alata, and Rosa multiflora. But the threat from these non-native species is very small compared to that of our prolific native deer population, which is the source of the greatest destruction of native flora.

I don’t mean to diminish the importance of preserving native species and local genotypes. We need to do everything we can to preserve the genetic diversity of our biota. Preserving native plant populations, and renewing them, is a part of that. But moving plants from threatened environments to other areas where they will thrive is another part of that story. In some cases, that may mean moving a species across an ocean as climate and growing conditions change in a plant’s native range. Consider the Franklinia alatamaha. If Bartram hadn't collected it and propogated it in his garden in Philadelphia, it would be extinct now.

If we see human ecology as a part of the world’s ecology, for better or for worse, we are in a better position scientifically to manage change. The potential for harm is great, great enough to inspire fear of some terrible consequence of human action. But it does no good to deny the part humans play in nature, and to abandon hope for responsible action. Simply defining nature to exclude the human race is not an answer we can desire. That’s a wish for return to some pre-human paradise.

Last summer I attended an all day workshop on identification of native grasses and carex. As we walked the Bowman’s Hill Wildflower Preserve identifying plants, one woman kept asking, “Is it good, or is it bad?” (Meaning is it of native or non-native origin?) Her question points to how value driven the native plant movement has become. And some ardent adherents believe with an almost religious fervor. I exaggerate, maybe, but in many cases, belief has replaced scientific inquiry.

So was planting Dahlia ‘Bishop of Landaff’ in my country garden in Rosemont a churlish or an immoral act? I don’t think so. 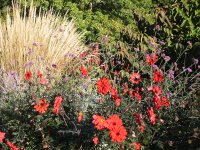