Fountains of light, abstract patterns, taking a chance on chance

I took these photos just before we learned Hurricane Sandy was headed our way. Since we weathered the storm on high ground in Brooklyn, I have no idea whether the garden was knocked flat or blown into a frenzy of exoticism. These may be the last images of the year--but probably not. I'll know when I can find enough gasoline to make my way out to Federal Twist. 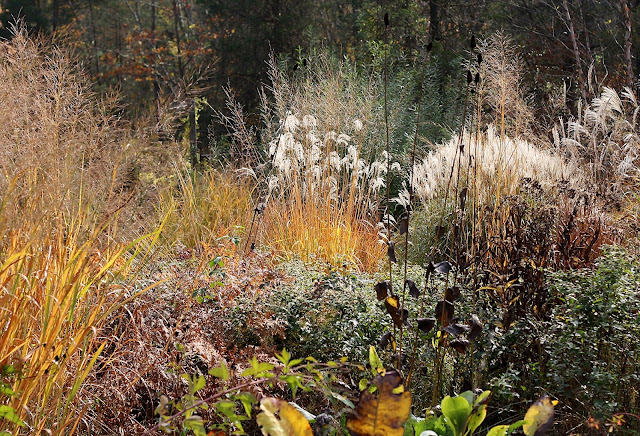 ... exposing structures of the garden perennials and the bare branches of the forest trees beyond. With good light a kind of contrapuntal patterning, a visual music, begins. This is present through all seasons, but reaches its peak in fall.

This is the dry end of the garden where tall perennials and grasses--Panicums, Molenia, Miscanthus, Rudbeckia maxima--tower above the shorter perennials--glaucous blue Pyncatheum muticum and golden bracken. There are no flowers now, except for drifts of Aster tartaricus not visible here, but who wants flowers with all this color? 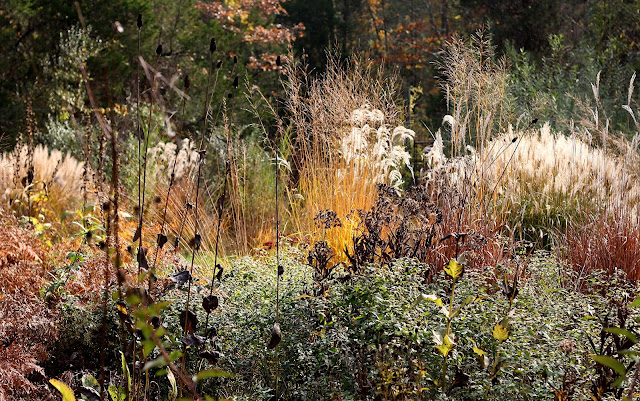 This is an example of horizontal layering--plants dotted throughout the landscape, some tall, some short, some opaque, some transparent--in almost random distribution rather than lined in ranks as in a traditional flower border. 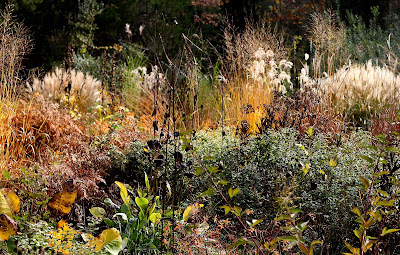 Graveled paths and concrete pavers run around and through this area but they're hidden by the perennial growth. The Wave Hill chairs below give a sense of scale and locate one of the paths. 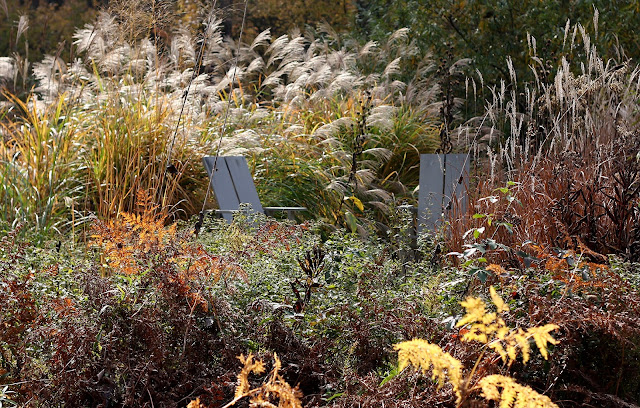 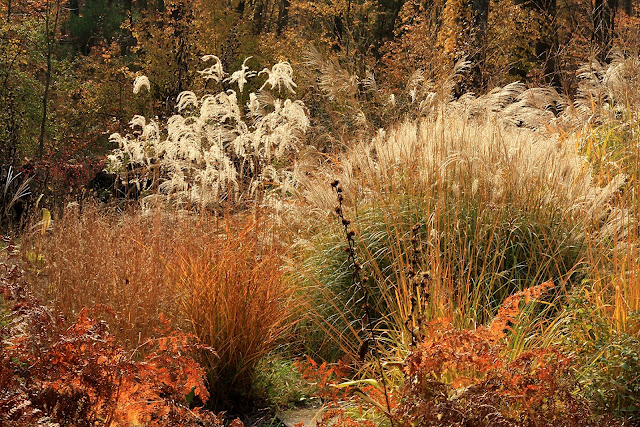 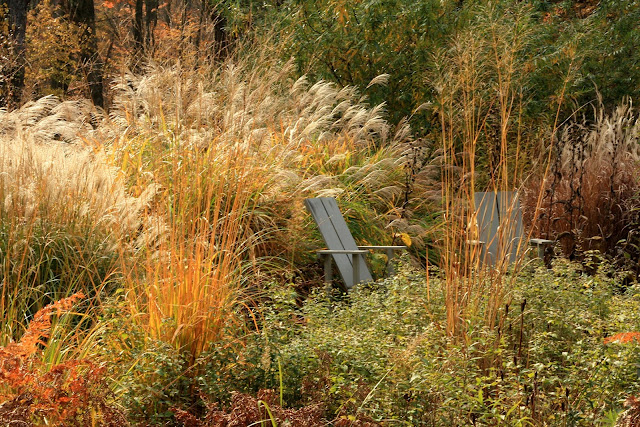 The tallest grass is Miscanthus giganteus below, at about fifteen feet, counting the flowers ... 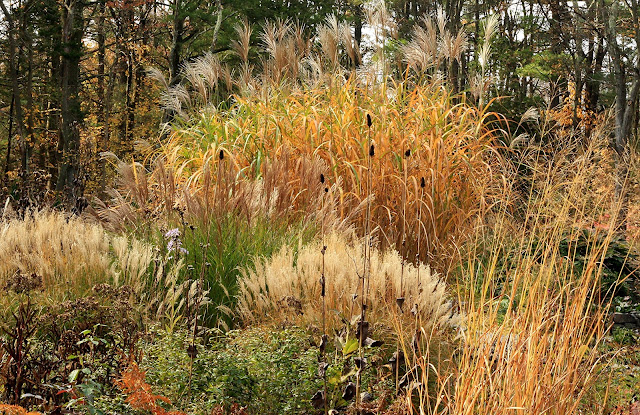 ... which is about the height of the bank going up to the house, mostly hidden behind mounding miscanthus and other perennials. 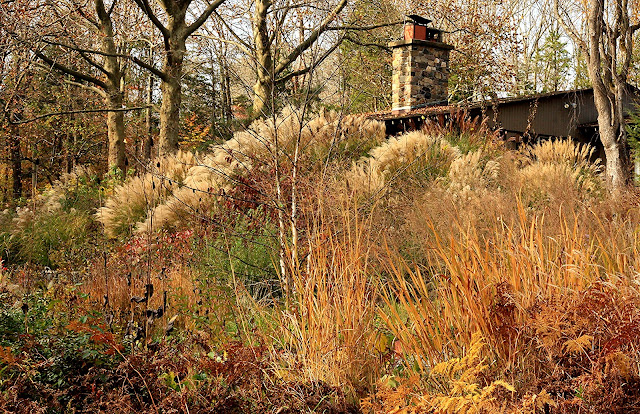 Layering at a smaller scale--whisps of golden bracken and miscanthus flowers in front of Sedum 'Herbstfreude', backed by a real keeper, a native broom sedge (Andropogon virginicus) that was here before I started the garden. 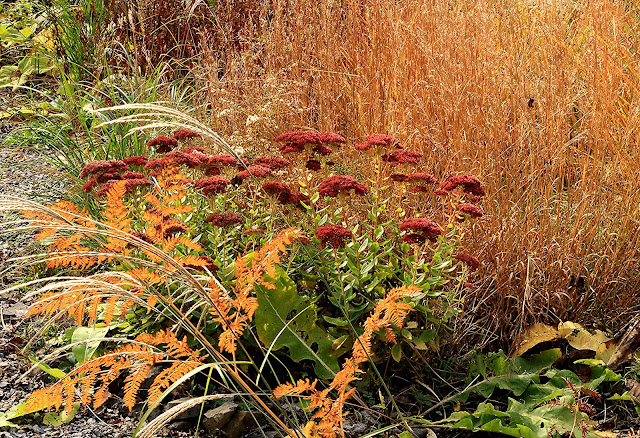 The layering effect can be visually complex, and at times quite flat and two-dimensional, suggesting patterns on paper or textiles. Here a golden leaf of seedling Silphium laciniatum with seed stalks of Rudbeckia maxima. 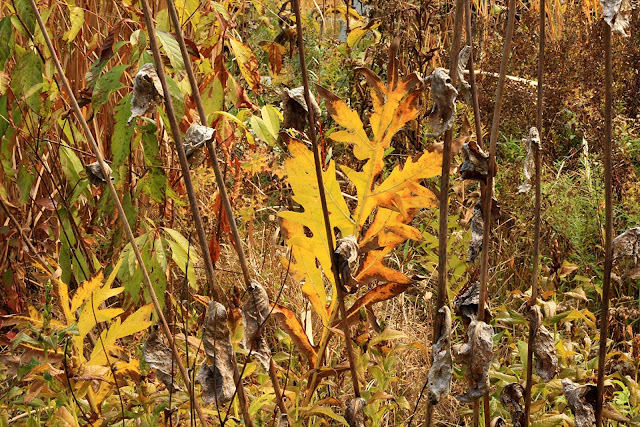 At this time of year, the garden takes on colors of the surrounding forest, though in more concentrated form. Seen from above, the plants make a bowl of abundance, and you can see the colors of the garden and the forest beyond are one. The green wall of trees that acted as a barrier during summer vanishes in areas of deciduous growth, and the garden joins with the open spaces of the forest ... 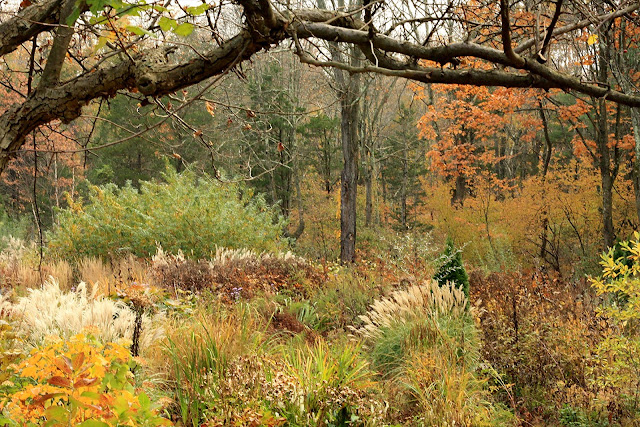 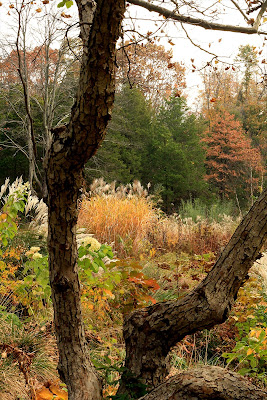 ... to enjoy the patterning, you have to go down into the garden and look out through the layers of planting. Lines, voids, colors and textures make sensuous compositions easily seen during this brief season, creating
graphic, at times abstract, tableaux ... but tableaux that evoke emotional response. I think of tossing currents, heaving waves, sea metaphors to capture the movement, implied and real ... 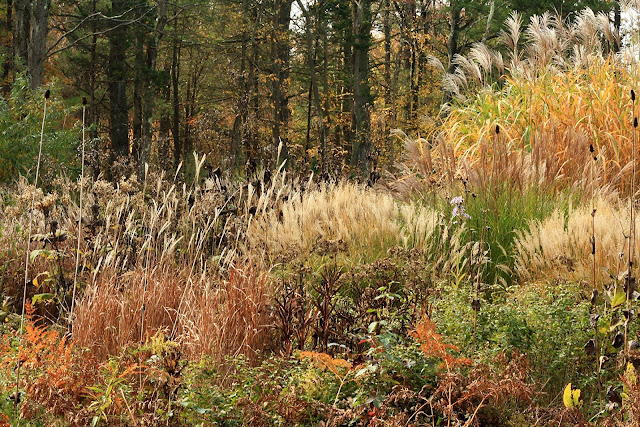 ... and depending on the light and time of day, you may find yourself in a world of magic, nature made unreal, touched by artifice. 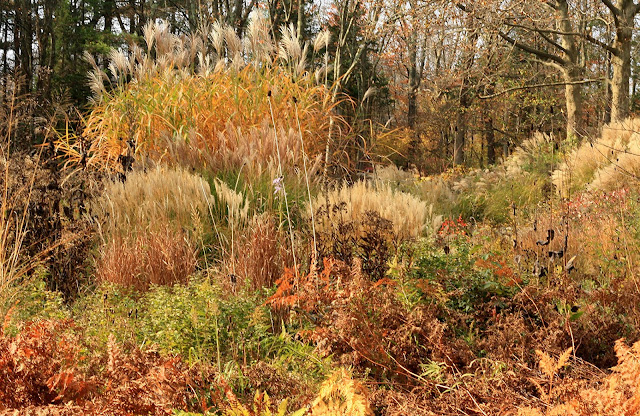 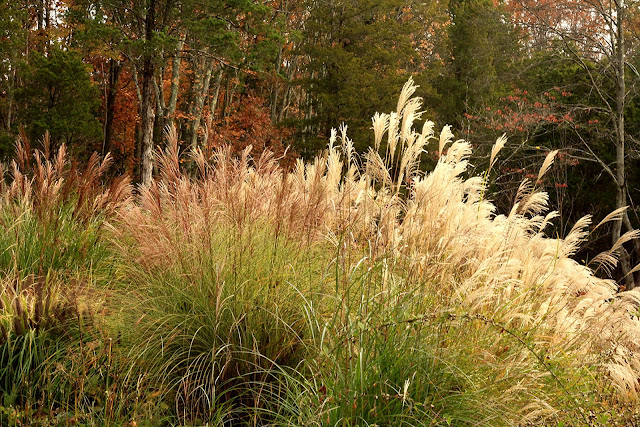 With this kind of naturalistic, "pseudoecological" gardening, combining many different plants in close communities, editing is very important BUT it must be balanced with a willingness to experiment, to "take a chance on chance," to wait and see if an emerging plant or group of plants can work.

Below, for example, the mid-height plant at the front is an easily self-seeding native, Eupatorium perfoliatum (Boneset). I wanted it in the garden, and it appeared on its own about four years ago. Now it's spread, but not so vigorously that I need to bother about it much. In early fall, when there isn't much other color, the off-white umbelliferous  flowers of this plant are a pleasant ornament and they add bright spots of light as darkness comes. I'm glad to give it the run of the place, and can easily pull it out when it appears where I don't want it. 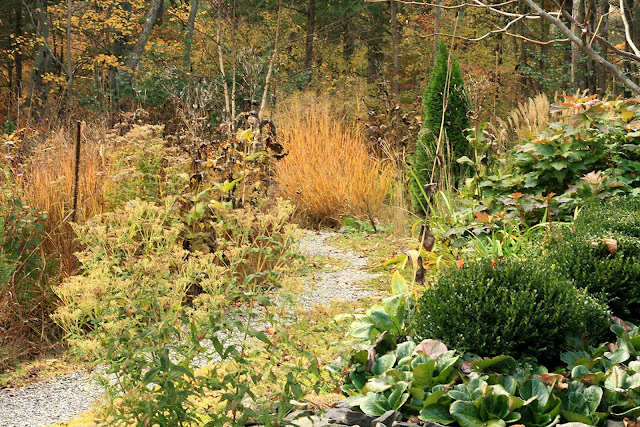 One of the challenges of a naturalistic garden is the potential mess if plant growth isn't carefully edited.  Since this garden needs a feeling of fullness and abundance, most editing is limited to removing self-seeded plants that don't belong in positions nature chooses for them. Only rarely do I  need to clear an area and replant but that does happen.

Here, in this tunnel-like planting of Miscanthus, dry, leaden spires of Inula racemosa 'Sonnerspeer' add a mysterious touch, a somber note, that's an emotional highlight of this moment in the garden. The Inula is self-seeding wildly. I'm sure I'll have to eliminate many seedlings next spring, but it has such an extraordinary structure and presence, I wouldn't be without it. 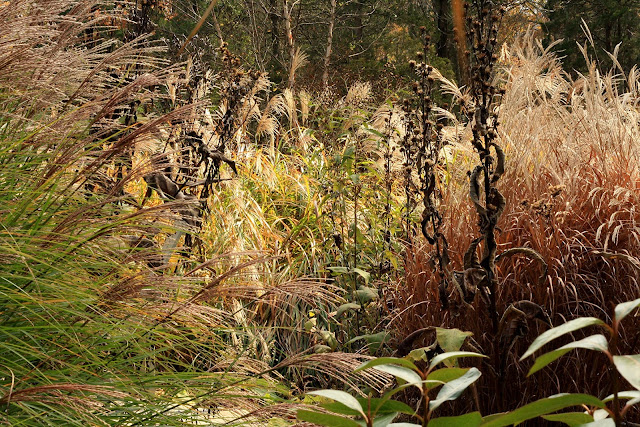 Though modeled on natural environments such as the banded appearance of grasses seen across a wild field, the horizontal layering in the garden is a combination of accident and intentional planning. It's important to accommodate accidents of growth and self-seeding, but also to edit when necessary. From front to back (below), Liatris spicata, Panicum 'Shenandoah', Aster tartaricus, seed stalks of Rudbeckia maxima, Filipendula rubra, Thuja, then the forest trees with their network of limbs jutting this way and that ... 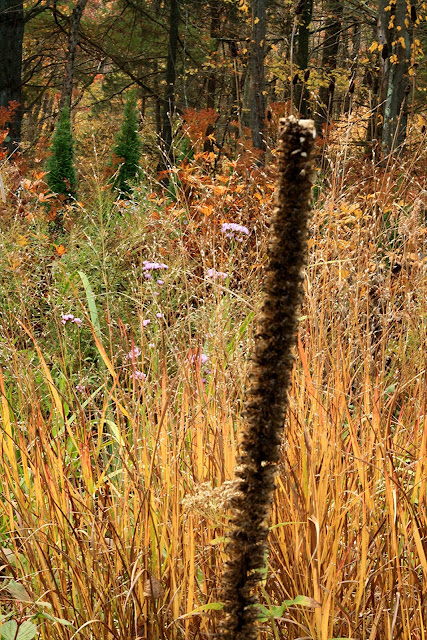 ... all rather precariously balanced between chaos and aesthetic order. An almost Japanese effect. Another person might want to edit this to make it simpler, but I prefer letting the pattern and organization emerge as you analyze the component parts.

The path below adds three-dimensional depth, suggesting a narrative of travel or a story. 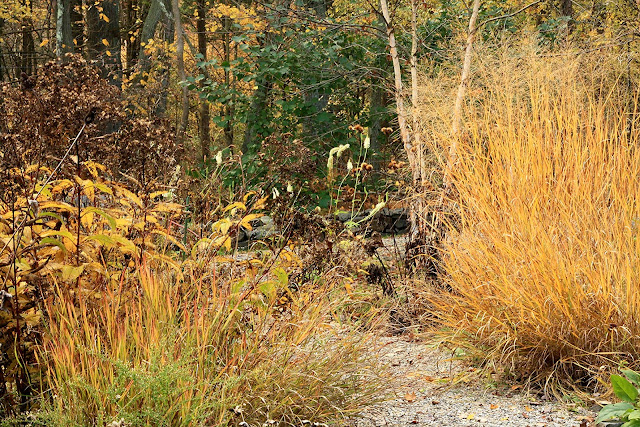 More examples of horizontal layering, some closely cropped from the fabric of the wide view, looking very two dimensional ...

... while the next is clearly three-dimensional, as signaled by the out-of-focus Silphium perfoliatum foliage in the foreground ...


... and again with the focus changed.


Moving back to the scale of garden landscape, the next images show horizontal layering across much larger areas. I think one thing that makes this layering distinctive is the figured ground field created by the forest background--a texture of trunks, limbs, leaves, colors that lends an almost painterly quality and an even greater sense of fullness, particularly at this time of year.


And in the next images, contrasting shadow and light contribute another kind of differentiation. 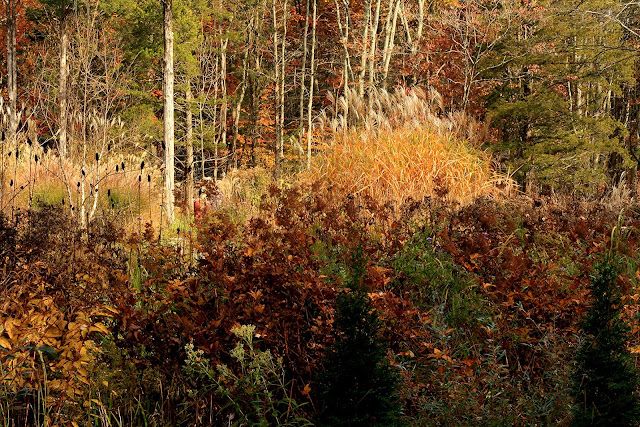 The image below is an especially complex example--Aster tartaricus in the foreground and a stalk of Silphium on the left, then behind from left to right, Panicum 'Dallas Blues' and the leaden brown of Joe Pye Weed, with the orangish foliage of Filipendula behind, then a still green willow (Salix sachalinensis).

Does it hold together? I think I'd put it on a postcard. But it's a picture, not a garden. 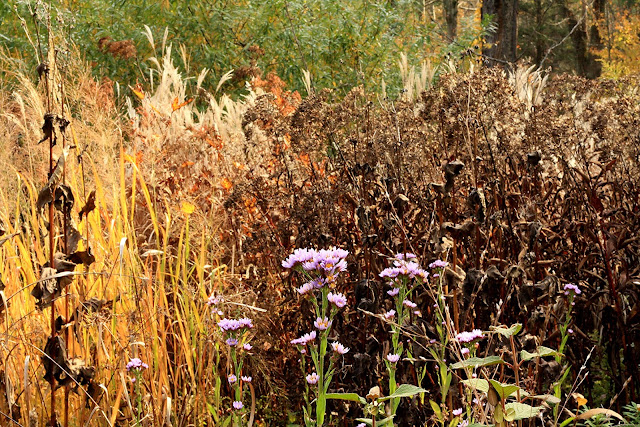 Here the open simplicity of fine grasses in sunlight. 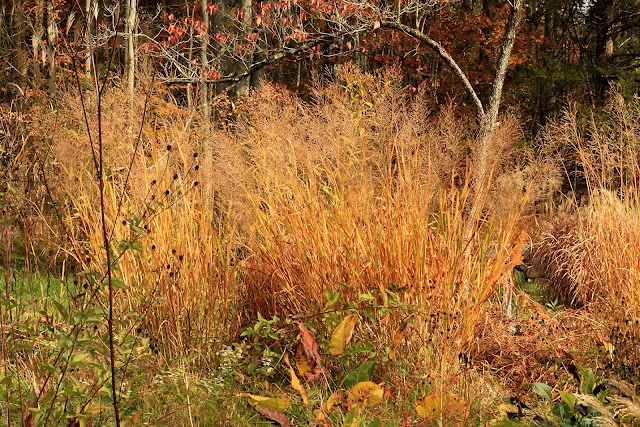 More complex patterns. Perhaps too wild looking for some. 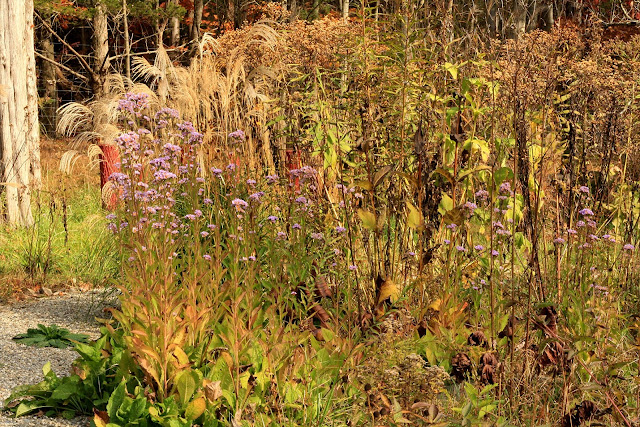 But move in closer and order emerges. 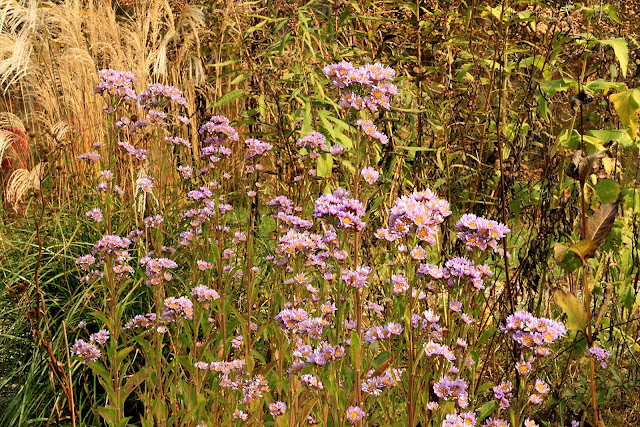 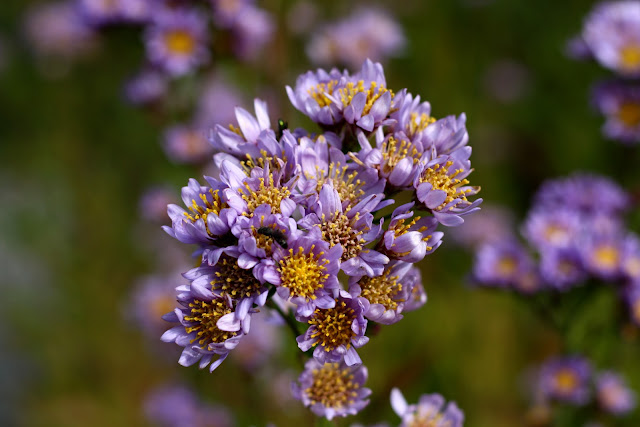 Taking a view from the distance you can't tell where the garden ends and the woods begin. A reminder of how close the forest is, and the garden's transience. In forty years this garden would completely disappear if I didn't burn in spring and edit, edit, edit. 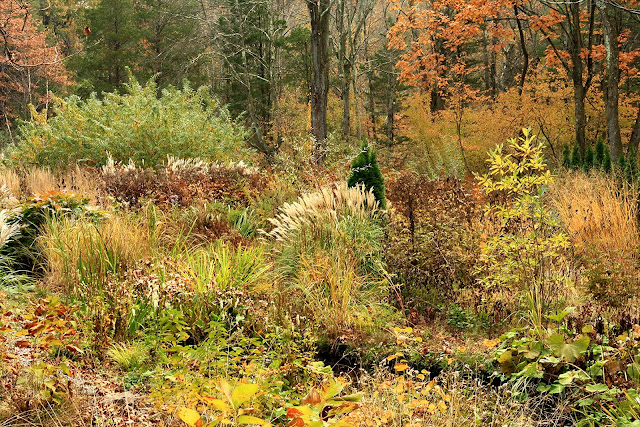 You can find the full photo set at this link (click on Slideshow in the upper right when you reach the link).
Posted by James Golden at 9:47 PM