The garden is taking a direction I hadn't intended. Too much gold and yellow, too many plants, too many things. This post could be categorized under "Too much information" but it's my record of progress on the garden so I publish it with some reluctance.

I know very well the city garden is small and simple, in contrast to my country garden, which is large and complex. I understand this and yet I've tried to install plantings in Brooklyn using the same relatively unfettered freedom I've grown used to in the country. This has been a learning experience, so to speak. Time to undo.

Here is the garden a few days ago. 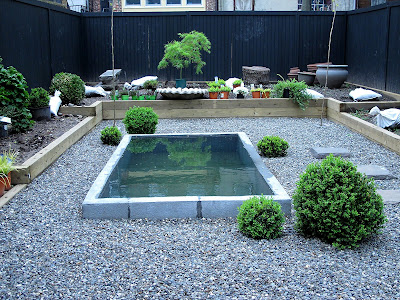 I've made several changes since then. I moved a large tree trunk (from the mulberry that fell in Hurricane Irene last summer) from the back to the graveled area, and I added two pieces of linear argillite near the pool (below). I like the mulberry trunk--had intended to use it as a seat--and the argillite, which suggests waves of moving water, but the garden appears to be getting very crowded. 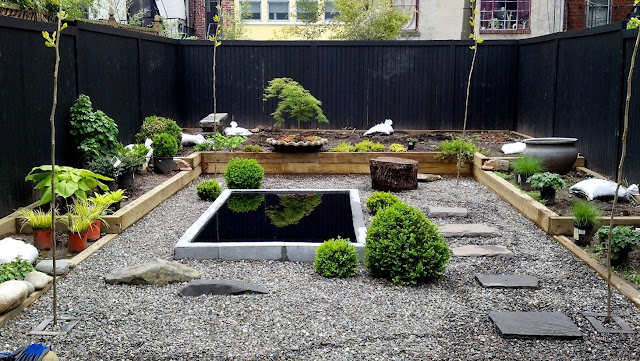 Yesterday I planted the "dry" fountain basin in front of the Japanese maple with several colored sedums. I like that and I think I can keep it if I simplify the other plantings. But the accumulating plants scattered in pots have become a distracting clutter. There are too many things going on.

This garden must be a simple, contemplative space, a garden of tranquility, a sanctuary. It's clear the simplicity of box woods against the restrained gravel field is key to that.

I have no planting plan for the garden, other than the original concept of four Sunburst honey locusts and a diagonal sweep of box woods across the gravel. In fact, that almost seemed to be enough. So I will return to that original concept and move slowly. I'll look around the nurseries this weekend for ground cover plants--euonymous, ajuga, Meehania cordata (have three already), sweet woodruff, Helleborus, ferns, low green things. Additional points of interest can come later if at all.

I may remove the argillite and tree trunk, probably will have too, but that can wait until I see how a simplified planting scheme changes the garden.

One option would be to retain the linear argillite stones, remove the mulberry trunk, possibly using it as a table in the seating area near the house, and replace the broken slate stepping stones with simple concrete rounds; their simpler lines and material would complement the concrete pool, reducing the visual complexity. 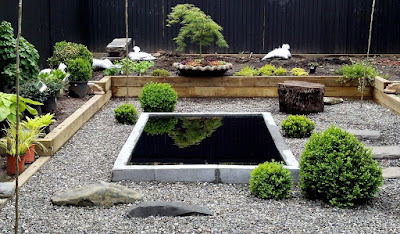 I want to get back to the spirit of this spare, open design. 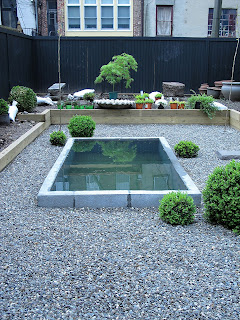