Ah, the changes that come with age...

It's a subject that should be of interest to everyone since we all will grow old some day. I admit it's a subject I'd rather not think about, but living in the country where a visit to the grocery means a 20-mile round trip in the car makes city living seem a prudent alternative. We're fortunate to have both, and to be able to adapt to future conditions as necessary, having both a country house on Federal Twist Road and a city house in Brooklyn.

We're also thinking we should maximize rental income on our Brooklyn house as we move into retirement, so have made plans to enlarge the garden apartment and move there (probably a wise option if the "Tea Party" types manage to wreck the American economy.)

What this introduces into my life is a new city garden.

The new room we're adding, shown on the left in the plan below, will have twelve feet of glass windows and doors looking out onto what is now a derelict back yard. Thus, the need for a new garden--something to look at, for a start, and a real garden where I can do what is done in gardens. It will certainly be very different from the country garden at Federal Twist.

This is the view out back today. The tree is a Mulberry that, fortunately, never fruits. An arborist we had look at it about ten years back speculated that it might be one of the largest Mulberries on the eastern coast of the US. It's probably 80 feet tall and I'm guessing it may have been growing here when our house was built over 140 years ago. 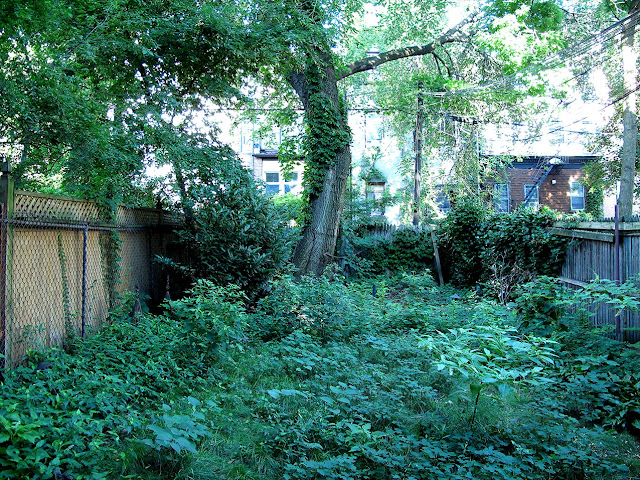 Someday it will have to be removed. Can you imagine the cost of cutting up this monster and moving it out through the house?

So we'll have a shade garden. I've sprayed the plant growth with a glyphosate herbicide in an attempt to clear the ground. I'm not too worried about that right now because building the new foundation and adding a room will be terribly destructive. We'll have to wait for construction to end, let the air clear, and see what we're left with.

We certainly will need an attractive, new fence. And a plan for the garden. I'm thinking about gravel paving with clustered bluestone. We have over 200 square feet of it, some of which you can see sinking into the ground below. Until recently, this was a tenant's garden. He kept it up rather well. but once he lost interest, it quickly became overgrown and reverted to the mess you see now. 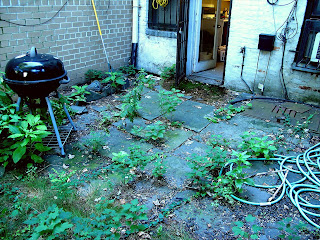 The back of the house is not attractive, but imagine a 16-foot-deep room added at ground level, new surfaces, new colors. The addition will leave a 20- by 40-foot garden space. Small understory trees will be essential for privacy. And I'm thinking about using bamboo on the right side to screen a neighboring house with four stories of terraces  ... probably clumping bamboo ... but perhaps a beautiful, tall running bamboo, if I can bare the expense of a liner to contain it. (I need a bamboo expert. Know one?)

The back wall of the existing house and new extension will have to be painted in colors complementary to the garden to be. Something warm, not this cold, bluish-grey. 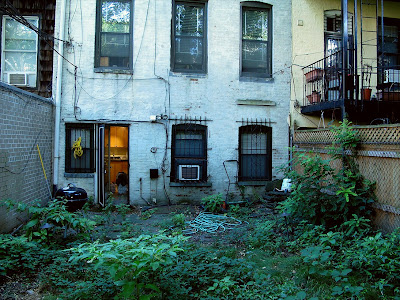 The neighbor on the right (the house with overlooking terraces) has many trees, casting our plot into shade. That, added to the high canopy of the massive Mulberry, makes it impossible to think about any but an all shade garden.

I've been mulling over what to do for the last few months. This is my initial sketch. It may, or may not, become a reality. I really have to evaluate the space remaining after the construction ends, probably in November. But here is food for thought. I'm also considering hiring a professional for some "coaching" and to do phased, finished plans. 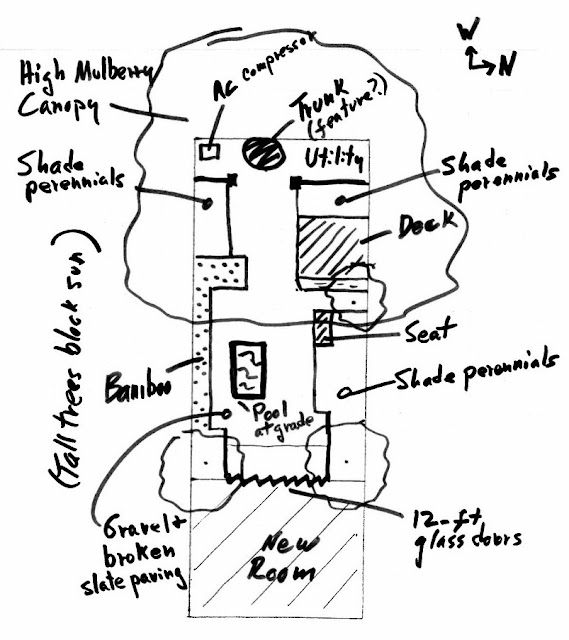 I recently read Dan Pearson's Home Ground: Sanctuary in the City. Though I'm in no way trying to imitate Dan's former Peckham garden in London, his book has been present in my mind as I think about my own urban garden and what I want from it. On first thought, for example, I might have made a sitting area close to the house. But I remembered Dan's writing about how important it had been for him to make a decked area out in the garden, away from the house, to pull people out into the garden, and make a setting where they could enjoy being "in" the garden, not at its edge. So I've used a deck for a sitting out area, toward the back of the garden. It would be surrounded by large-leaved plants that give visual interest, interesting scale, and a sense of shelter.

Though it gets lost in the bus-y-ness of the sketch, the small rectangular pool will be the heart of the garden. I'm imagining a still, tranquil, reflective surface, at grade, with no fountain or flowing water. An edging of bluestone, the historically appropriate material for brownstone Brooklyn. Frogs, or perhaps goldfish, will control mosquitoes.

I'm also thinking about plants, just to get the juices flowing. Decisions will come later. Here is the rapidly morphing, rather random, list:

Perhaps a shady spot for rocks and a small moss garden ...

(Just possibilities ... do you have others to suggest?)

It will be an intimate space. Nothing like this. 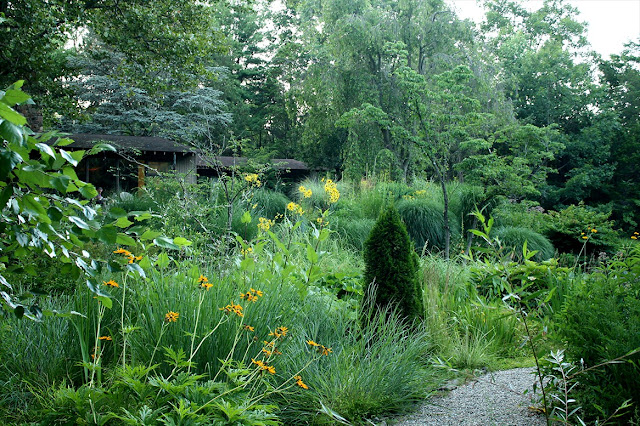