High summer and ample rain have given me a garden almost profligate. The large prairie plants have grown even taller than in past years and spread by self-seeding into new areas. The invertebrates, the insects, appear to be thriving, usually more apparent by the sounds they make than their visibility, with healthy populations in good balance. That I had no problem with Japanese Beetles this year, only a few, I attribute to a diverse invertebrate community in equilibrium.


The tall yellows continue and now they've been joined by the mauves--broad masses of Joe Pye Weed (Eupatoriadelphus maculatus), intense and transient deep violet of Iron Weed (Vernonia), somewhere in between a few Prairie Blazing Star (Liatris pycnostachya), which survive only in propitious locations, not being as successfully competitive as some of their neighbors; even my only Angelica gigas, a dark, burnished, purple-almost-brown. As these colors fade through August, the grasses have just begun to put on their late summer fireworks. 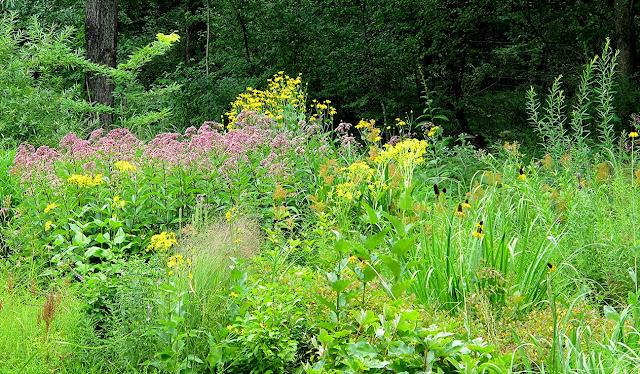 I've linked a short video of the garden to this photo. Take a look (click on the photo above), and you'll see a panning shot across the garden from the raised position of the house. This gives a good overview, but it really misrepresents the garden, which looks entirely different when you walk down into it. Looking at the video, you'd have no idea a network of rather wide gravel paths, and other smaller paths, run through the plantings. You see much more of the intricate detail only by walking through, and the rest of this post will take you on that walk. 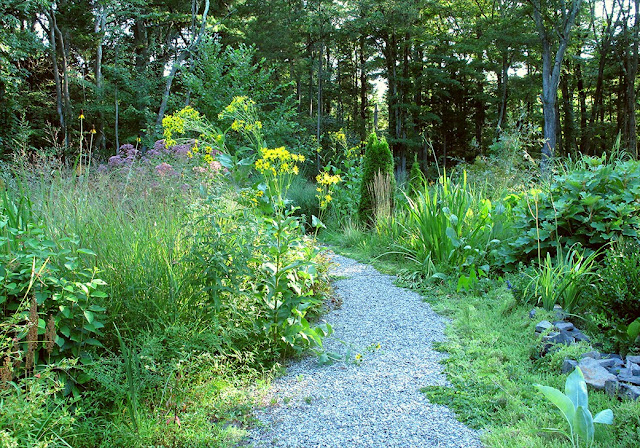 Here are several views of the main path across the garden showing the plantings beginning to overflow the edges, a desirable state of affairs to my thinking. 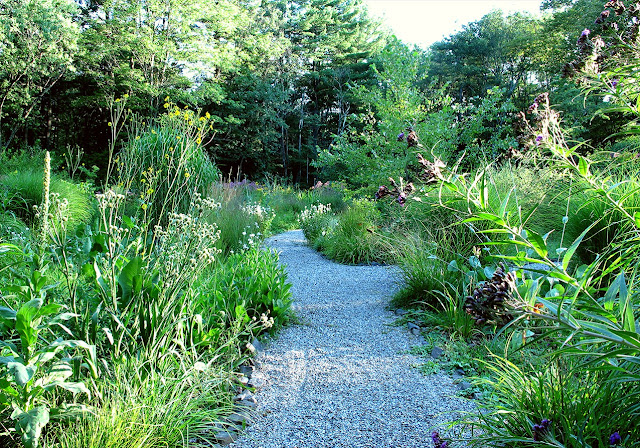 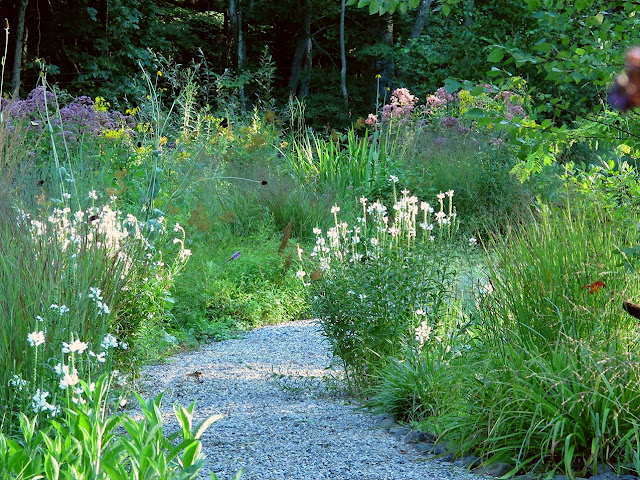 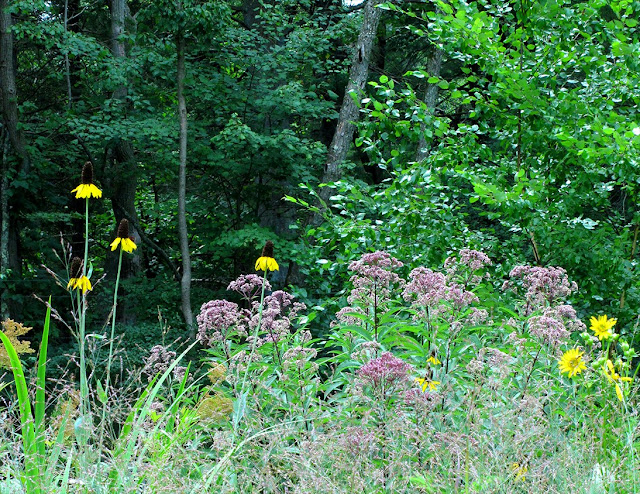 This isn't planned color, and I make no excuses for it. My interest is line, mass, form, movement, visual tone in the sense of emotion more than color. Above, the tall Rudbeckia maxima on the left, fluffy aging flower heads of Queen of the Prairie (Filipendula rubra) below it contrasting with the sword-like leaves of the early spring Iris pseudocorus, then a bunch of Joe Pye Weed, which really is much more colorful than this photo shows, and Cup plant (Silphium perfoliatum) on the right, all softened by the gauzy screen of flowering Switch grass (Panicum virgatum 'Shenandoah'). 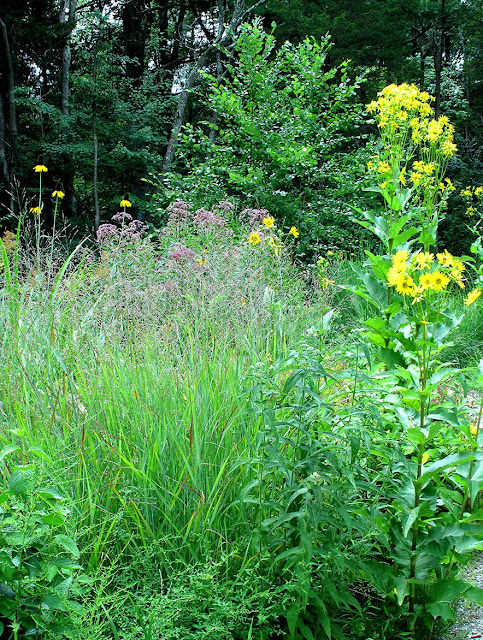 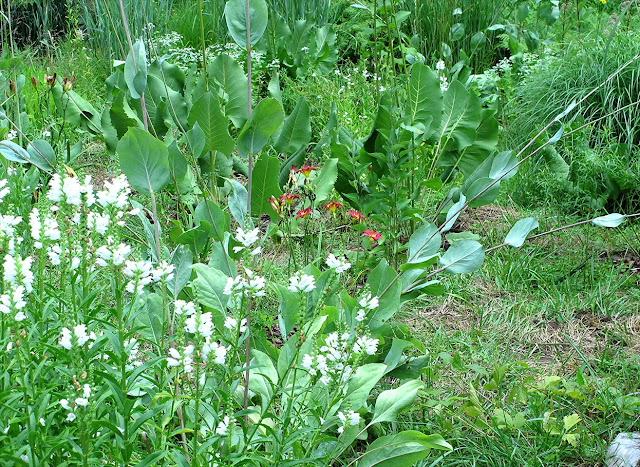 I want masses of white Obedient Plant (Physostegia virginica 'Miss Manners', above) and have more growing on for planting after the weather cools. My goal is to treat the Pycnantheum and Physostegia as a groundcover, and spike it here and there with red to orange Daylilies (Hemerocallis). I suppose I'm more a creature of fashion than I'd like to think, and have unconsciously absorbed a liking for hot colors--though it's not just a matter of fashion; in my intensely green garden, the spots of brilliant color add a pleasing depth and complexity, passion smoldering in dark recesses. 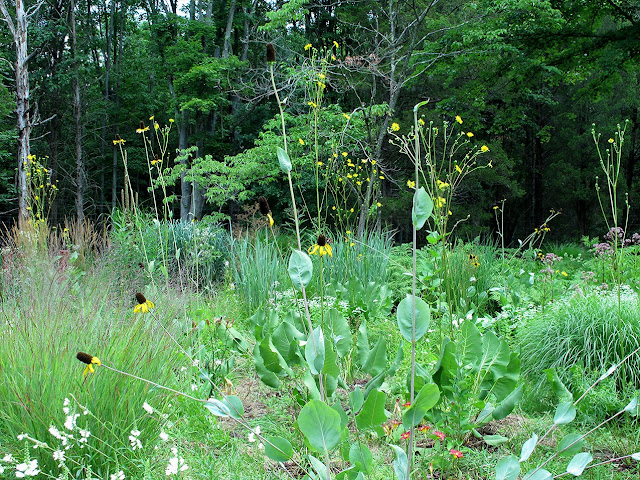 You might think they would clash with the very different color scheme of the garden as a whole but, because their blossoms tend to occur in isolated spots, and are highly transient, they don't. Hemerocallis also seem to do well in a highly competitive garden environment, and the other plants hide their tattered, unattractive foliage after the blossoms pass. 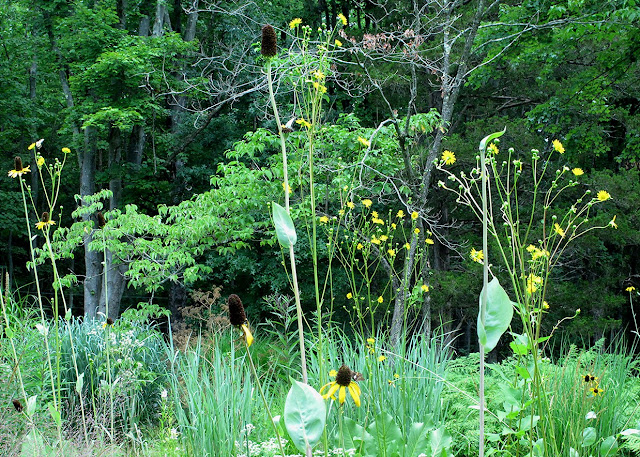 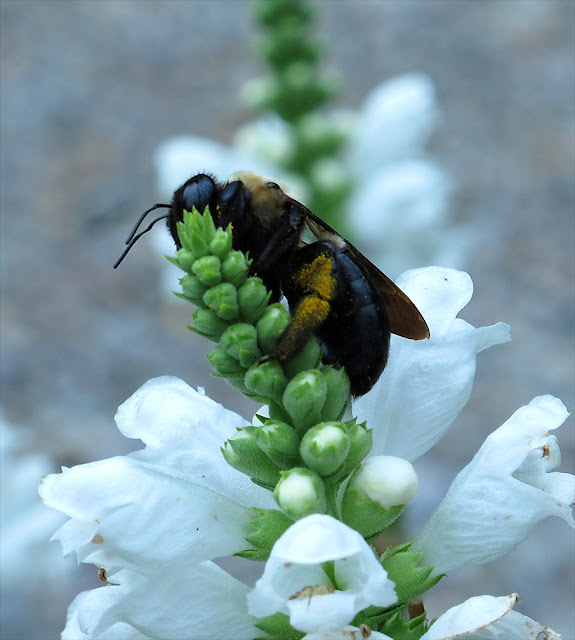 On to the sound part of this post's title ...  All these plants attract hordes of insects, and their movements and sounds are entertaining and stimulating, sensuously and intellectually. At this time of year, these "incidental" insect performances happen against the constant roar of cicadas emanating from the wall of woods surrounding the garden. The sounds come in rhythmic waves, as the insects answer one another. And the night sounds, of course, choruses of frogs serenading. 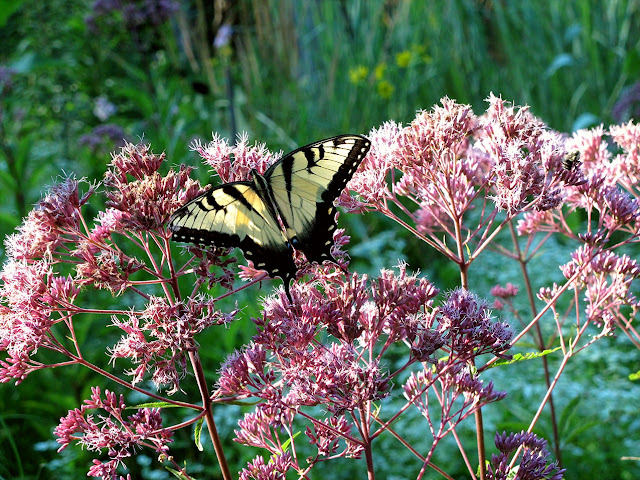 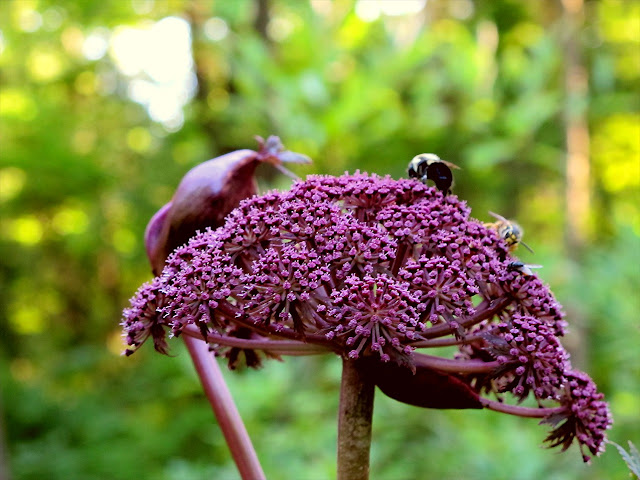 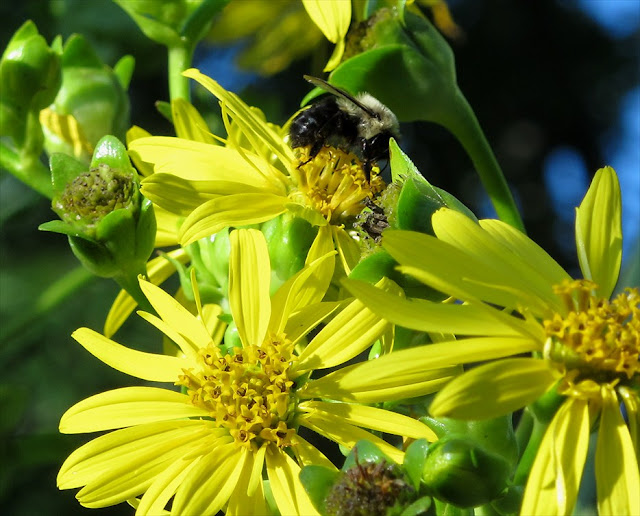 The audible landscape is like a separate world ... one I can't understand at all but perhaps understanding isn't necessary. You can just give yourself over to the sound, "rest" in it like a giant sonic cushion of vibrant air. 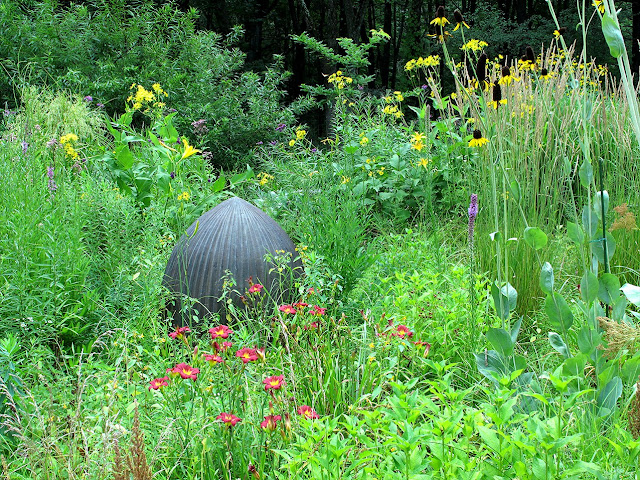 About eight feet off the main path Marc Rosenquist's sculpture, though not mauve or purple, certainly associates easily with those colors. These daylilies are the last to bloom of about fifteen planted throughout the middle of the garden. You see them from one angle and ... 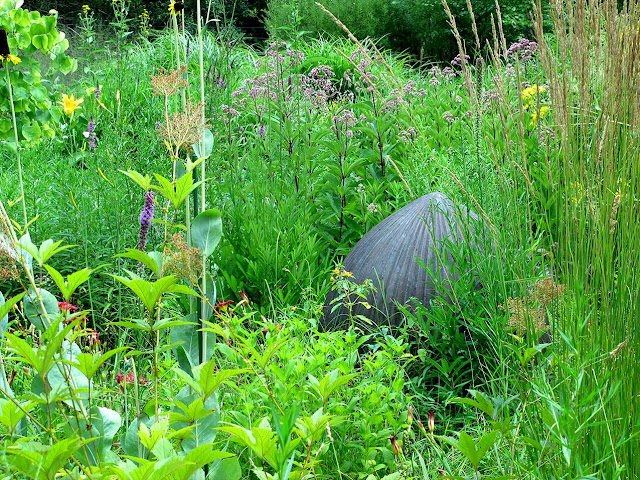 ... from another you don't. Again, a demonstration of the need to walk around to see the plants from various points of view. 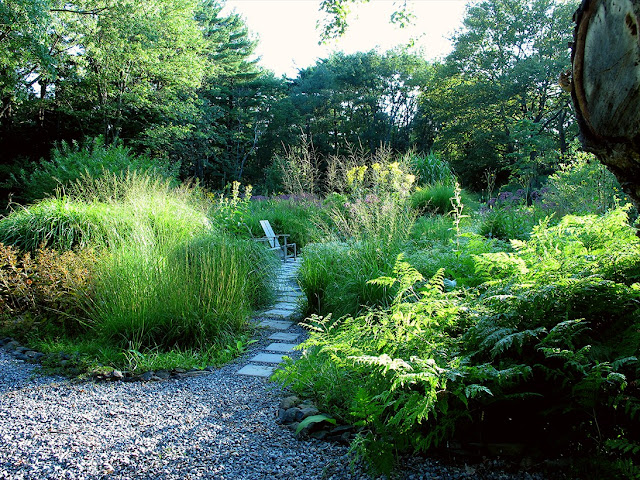 The pathway across the middle of the garden. Another way to get up close to the plants. I'm adding yet another, less obvious path branching off from the left of this area to make it possible to get deep within the plantings. 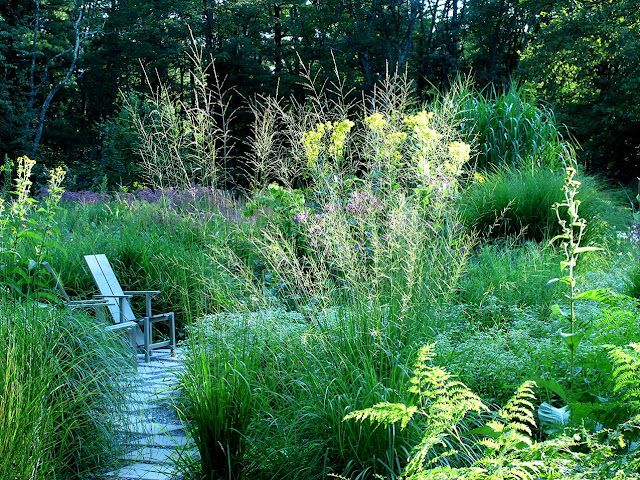 A European grass, Molinia caerulea 'Skyracer', with tall, delicate flower stalks, crowds the entrance path, so close it touches you, but so light and airy you don't mind a little crowding (well, some do). 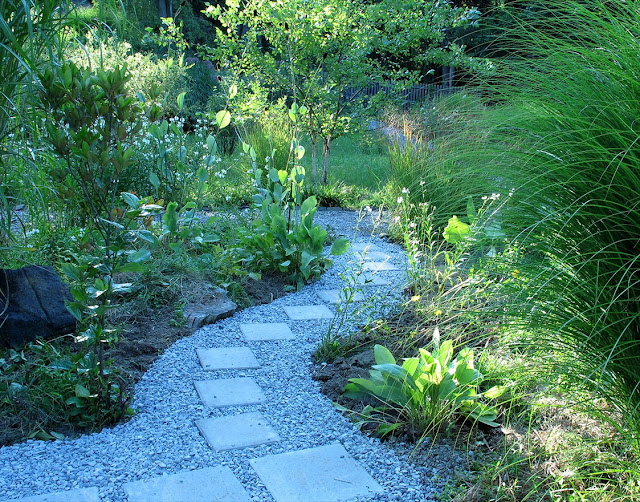 Last weekend we added this small new entry path on the opposite side near the house. We put it in by violent means, just digging across trying avoid established plants. I don't really like it; it's too neat and tidy. The edges need to be muddied and planted, and some larger plants will have to be moved next spring. Then, perhaps it will look a part of the garden. 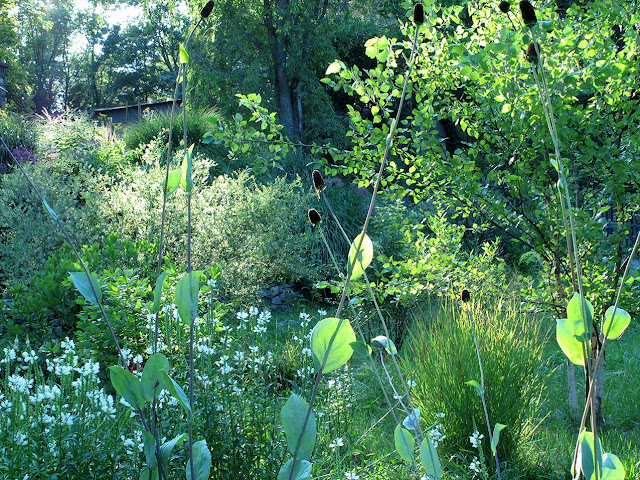 This is the view up toward the house from the new small path ... 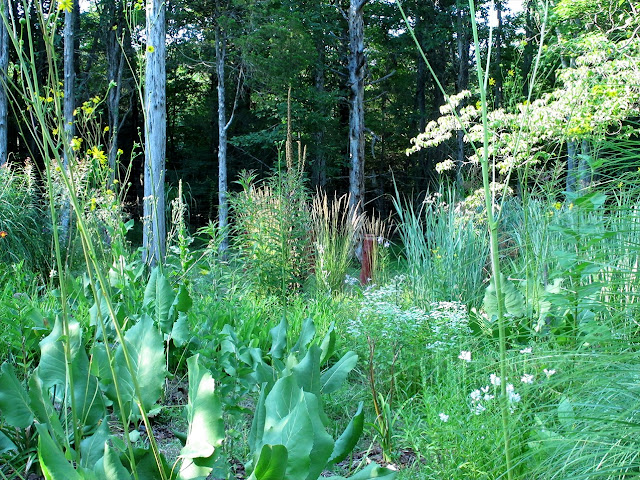