Phil and I first saw Marc Rosenquist's sculptures in his and Gail's garden a couple of months back and we immediately liked them. Gail said we should have one in our garden, so we went to look two weeks ago. It's in the picture below, though you can't see it, slightly to the left of center, at a focal point where the paths meet, a center of energy in the garden. (I'll tell the story of how it got to that spot in the garden in the future, when Gail sends the images of Mark and me maneuvering it into place, ... 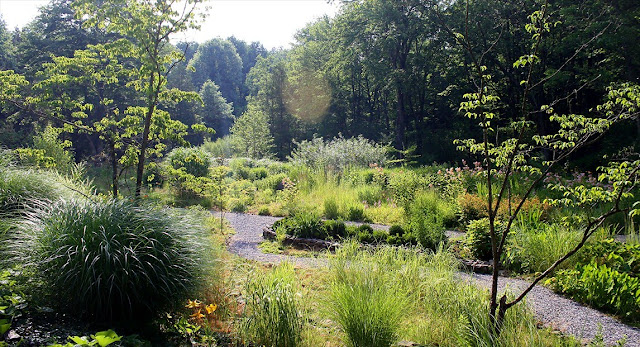 ... which wasn't easy. The piece is cast bronze, measures about 44 inches high and 36 inches across at the base, and must weigh in excess of 300 pounds). When I first saw it, a classical image of a beehive came to mind, thus the appropriateness to a naturalistic, pseudo-ecological garden, to use William Martin's (click 'Wigandia' if you don't know him) phrase, as adopted from someone (he thinks) in the UK. But the more I look at it in the garden, the less I think of a beehive. It's really quite abstract. Consider Marc's original name for it, 'Pay Dirt'. 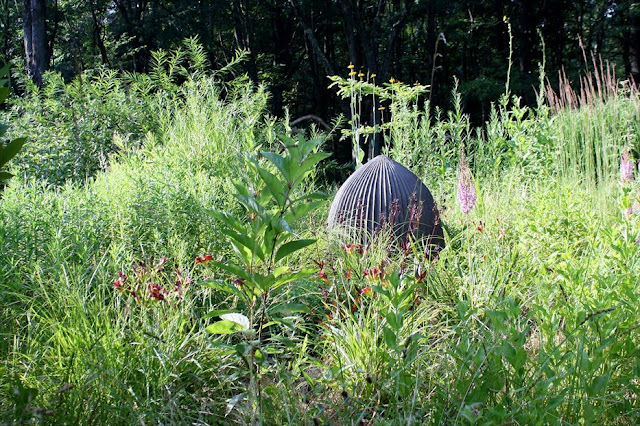 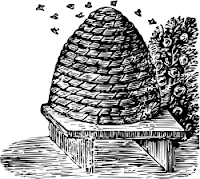 No. Abstract is better. Let it be suggestive of something else if you wish, or see it on its own terms.

It appears and vanishes as you walk around the garden. From some points of view, very prominent, from others, almost invisible. 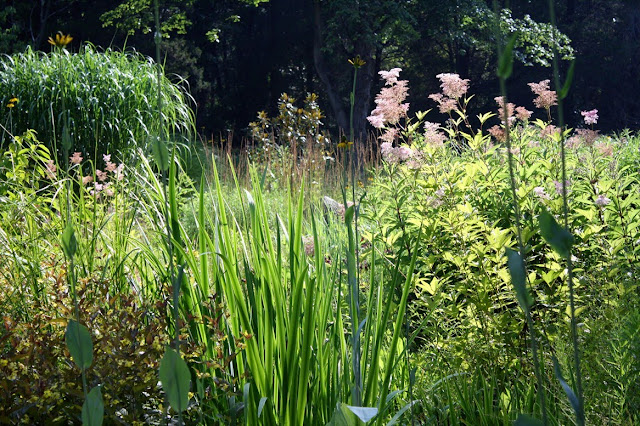 All these photos were made in the bright light of morning, on a very hot July 5. Below it takes on a dark solidity in contrast to the brightly backlit Filipendula rubra 'Venusta', Panicum virgatum 'Shenandoah', and Calamagrostis acutiflora 'Karl Foerster'. 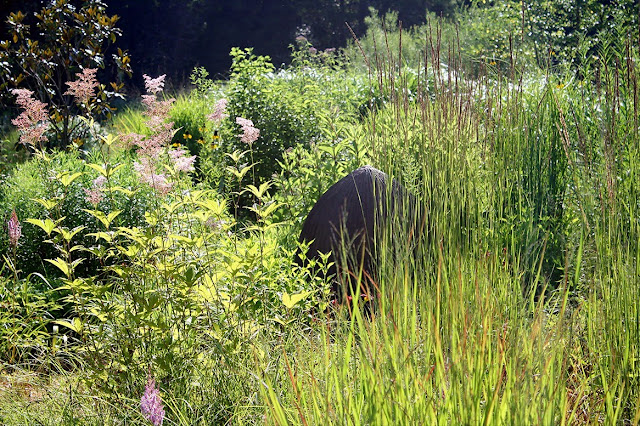 Or viewed from the other side, through Molinia caerulea 'Transparent'. 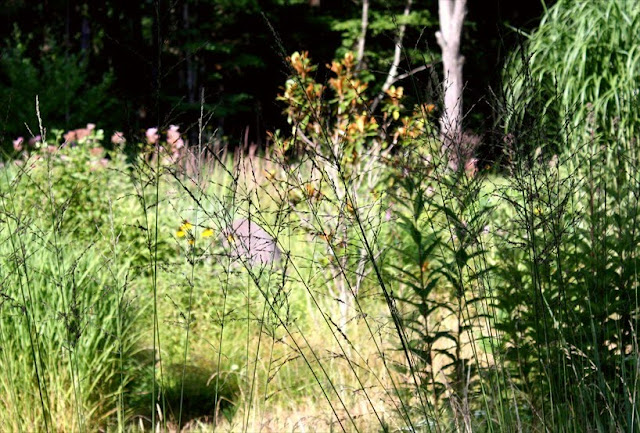 It appears to take on a blueish cast seen with the glaucous foliage of Rudbeckia maxima. 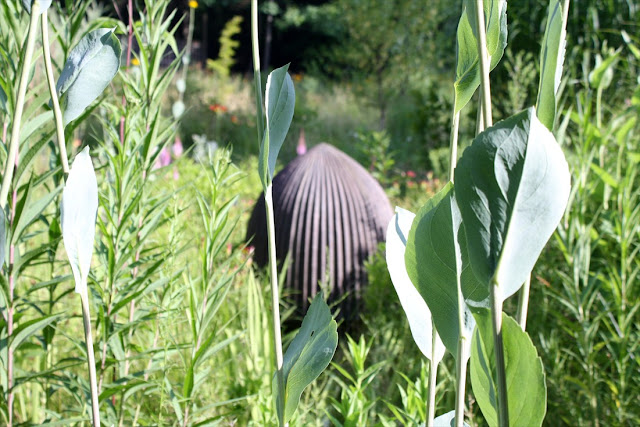 Or maybe R2D2 hiding in the bushes? 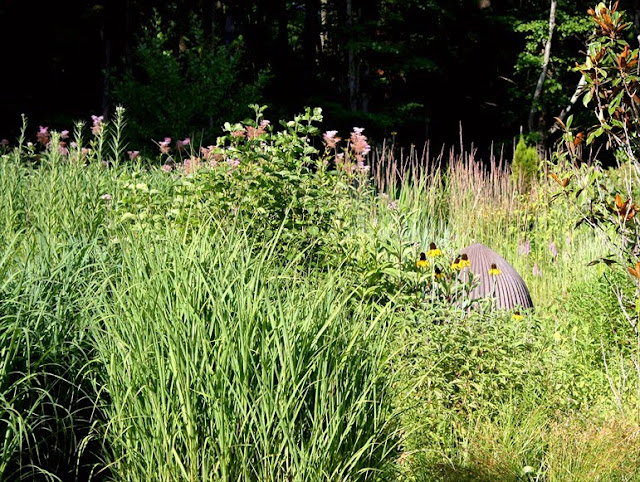 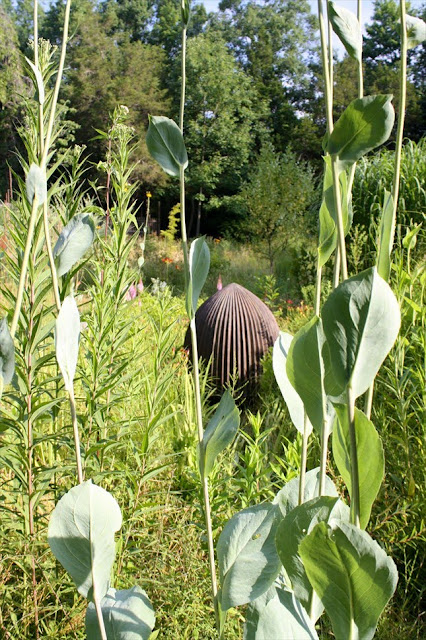 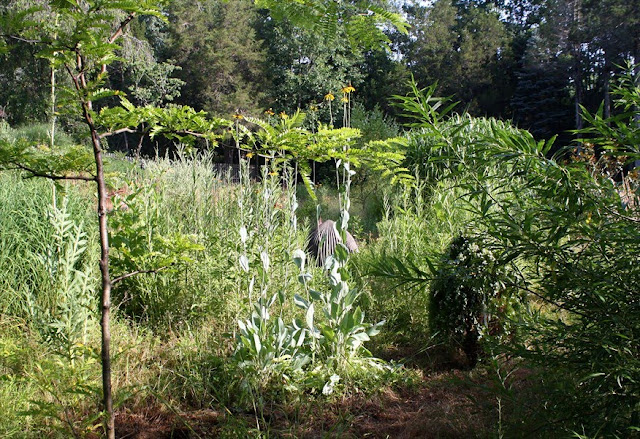 It's totally invisible from the path on the western side of the garden. 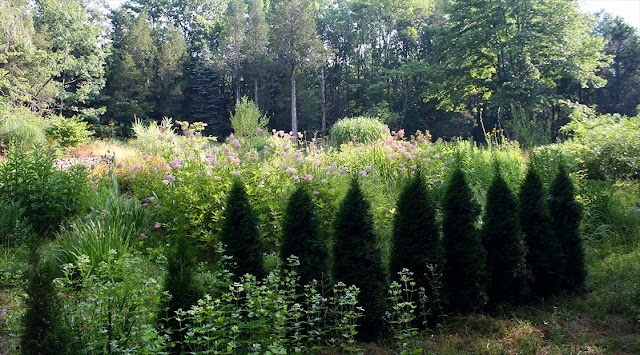 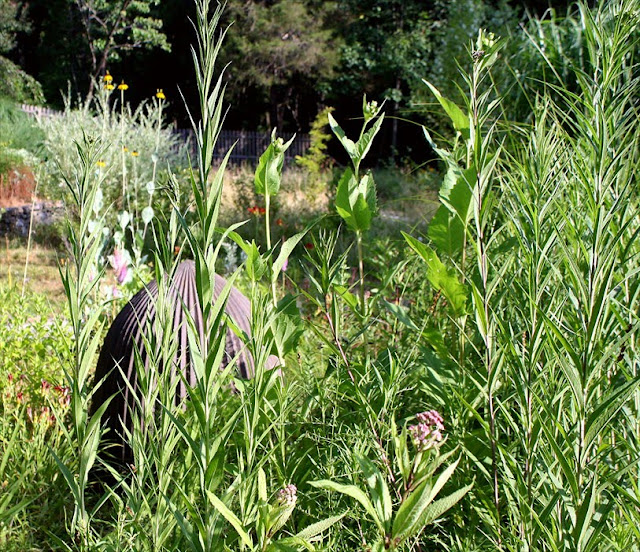 Even when it's not visible, the pictures provide useful context for an object that isn't garden, in the garden. 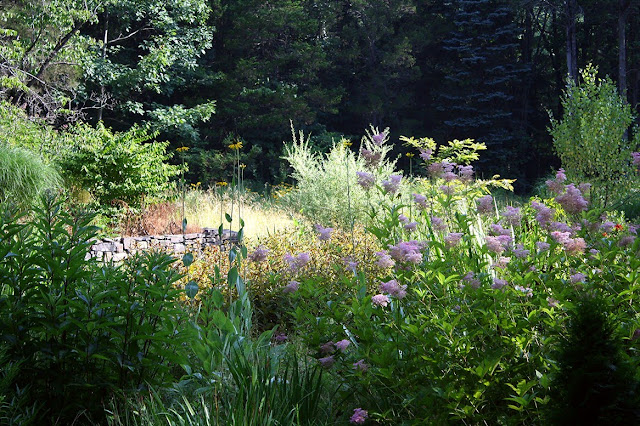 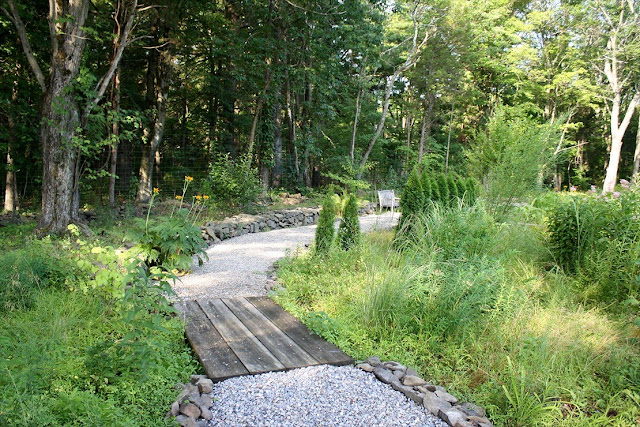 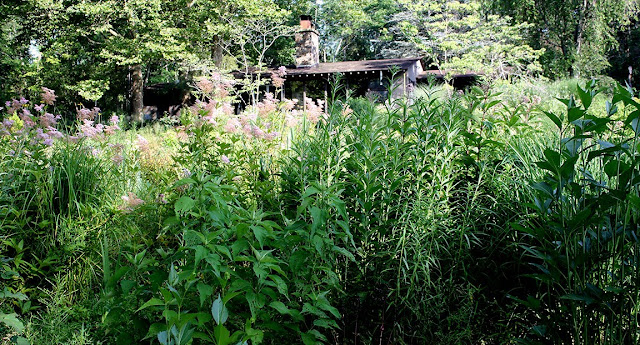 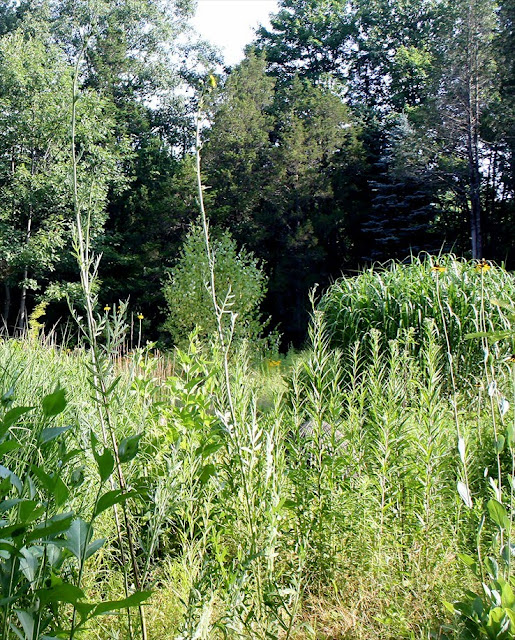 Completing the circle of the garden path, approaching the starting point, where it's only a few feet from the path... I have to say I feel this piece was made for this garden. Ironic, because Marc cast it 20 years ago, when this garden was a rough cedar wood. 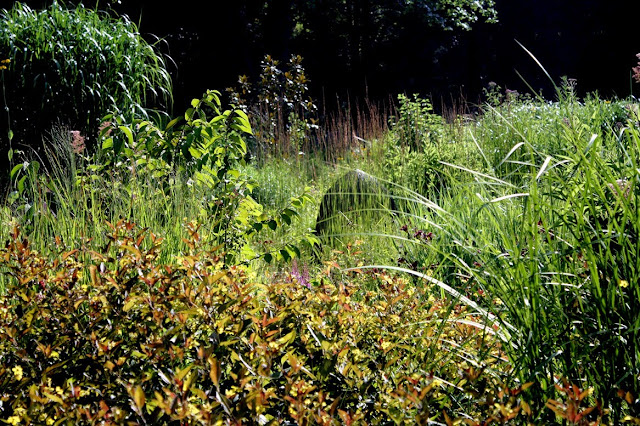 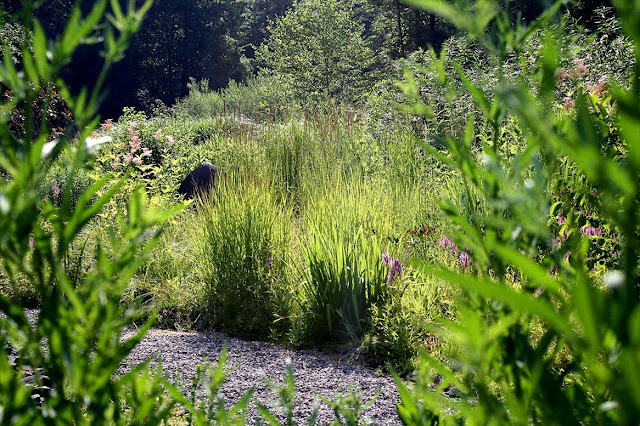 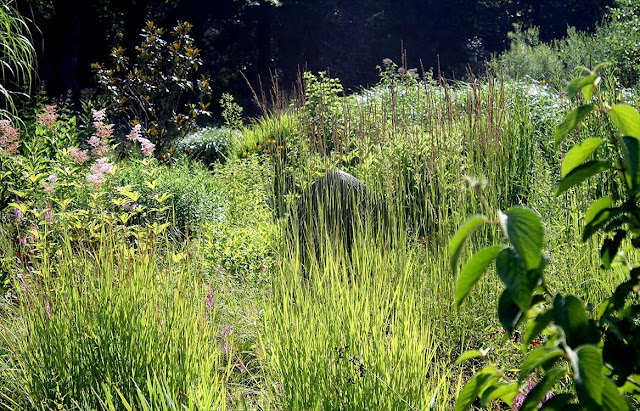 And the rest is context. 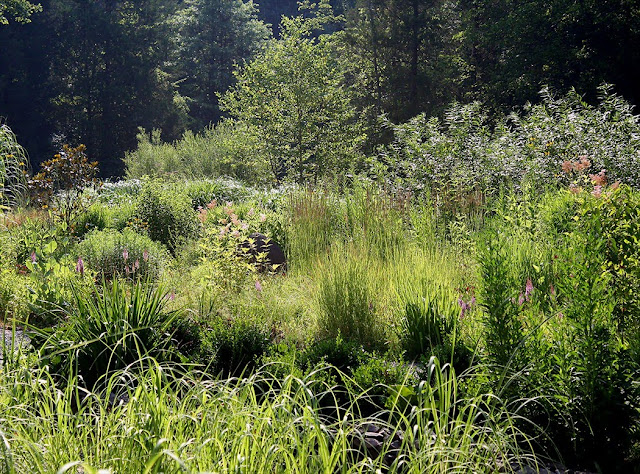 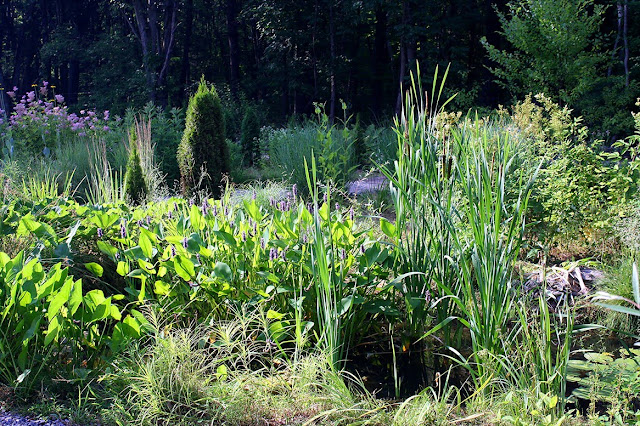 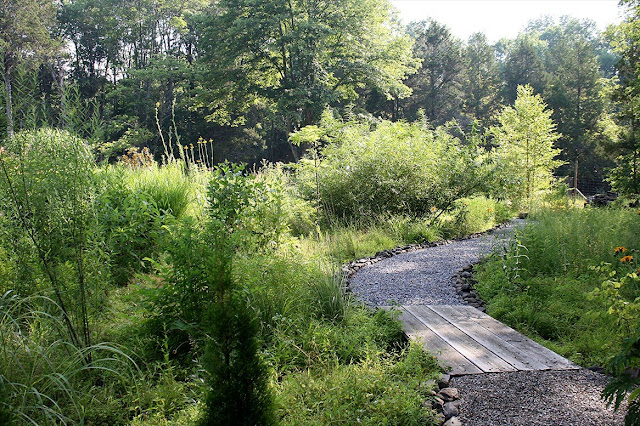