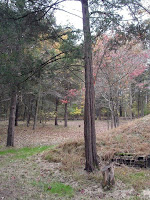 Faced with a blank slate (in my case a ragged woodland), how do you make a garden?

I didn't know I was doing this when I started the garden at Federal Twist, but my first task was to observe the landscape - in Dan Pearson's words (listen to his Vista podcast), to learn to read the landscape - the feelings evoked by the site, the physical characteristics of the site, and the culture and history of the landscape.

Feeling
This is a humble landscape: woods on a slope, no distant views, no big sky, a pocket of cedars within an older forest of beeches, hickory, maple, ash, ironwood and tulip poplars - a small, quiet place with no notable distinction other than long rows of stone running throughout the woods, physical reminders of past lives here.

The house, encircled by woods on all sides, was elevated about 10 feet above the surrounding land on a man-made mound. The emotional tone of the landscape was one, not so much of peace as isolation. The surrounding woodland, mainly cedar (Juniperus virginiana), came right up to the house. Though the space was open to the woods all around, there was a sense of enclosure, with little sky visible, and of neglect, perhaps dereliction, lent by fallen, unkempt cedars and, immediately next to the house, several dying cherry trees that were obviously inappropriate to the place. There was a lonely feel about the landscape, no other houses to be seen, no views out. 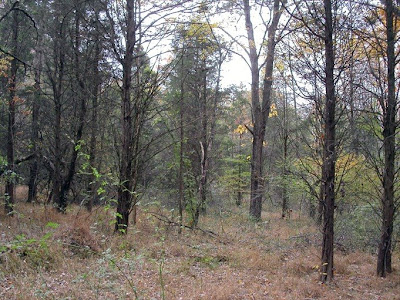 The Physical Landscape
The house had been built on a gentle slope in the first ridge of hills above the Delaware River, a gentle but steep enough slope to be easily visible and to promote rapid storm water runoff. The water treatment (septic) system was in a highly visible location, but fortunately most of it was underground.

It was clear this was not a promising place for a garden. I was determined to find a way to make one, though I wasn't sure how. Long stone rows, probably made by farmers in the 18th century, lined the property on three sides. I liked the historical reference they provided and their visual effect, separating us from the surrounding woods. I would later come to appreciate a ready source of native stone for making dry laid stone walls.

The house was also an important component of the landscape. Elevated as it was, to give a view long ago obscured by tree growth, it was visible from all points, at least in partial view. 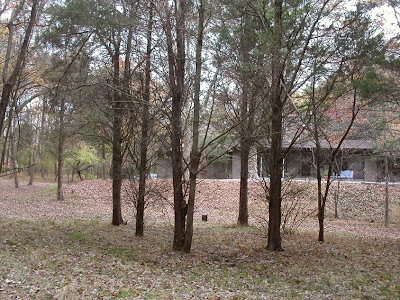 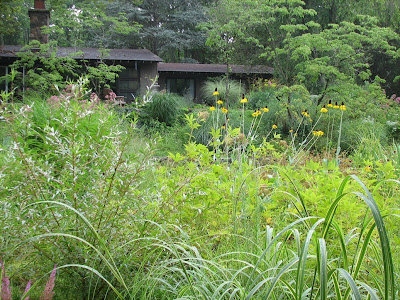 A mid-century house (see before and after above), with a low, simple profile, and a wall of windows facing the area to become the main garden, it had wide eaves suggestive of Japanese architecture and a modernist look that I knew would dictate stylistic choices when I began planning what kind of garden I would have. Fortunately the architect, William Hunt, had given consideration to the location, and designed a structure that had minimal visual impact on the surroundings.

The Cultural and Historical Landscape
When Dan Pearson talks of reading the landscape, he describes it as something he does quickly, in an hour or a day. I took much longer. Over time I began to speculate on the lives of the former inhabitants of the land, the early European settlers, the native Americans, the lives of the owners and operators of the 18th and 19th century mills that took their power for grinding grain and cutting timber from the Lockatong Creek a quarter mile below the house. 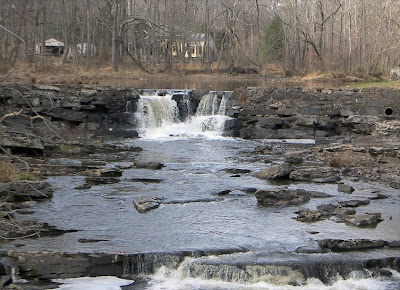 These imagined memories of the past came to posses their own power and to influence my understanding of the landscape. Some of that uneasiness, that derelict quality I felt on my first visits to Federal Twist, something unfinished or unknown about the place, became part of those thoughts about the past, and remained a background to the garden as it developed, always there though quietly and invisibly.

Making Changes
I understood we would have to clear a large area of the cedars to have any open space for a garden. This was appropriate because cedars are not typical of the surrounding forest. They are a part of the early forest succession, one of the first tree species to move in as open field begins the process of changing into forest. I would simply be returning a part of the land to an earlier state. Below is a photo of a corner of the garden following tree removal. Dogwoods near the house are just coming into bloom, and a stone row is visible at the edge of the property. 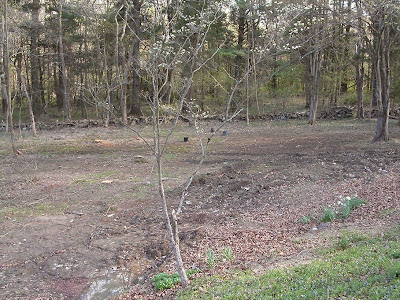 Early photographs of the house left by the original owners confirmed this fact, and showed me the importance of historical documentation. Their view in the mid-1960s was of an open field dotted with pretty, very small cedar "shrubs."

Misreading the Landscape
At the time we first saw the house and decided to buy it, we were having a very wet autumn. Of special concern to us was the water treatment system, particularly the drainage field where waste water seeps out through an underground network of pipes into the earth. At that time, the drainage field appeared to be totally saturated with water.

I initially assumed this drainage field, which had to be incorporated into the garden area, would be the wettest part of the garden. That turned out to be entirely wrong. My initial observations occurred during a period of unusually heavy rains, so the very wet conditions were, in fact, transient. This is actually the driest part of the garden because it is underlain with stone and rock placed there as part of the drainage system design. Below is an autumn photo of a planting over the drainage field. 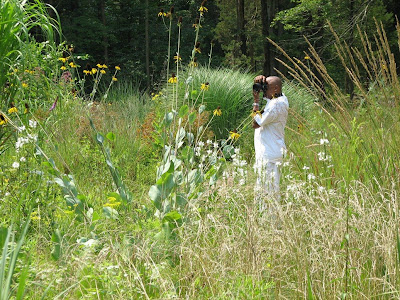 In fact, the land there is so dry, compared to the rest of the garden, I intend to plant colonies of Rattlesnake Master (Eryngium yuccafolium) this spring - a plant I've wanted to grow for its visual structure and texture but have feared to try since I may lose it. I'm taking a risk, because the area is totally saturated during periods of heavy rain. But isn't gardening about hope?

Moving from Hydrology to Metaphor and Design
The thought of drainage isn't one that warms most gardeners' hearts. It's a utilitarian issue that must be dealt with only when there's trouble. But for me it turned out to be the heart of the garden. It was immediately apparent to me that our land was, by legal definition a wetland, but at first I didn't understand that the flow of water over the land had in fact been a principal factor in creating the landscape as I saw it, and would define the landscape of the garden as it evolved.

Building the house on what in effect is a large earthen dam was a dramatic environmental intervention in the mid-60s. Now, over 40 years later, it is clear the wetland areas at the sides of the house and behind it were created by this intervention. Water, no longer able to flow directly down the slope to the creek at the bottom of our little valley, is diverted around the house and accumulates at the back. The house and its earth pedestal, being at higher elevation, quickly shed rain water, which joins the flow coming around the house to "supercharge" the back area - in fact, the site of the garden. Impermeable stone layers under the soil surface prevent percolation of water into the ground, leading to total saturation of the soil for long periods.

Other features of the garden followed from this reading of the landscape. I placed the canal-like pond to emulate a natural depression that might have been eroded by water flowing in a curve around the end of the house. 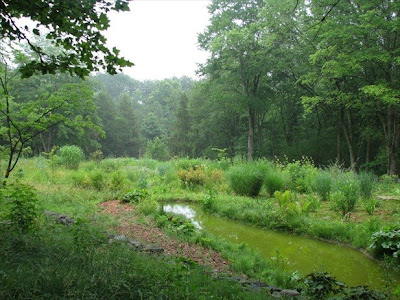 The curves of nearby stone walls repeat the curve of the water flow and outline the garden area as it opens out behind the house. 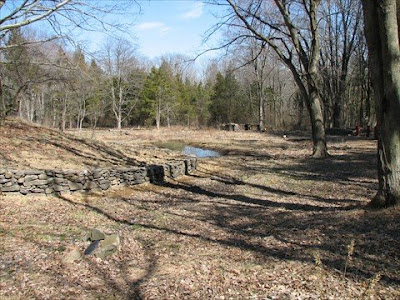 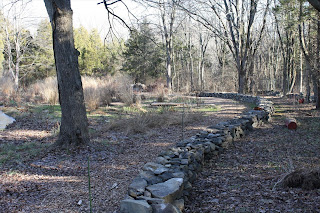 The garden proper is like a miniature river delta (made of plants instead of water) across which the water spreads out on its way down the slope to the Lockatong Creek, thence into the Delaware River.

This metaphor of the river delta - less grandly, this motif of water flowing over land - is now guiding the decisions I make about the garden. But the early felt emotions associated with the landscape and the lives lived there are present too, in the stone walls, in my consciousness, and in parts of the garden yet to be. 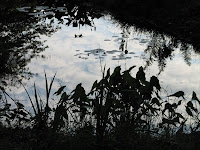