First Hurricane Sandy plowed through, stripping most foliage from the garden and wiping away the south border of trees. Then unexpected snow fell last week, heavy and wet, only about four inches, flattening most of the grasses. I thought the garden was over for the year. But the snow melted quickly, and the moisture saturating the plant tissues deepened the colors of the the rebounding grass, even on a foggy Sunday morning, giving them an inner glow. 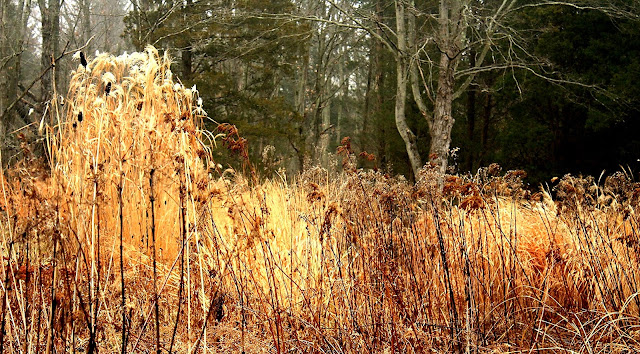 The bright grasses contrasted with the foggy greens and grays of the background woods, warmth against coolness, exuberant detail against muted vagueness. 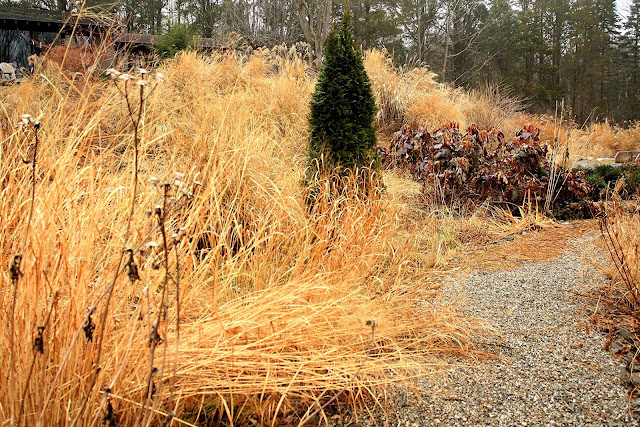 So I quickly took some photos, coordinated the work of my garden helpers, and left for the gym. As I drove down Federal Twist Road toward the Delaware, I felt elated. It's difficult to separate things in my life from things in the garden, but I had a sense of all the pieces fitting together. Like an epiphany.

A foggy morning (admittedly a pretty sight), a quick walk through the garden, a new paving, pool and planting started, and some mysterious state of mind or confluence of events had set me off on a journey of  ... what? Grace and gratitude? Not really, I was not to put into words what I was thinking or feeling  ... just say, my state of being. Two weekends back we visited Phil's mother, who is 92, in a Boston nursing home. We took her to the Museum of Fine Arts, which she enjoyed immensely. Next weekend, we're off to Mississippi to visit my sister, who isn't well ... Many things to be sad about. But sadness wasn't the tenor of this day. 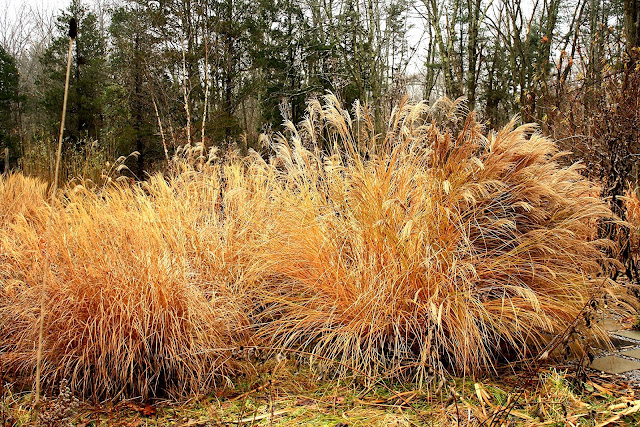 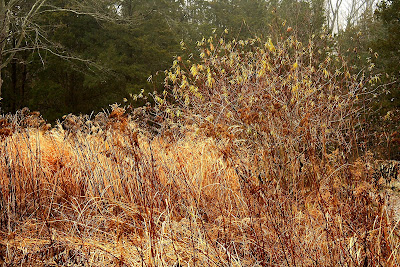 Only in retrospect was I fortunate enough to recall  the discussion of garden as epiphany in David E. Cooper's small book A Philosophy of Gardens:

"Pope's famous lines, in his Epistle to the Earl of Burlington, on 'the genius of the place', for example, surely evoke a conception of The Garden as an epiphany. For Pope, 'the genius of the place' does not refer, as it does for many later writers, to the ambiance or natural setting of a garden: rather, it is that which 'Now breaks, or now directs, the intending lines' and 'Paints as you plant, and, as you work, designs' (Pope 1994: 81 f.). Palpable, here is a sense of The Garden as both a response to and an exemplification of something beyond the control and invention of human beings."

"Something beyond the control and invention of human beings." I'm not a religious man, rather agnostic in the extreme, opposed to most organized religion. But I do make room for that. 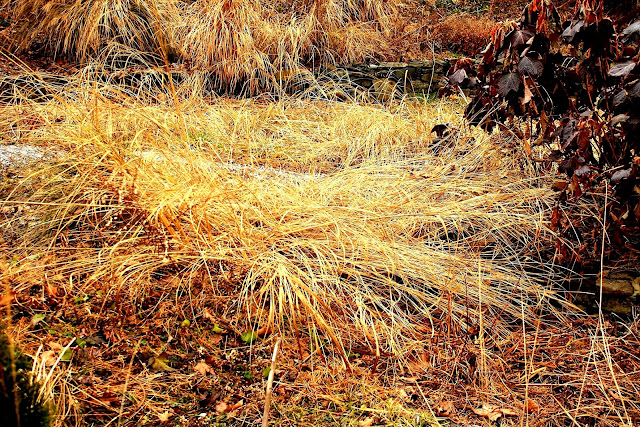 Certainly the thought of destruction, of the end of things, is suggested by these images. 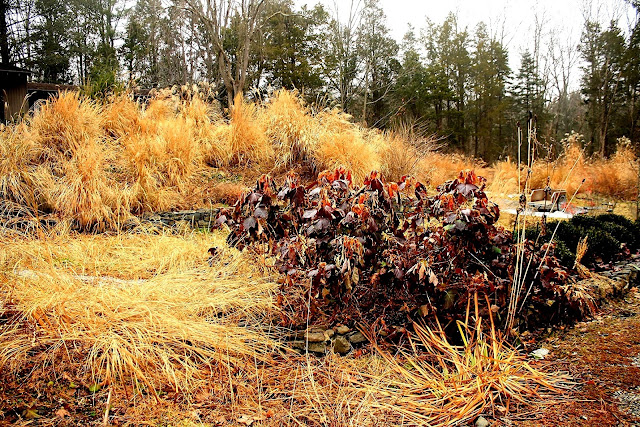 But equally so, the beauty of the disintegrating garden:  color, form, the narrative of living and dying, knowing that without this nothing returns in spring. 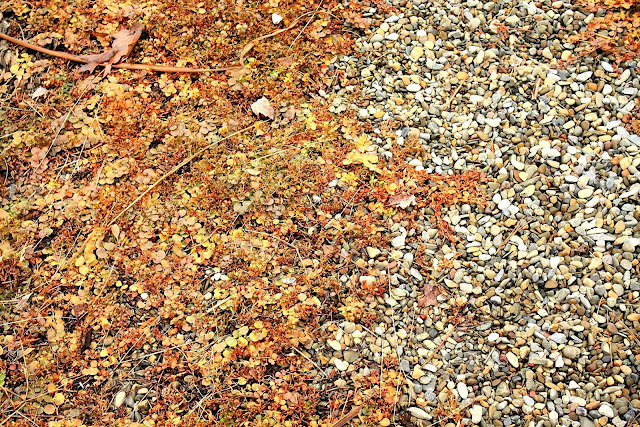 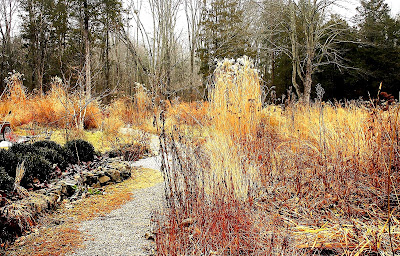 "Something beyond the control and invention of human beings." Chance storms, accidents, leave room for moments of fleeting beauty, unanticipated emotion, surprise, mystery.

Emotional response to these scenes isn't something that I will. Is it nostalgia, a desire to recreate or return to a memory, to a lost or half-forgotten landscape, as Thomas Rainer has proposed? To some early memory in this life, to a culturally defined preference for open spaces with areas for hiding? Like children, do we delight in the sparkle of a colored rock among the gray, imagining gems, rubies, sapphires, then recreate that delight as adults, even with colored sticks and grass suffused with light? 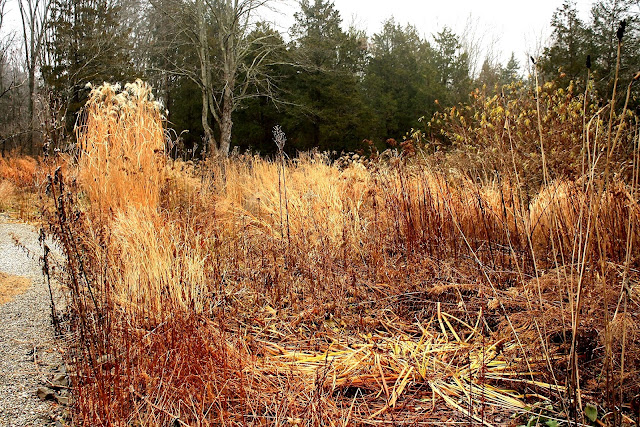 So to Wikipedia for word origin:  "The term nostalgia describes a sentimental longing for the past, typically for a period or place with happy personal associations. The word is a learned formation of a Greek compound, consisting of νόστος (nóstos), meaning 'homecoming', a Homeric word, and ἄλγος (álgos), meaning 'pain, ache'." 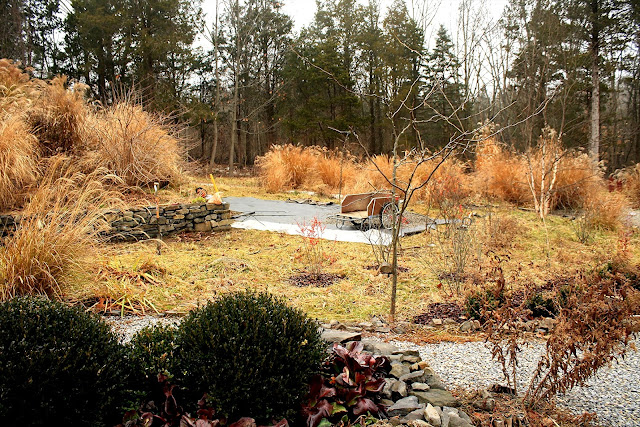 So "homecoming." I feel that in the garden; have felt it for many years ... a place to contemplate, to remember. To ache for something past. And to seek what may never have been known. 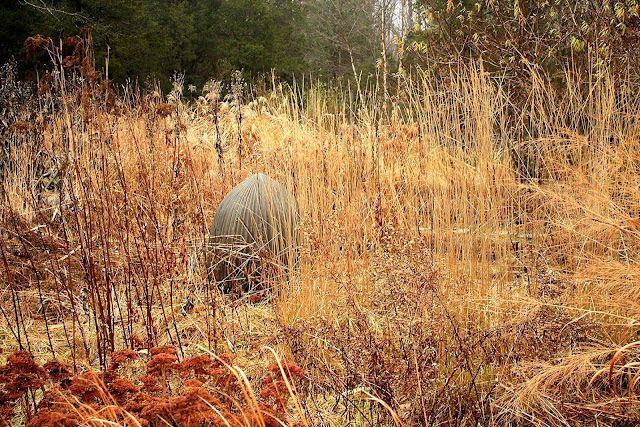 "Something beyond the control and invention of human beings." A place to create, to participate in a kind of mystery, perhaps an unforeseen gift. 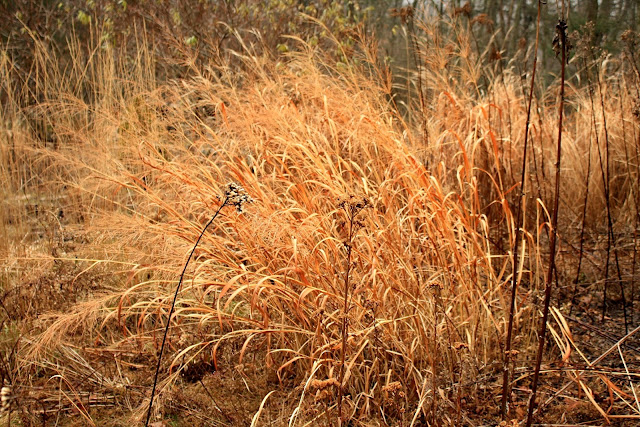 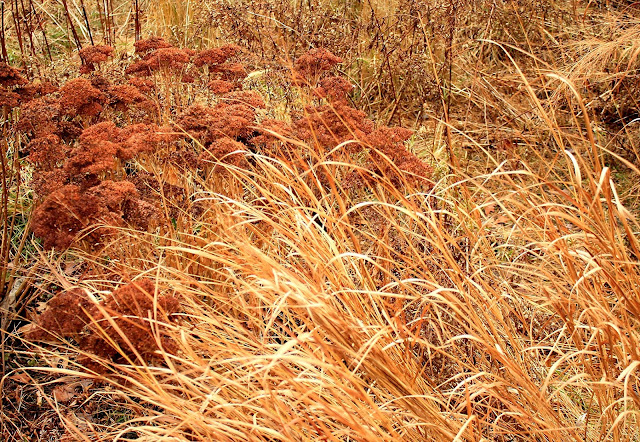 "Paints as you plant, and, as you work, designs." 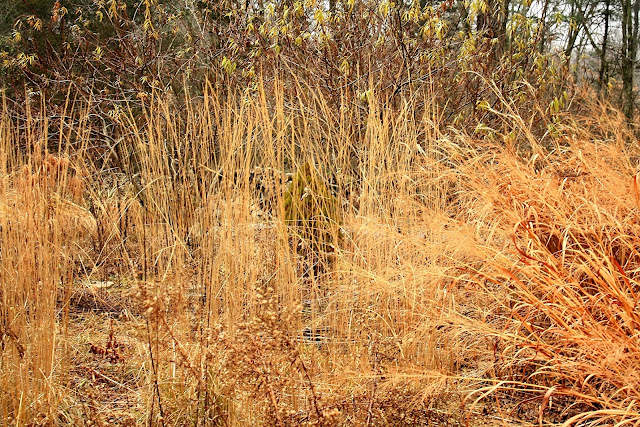 Perhaps one should pray for guidance, even if a severe agnostic, before making a design decision. Chance plays a part in all decisions and when I put in this path, it was the wrong decision. So now it's coming out to be replaced by new plantings. And in its place a major renovation ... 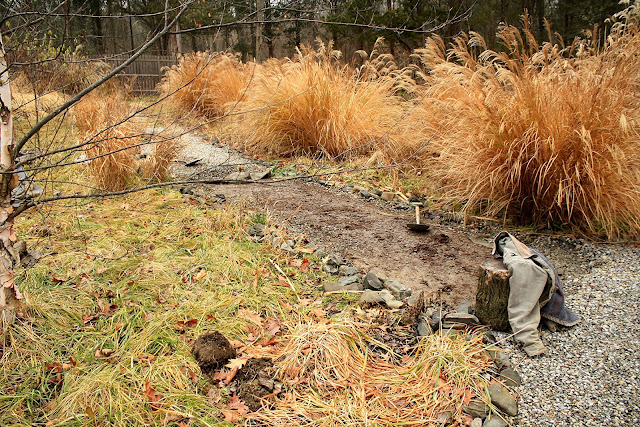 ... a new area, the gravel base now being laid, for a reflecting pool, shallow, just to catch the light and sky, and a paved surface - more open space, more void - all with curving borders and narrow, winding paths. Here's a primative sketch (I can't draw). 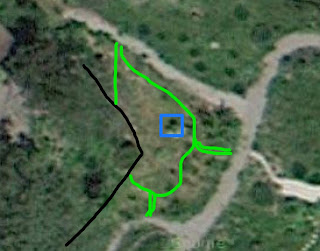 The planting will be thick, with glimpses in to the straight stone wall and to the water. The void, like silence in music, may make the plantings sing. 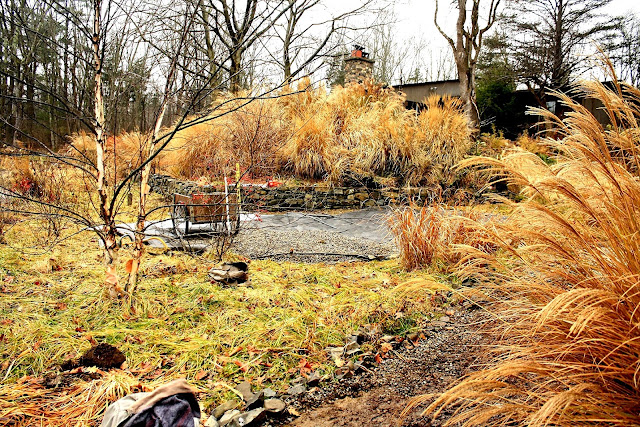 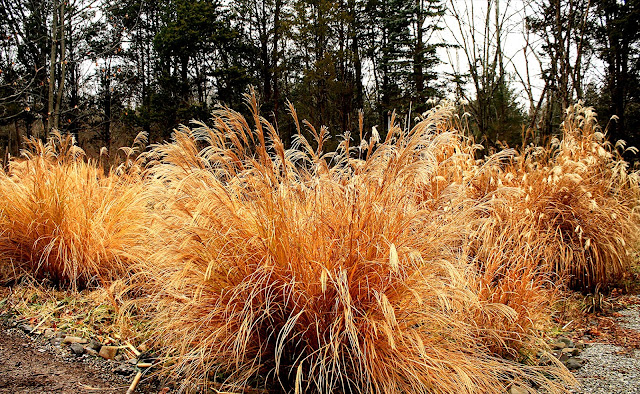 Though Panicum, in this case 'Dallas Blues' (below), may win for color. 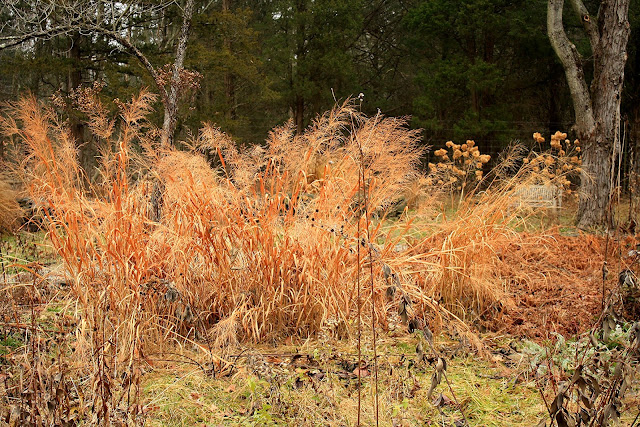 Keeping Miscanthus in mind, and looking toward the new sky where the large trees fell so ungracefully a month ago, I can see three or four Miscanthus giganteus would make notable additions to the hedgerow I'm planning at the far end of the path below -  giving a satisfying visual conclusion to the now empty southern end of the garden. They might open better views into the woods by giving the eye something to look through, and complete the "bowl" of the garden, so clearly visible in autumn. 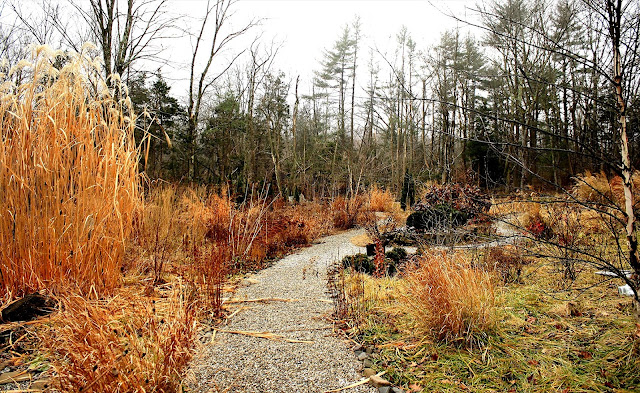 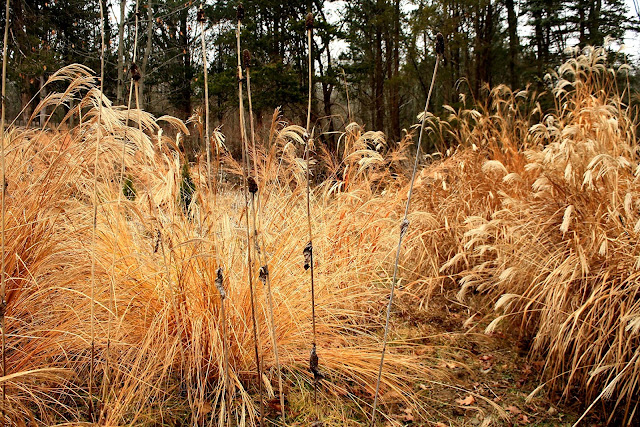 You get the drift? Layers of Miscanthus, up the hill, across the field. 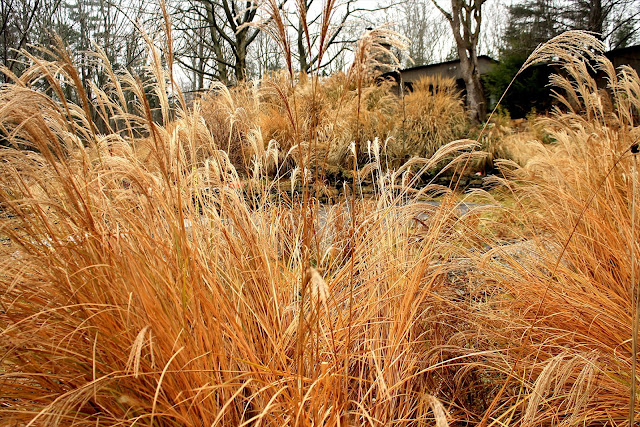 And possibly for accent, a rare native shrub, Zenobia pulverulenta, a dusty, glaucous green through spring and summer, and in magnificent plumage in early December. 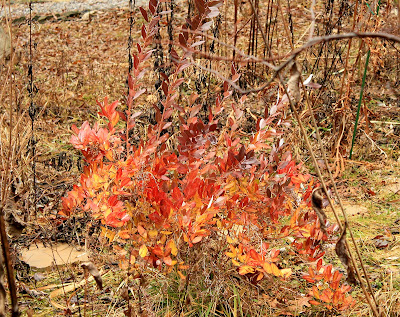 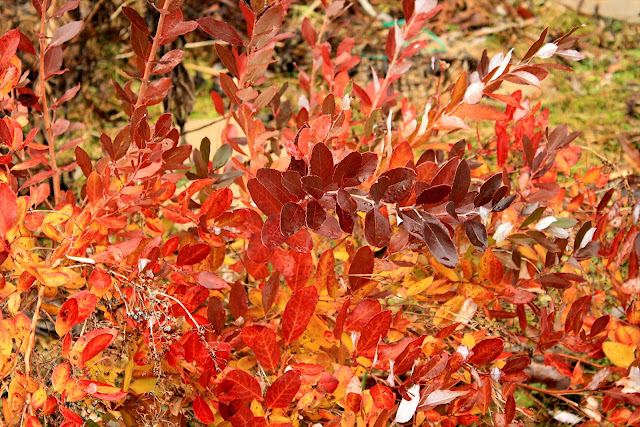 And more of these Inula racemosa 'Sonnenspeer', of course. They seed like crazy, and I still don't have enough. 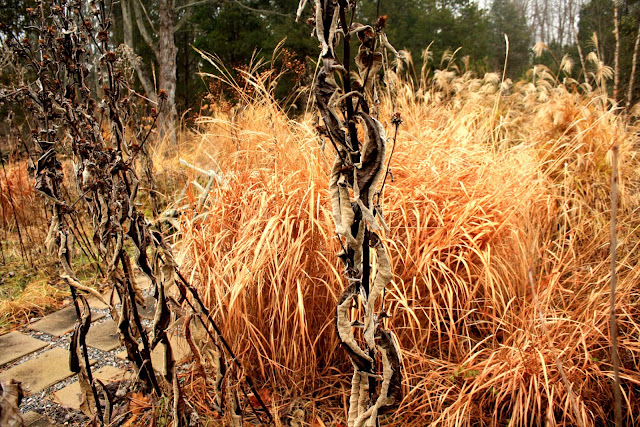 So as we prepare to leave for Mississippi, I make farewell gestures to the garden, now fading fast as the toughest part of winter approaches. I'll be visiting the place of my childhood, remembering, searching out the empty spaces ... and thinking about more changes in the garden. Labels: A Philosophy of Gardens, Alexander Pope, David E. Cooper, grounded design, Mystery in the garden, The genius of the place, Thomas Rainer