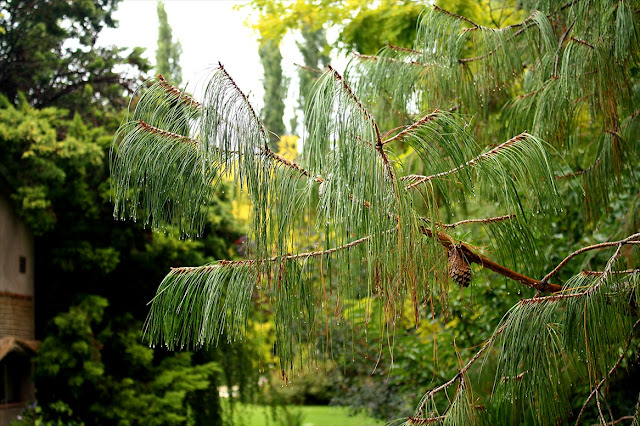 Amid the arid, dusty landscape of Mendoza, Argentina’s premier wine-producing region, our delayed arrival at the lush garden refuge of Casa Glebinias was almost a shock.

We got lost after leaving the airport, and drove through miles of dry, brown, exhausted-looking countryside until I pulled off the road at what appeared to be a gasoline station and restaurant ... the sun bright and harsh, the landscape desolate.

So when we got back on track and finally turned off the highway into the town of Chacras de Coria, the grand sycamores lining the road were a welcome relief. It was clear they only survived because a ready supply of water was available from what looked like crude drainage ditches on either side of the road. (We were to learn that these are small canals, part of an enormous system of canals that have brought water from the nearby Andes to this arid landscape for centuries.)

That imported water makes Casa Glebinias possible. The owners, Alberto (who speaks Spanish, Italian, English and French) and Maria Gracia (who speaks Spanish, Italian and French), have created a place where landscape, garden, and built structures achieve a graceful unity. As you reach Casa Glebinias, you stop your car, unlock a shining wooden gate, and drive in, where you're immediately engulfed in vegetation, the low tree limbs brushing across your windshield as you move slowly forward.

Only after driving 30 or 40 feet does space open up enough to reveal glimpses of buildings in the distance, but it's hard to tell where the buildings end and the gardened landscape begins. 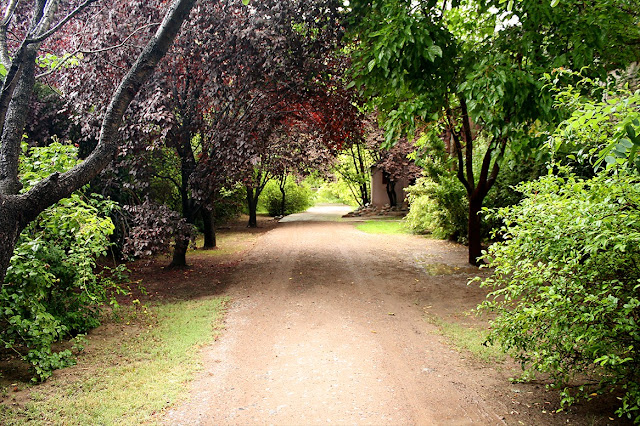 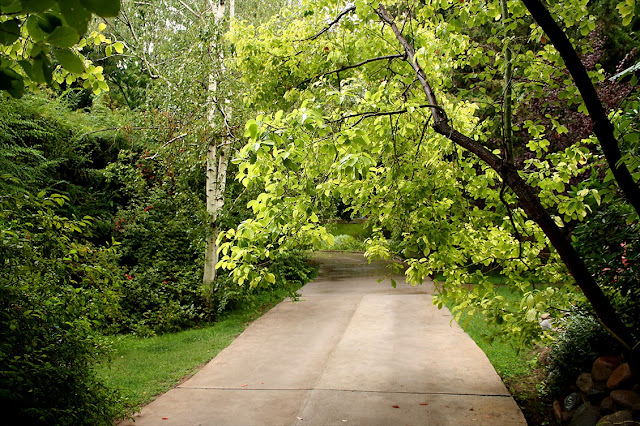 Reaching the main house, the residence of the owners, is a little disorienting. The steps up to the house rise from a sudden curve in the driveway. The house itself is invisible at this point, and the parking area is hidden off to the left. The uncertainty about where to go, which way to turn, could be could be disconcerting, even annoying. But it isn't. Instead, it heightens awareness and anticipation, a feeling that something unexpected is about to happen. So when the car is safely parked, and you get out and look around at this garden setting, there's a strong sense of arrival, of calm refuge. If you're at all like me, you'll also feel excitement, anticipation. You'll be itching to explore the garden.

Note above how little space is allowed for automobiles to turn left for parking. It's clear that cars are an afterthought here; something else is much more important than mode of transport. In the US, local codes would probably force the owners to provide a spacious, paved, traffic-worthy parking area that would do much to destroy the pastoral ambiance of Casa Glebinias.

The owner's residence (below), at least in summer, is always open; windows, doorways frame views to the outside, and bring outside inside. Going into the house doesn't feel like going inside. There's an airy lightness of space that subtly calms the autonomic nervous system. It just feels good, like standing in open shade looking out to the sun. 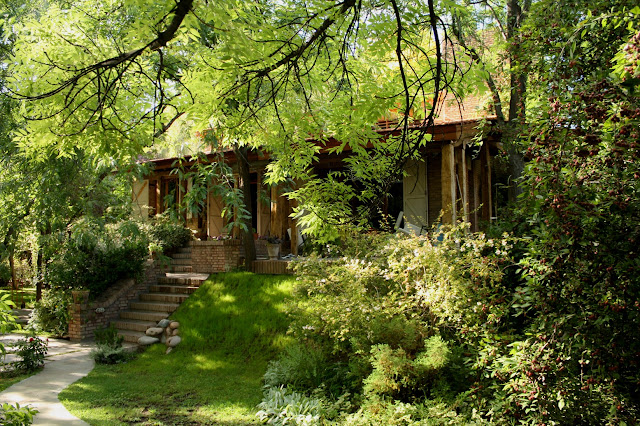 Before the history of Casa Glebinias was told to us, we assumed the guest cottages were perhaps 100 to 150 years old. Large trees come within inches of the exterior walls, and the architectural elements--windows, doorways, wooden beams, lock sets, doorknobs--clearly have great age. Imagine our surprise when Alberto explained that these had been built only five or six years ago.

It's difficult to conceive how our cottage (below) was constructed without damaging the surrounding trees, and not just ours, but all the cottages are situated adjacent to large trees ... their construction is an amazing demonstration of care, intention, and focus. Working with their close friend, architect Octavio Vitali, Alberto and Maria Gracia achieved an amazing feat of design and construction within their 30-year-old garden. 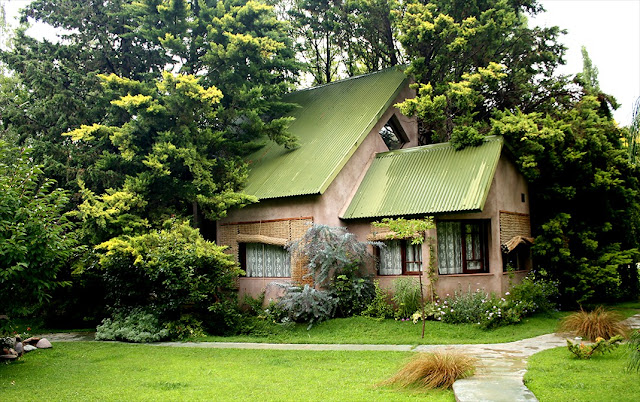 On first impression, you might think such a project couldn't possibly follow sustainable principles. But the cottages were built of salvaged materials. Even wood for support beams was taken from old structures and reused, as were doors, windows, and ornament. For cooling, the windows are screened with lace curtains inside (to keep out hot sunlight but let through air) and outside heavy grass mats--which  have a Tolkeinesque "Hobbit" charm--can be rolled down in the height of the day.

The entrance to our house, from the inside, showing the care taken to reuse an old doorframe and doors, and old wooden beams in the ceiling structure ... 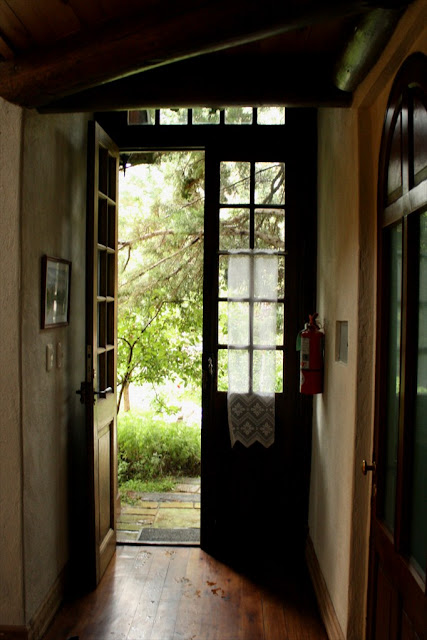 ... and from the outside. I watched the old musical Brigadoon last night. That extraordinary and magical place appears only once every 100 years. But should you choose to visit Casa Glebinias on any day in any year, it will be there. The patina of age and sense of place the owners have created recalls just such magical stories. 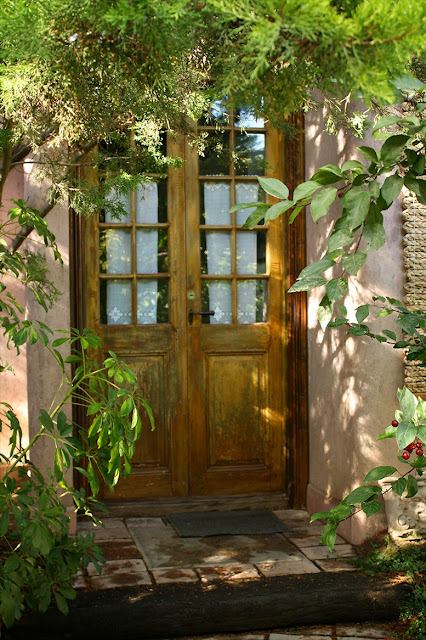 Shady sitting areas are hidden away throughout the garden, providing relief from the heat during the day, and a pleasant place to read or talk away the twilight hours. 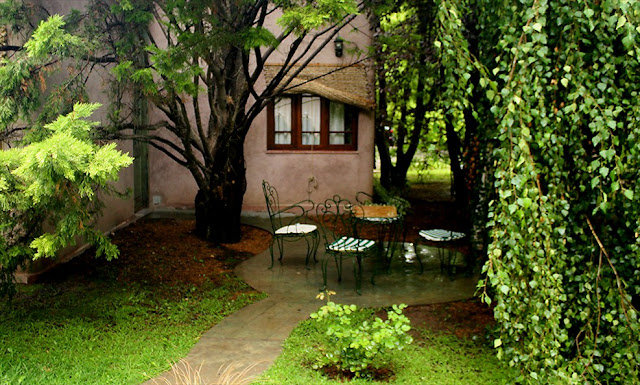 Ornamental conifers, a cosmopolitan selection of deciduous ornamental trees, fruit trees, grasses and some perennials are the principal elements of the landscape. This is definitely not a native plant garden. It's a garden that uses plants that are suitable to the place, considering the climate and almost universal availability of water from the Andes. 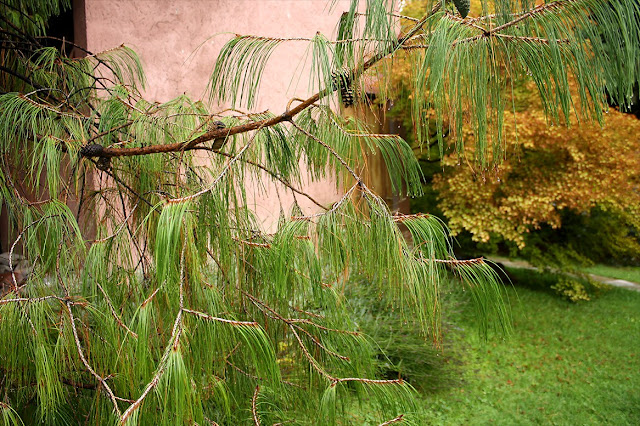 ... Robinia pseudoacacia 'Freesia', which I thought was unusual to see in Argentina, but well informed sources there tell me it's widely planted. There are several at Casa Glebinias. 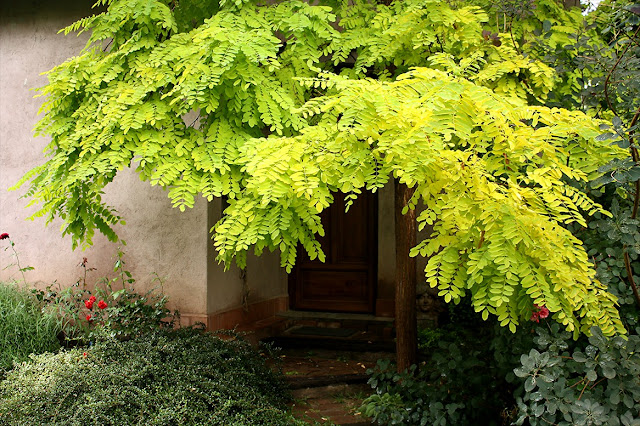 A pretty contrast of colors and textures. Sorry, don't know the names. Not up to speed on conifers. Or acacias (silver leaves). 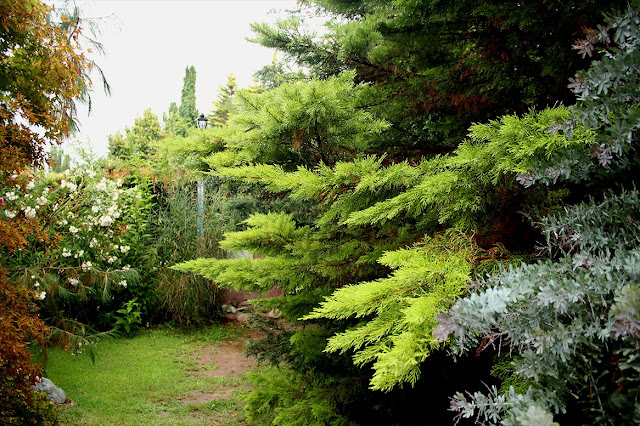 View across the lawn to the pool, nestled into a hedgerow of shrubs, roses, and conifers, with another Robinia to provide dramatic highlight to the scene. 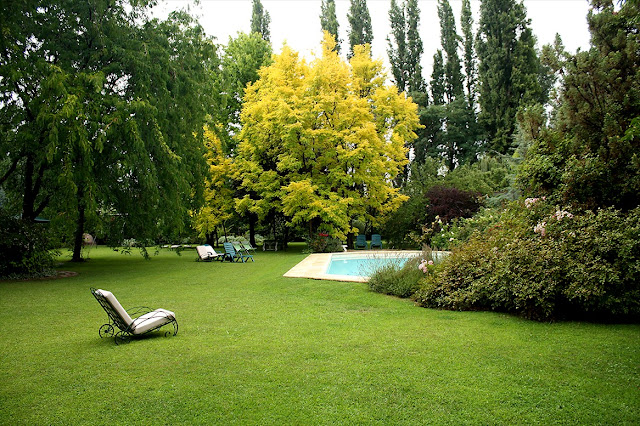 The theme of purple and gold is repeated throughout the garden ... 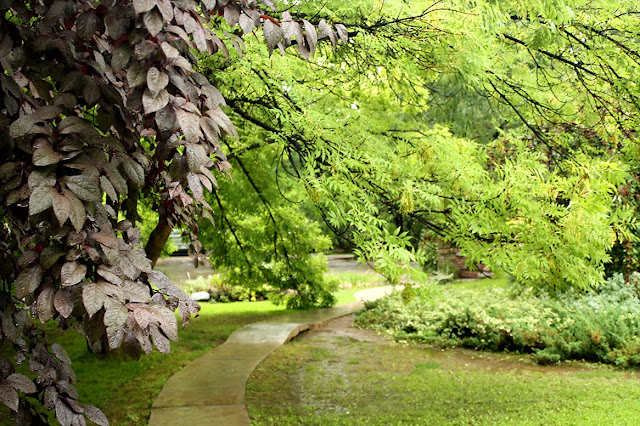 The Pinus patula again, at the entrance to a cottage, showing how ingeniously the buildings were built within the existing plantings. I wish I had asked Alberto how he managed to accomplish this amazing feat. I've never seen anything like it before. 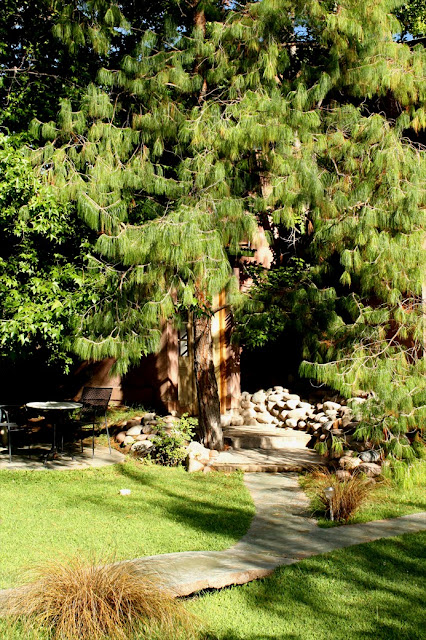 A fruit of a North American tree, the Sweetgum (Liquidambar styraciflua), on the pavement in the parking area suggests the foliage "reliefs" Alberto and Maria Gracia used in some of the paving stones shown  below ... 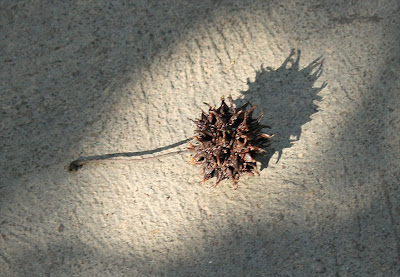 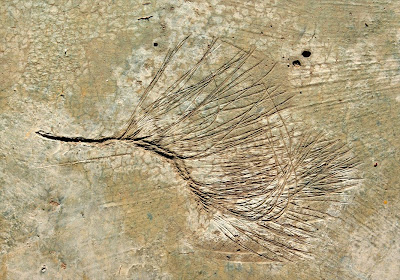 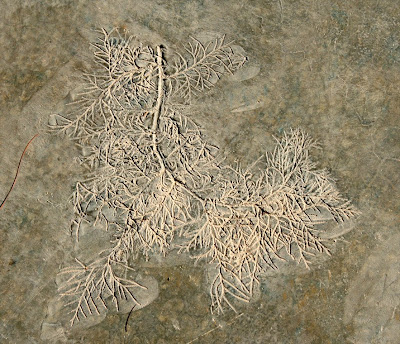 I was curious what the word "glebinias" meant. When I asked Alberto, he explained that he and Maria Gracia chose a name that reflected their love of trees. Sort of a private pact only those who ask will understand. They combined the names for two trees they use throughout the garden--Locust (Gleditsia triacanthos) and Robinia pseudoacacia 'Freesia'--to make Gle-binia-s. 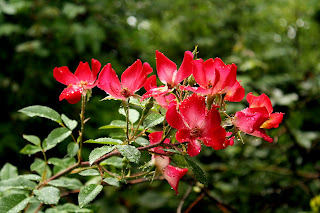 Even if you don't go for the garden, this is a quite and peaceful place to stay when visiting Argentina's wine country.
Posted by James Golden at 7:30 PM