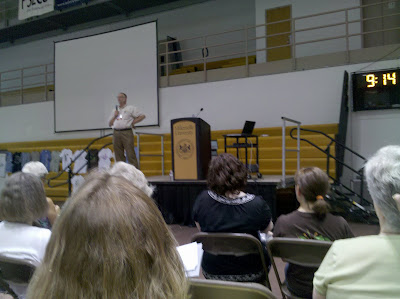 Niel Diboll of Prairie Nursery "preaching" his anti-lawn sermon.
It wasn't anything I would have expected. I've been attending the Native Plants in the Landscape Conference since yesterday (it ends tomorrow). This conference, held at Millersville University near Lancaster, Pennsylvania for the past 20 years, is one of the major native plant conferences in the US. Until this year, I've felt something of a heretic, never having been a purist where use of native plants is concerned.

This year there appears to have been a programmatic effort to question the lock-step approach to "natives only" that has characterized the native plant movement for so long in this country. This year, a definite theme seems to have emerged, beginning yesterday with the keynote talk by William Cullina, a well known author and Director of Horticulture/Plant Curator for the Coastal Maine Botanical Gardens. The title, "Unraveling and Re-raveling the Web of Life," only hints at a message I think long overdue--that the very concept of native plant is a changeable thing, subject to the changing conditions of the earth, in different times and places. Plants move in response to these changes, and their native ranges change over time. Cullina gently but persuasively broadened the definition of native, raising such difficult questions as whether isolated pockets of native vegetation on their way to extinction should be moved to new places, where the climate and conditions are more suited to their needs. The thrust of his talk was that the definition of what is native is not a simple or easy question to answer.

The second keynote talk of the day, "Perennial Plant Communities: The Know-Maintenance Approach," was really about plant sociology, plants growing in communities, though the word sociology was never used. (I think even our "experts" feel they have to be gentle, and do a little "dumbing down" to avoid alienating North American audiences.) This second keynote talk was given by Roy Diblik, co-owner of Northwind Perennial Farm in Wisconsin. Roy is the man who supplied Piet Oudolf with plants for the Lurie Garden in Chicago's Millennium Park, and he is quite a garden designer in his own right, having recently designed beautiful plantings for the Chicago Art Institute. He spoke about the necessity of growing plants in plant communities (another very important theme of this year's conference), and the need to move away from the awful American compulsion to dot a few plants about amid mounds of wood chips and mulch, toward a more natural style of planting based on intimate knowledge of plants and their individual needs. Roy's approach is very closely akin to the approaches to planting design I've read about for years in the works of English garden writer Noel Kingsbury, Piet Oudolf, the American design firm of Oehme & Van Sweden and, of course, many others in the "New Perennials" movement, and, before that, in the seminal work Perennials and Their Garden Habitats, originally written in German by Richard Hansen and Friedrick Stahl, and first published in English in 1991. The concept of plant communities, or course, raises the bar, so that we think holistically about systems of life and not about just individual plants, how communities function and grow, and how much labor is involved in their upkeep (not a lot since stable communities don't require a lot of human intervention). Roy also struck an extremely romantic note, stressing the emotional component of beautiful, carefully orchestrated plantings, and noting how ugly some native plant restorations are--because no consideration was given to these broader concerns of the garden, the gardener, and the garden visitor.

The third keynote talk, by Niel Diboll, owner of Prairie Nursery, and an acknowledged leader of the native plant revival, particularly prairie plants, declared war on the American lawn. With a passion and style that reminded me of a bible thumping preacher on a revival crusade, Diboll enumerated the extravagant costs of the American lawn in terms of what he called the four Es--esthetics, environment, energy, and economics. He's convinced the American love affair with the useless, polluting, environmentally sterile (no, environmentally harmful), and costly lawn will end, not because Americans will be converted to more ecologically sound beliefs, but because the cost of maintaining this socioeconomic shibbolith is simply too great and it will eventually collapse under the weight of its unsustainablility. Diboll's vision to use native plants to help restore the balance of nature, and the sanity of our insane culture, reflects a profound understanding of the complexity of plant communities, and of the need to think about planting in terms of community.

Larry Weaner was the major speaker this afternoon. His ostensible subject was incorporating ecological restoration techniques into landscape design. He, like Roy Diblik, emphasized the importance of understanding the whole plant community and its behavior over time. Larry's talk was much more technically detailed than Roy's, and he demonstrated the immense knowledge needed to create a successful meadow. Near the end of his talk, he also introduced the concept of allowing a certain element of chance to participate in the design of a planting (self-seeded plants, or plants introduced by animal life), an intriguing idea for the more conceptually oriented gardeners and designers in the audience. Weaner's talk helped elevate the conference to a new level of sophistication.

It was heartening to hear Roy Diblik recommend one of Noel Kingsbury's books. In the past, the Europeans have been virtually non-existent at this conference ... are we, perhaps, about to break the blood-brain barrier between British (and European) gardening and American gardening? Whether this new direction at the Millersville conference illustrates a new direction in the native plant movement, a maturing of the movement in general, remains to be seen. But it is certainly a hopeful and exciting change. 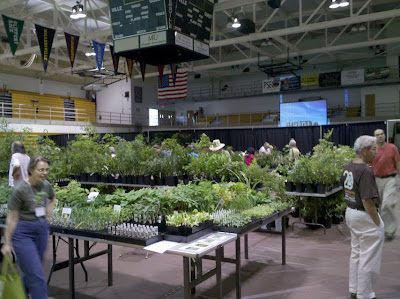 The native plant sale at the Millersville conference is one of the best anywhere.
Posted by James Golden at 11:19 PM