The Patagonian Steppe: My Vacation Surprise 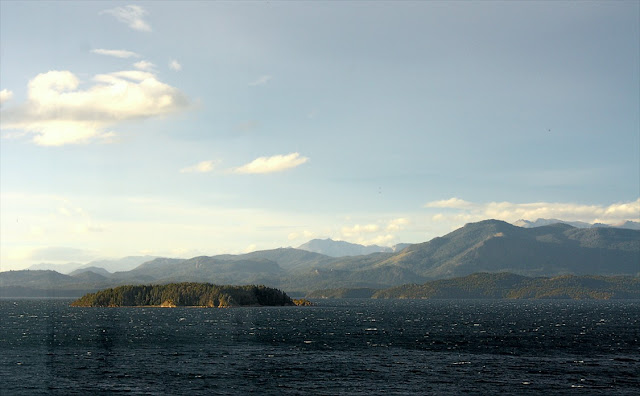 Lake Nahuel Huapi surrounded by foothills of the Andes
Whenever I travel or visit other gardens, I'm always on the lookout for ideas, new perspectives, solutions to problems, that special plant - all of these are practical matters. Even more, I want to see how the spirit of a place is reflected in a garden. The same goes for wild areas where native plant communities (and these days, environmentally appropriate non-natives which are always present) have "grown into" a space, how they have adapted to soil and moisture conditions, exposure, various environmental threats, how they have become a part of the "self-designed" natural garden (though no such thing exists).

An Extraordinary Discovery
On a recent trip to Argentina and Chile I hoped to do some interesting garden touring. After last minute attempts to reach contacts who might gain me access to some gardens of interest failed, I had almost given up hope of finding anything more than poorly maintained public parks and public gardens. Then, on a side trip to San Carlos de Bariloche in the northwestern Patagonian lake district, I unexpectedly discovered an extraordinary thing as the airport taxi sped through a desert-like landscape in route to our hotel on the shore of Lake Nahuel Huapi. Though I didn't know it, what I was seeing was the Patagonian steppe.

One plant in particular caught my attention: this tufted grass with quite dramatic whitish plumes. I later learned its name is Coiron, but more on that later. 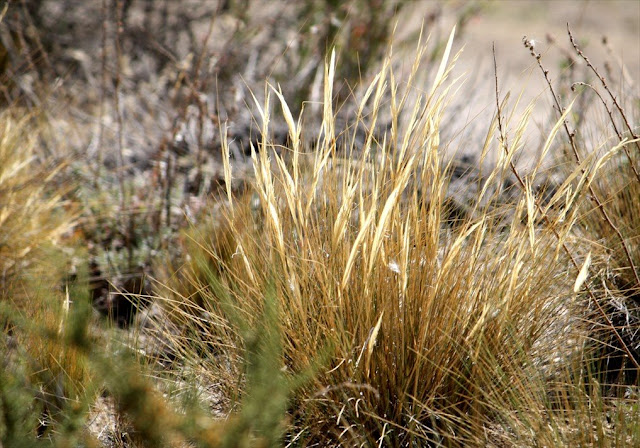 Plunge into the Unknown
On our second day in town, we took a plunge into the unknown (at least to us). We drove to the east end of the lake where I knew we would find the arid landscape I'd seen driving in from the airport. We left the main highway, and headed east on a dusty gravel road. The main landscape feature was a volcanic hill, called Cerro Leones (see below), with steep vertical cliffs, and volcanic caves, which you can tour, but only with a guide speaking Spanish. 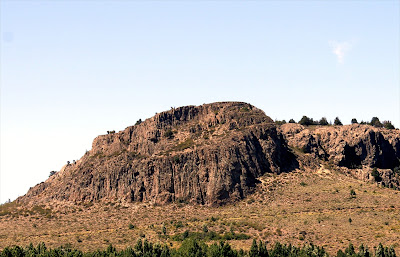 Cerro Leones
At the base of Cerro Leones and extending out for miles was a stable ecology of plants well adapted to the brilliant sunlight and dry climate. The next three photos show how well the vegetation covers the land surface, even in the late Argentinian summer (equivalent to late August here). Even more impressive is the range of colors and textures (click on the photos to see more detail). I can only imagine the effect during earlier, wetter periods when many of these plants are in bloom. 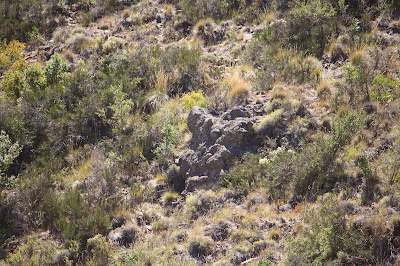 You can see many plants take the form of matts, tufts, and small shrubs, so closely spaced in many areas as to form a variegated carpet of ground cover. These individual plants have evolved to thrive in this arid, parsimonious climate, and grown into self-sustaining plant communities. There are few trees, I assume because trees are less able to deal with the climatic stress of this ecology. 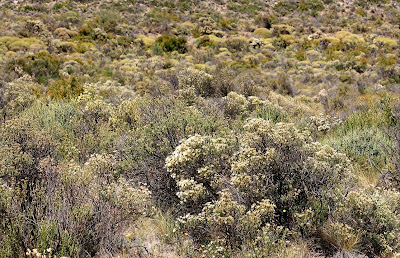 The next photo shows large numbers of silver and gray leaved plants, which are quite common in this area. 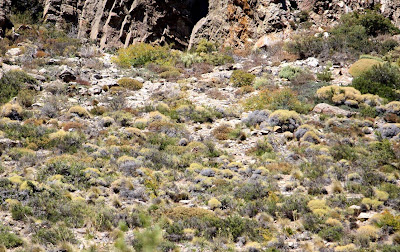 A low form of Baccharis, which to my surprise seems to live throughout the Americas, and remains easily recognizable, even in different forms, contrasts with the moisture-veiled mountains looking back toward Lake Nahuel Huapi. 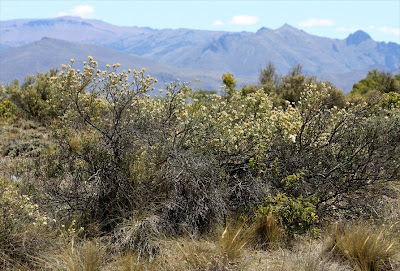 Learning about the Steppe
The grass below, Coiron, was my key to learning about the steppe because it lead to my accidental discovery that this "desert" was, in fact, steppe. We had stopped at a market selling the work of local artisans - a kind of collective endeavor that represents artisans all across the steppe. Though no one there spoke English and we spoke only the most rudimentary Spanish, we were able to communicate. I was particularly interested in knowing what the pretty tufted grass I had seen was and asked the question, pointing to it out the window. The young woman in charge of the market immediately responded with excitement. She showed us a small book for sale called Patagonia: Las Leyes de la Estepa (Patagonia: The Laws of the Steppe). It dawned on me that what I had been admiring was a steppe ecology, one I'd read about but never seen. Okay - I was a little over excited. Any plant freak will recall this feeling of discovery, accompanied by a tremulous weakness in the extremities. 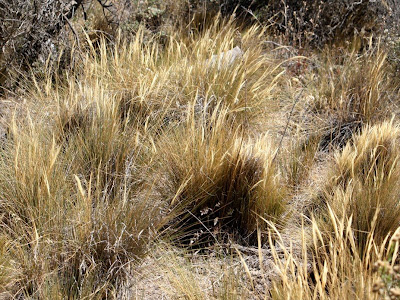 Labels, with Botanical Names, no Less
We lingered outside before getting into the car. The young manager noticed our continued interest and came out to show us several plants being established around the building. The tall tree planted nearest the car is an indigenous apple the local people have eaten for centuries (name unfortunately not caught). A number of other native shrubs and trees had been planted, and there was a small rock garden with plants labeled with both local and botanical names. 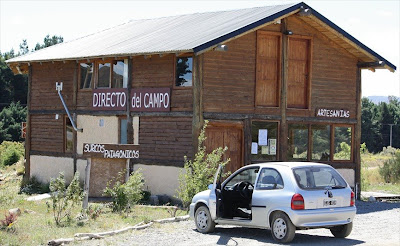 The label below confirmed my guess that this plant, which I'd seen out in the countryside, was indeed an acaena. There are, in fact, several different species of Acaena indigenous to the Patagonian steppe. 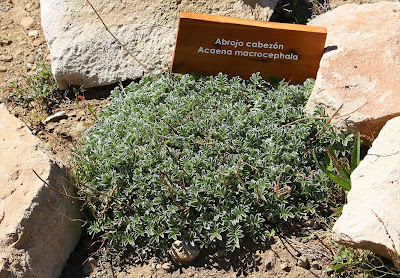 Here are two more photos of the Acaena macrocephala taken out in the countryside. In the second, note the highly reflective sheen of the foliage. 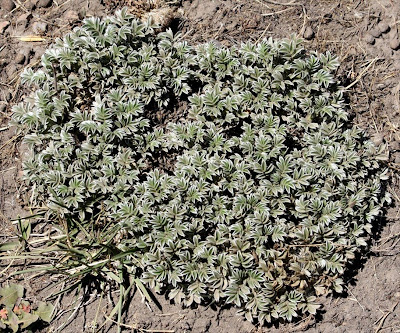 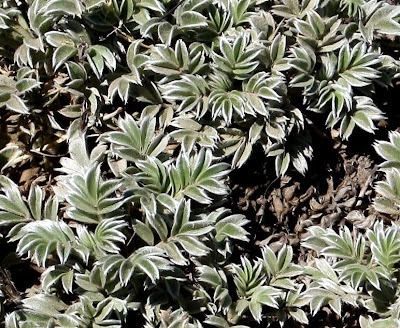 I haven't any idea what this is, but it adds a lot of color on a hot 90+ degree day just after high noon. 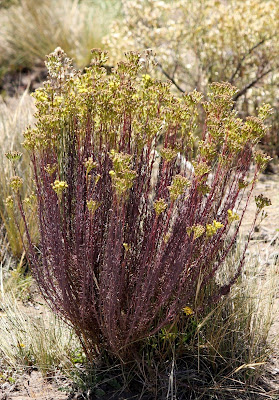 Not native according to our guide (and of European origin I've since learned), but famous throughout the steppe of both Argentina and Chile, is Rosa mosqueta (Rosa rubiginosa), which indigenous people have apparently used for many purposes. Oils from the hips are now sold widely for high quality skin care preparations. 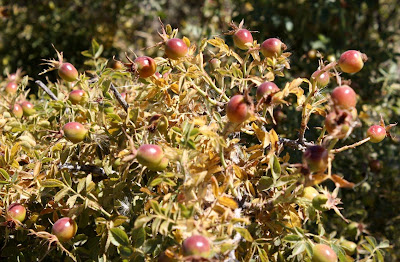 Another plant (below) the young manager of the shop thought of special interest is the Neneo (Mulinum spinosum). Neneo retains a notable green color even in the hottest weather, and it has spines that provide admirable protection from browsers (second photo). 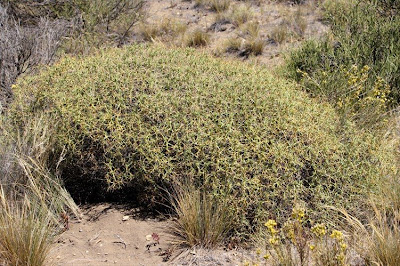 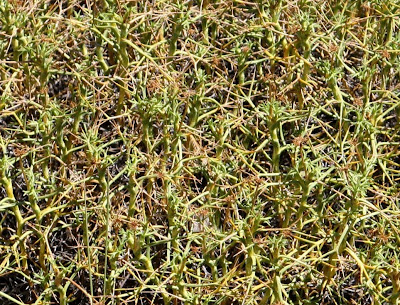 Here is yet another type of Acaena, name unknown, but identity clearly demonstrated by the dried seed heads. Like the other Acaenas it has a dense mounding form and silvery foliage. 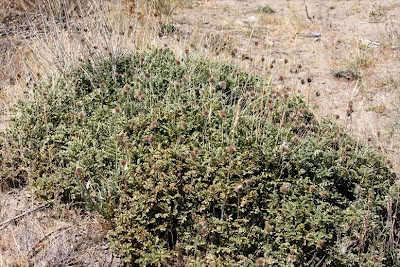 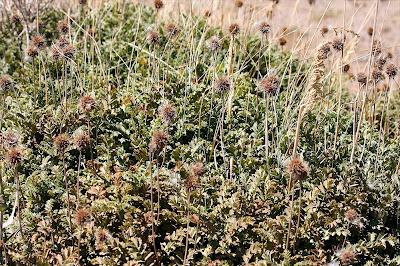 I wish I had more knowledge of the steppe and its "laws" but this one brief visit, and my copy of Los Leyes de la Estepa is all I'm left with at the moment. What a beautiful way to cover the ground!

I can't imitate such plantings in my own garden of heavy, wet clay, in the temperate Northeast US, but I do see practical lessons in use of variously shaped and colored ground covers, in the soft pastels of the steppe plants, and in focus on plant communities, rather than on individuals, as the backbone of the garden.

The pastel sunrise on Lake Nahuel Huapi suggests the soft pastels of the steppe plants. I don't suggest a real connection, but certainly an imaginary one, between the land and the sky. 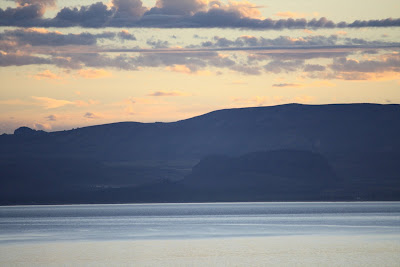 If you're familiar with steppe environments, I welcome comments. I'm still trying to read Las Leyes de la Estepa, and will make revisions and additions as I learn more.
Posted by James Golden at 4:06 PM