Shaping the woods, opening the sky 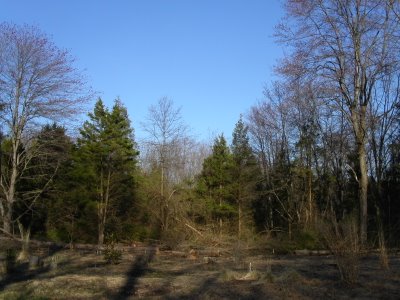 Here on this slope falling toward Lokatong Creek, the open field was left to grow wild 40 years ago. Small, randomly seeded cedars that look like pretty green sculptures in photos from the 1960s, grew into looming, scraggly, 60-foot trees coming right up to the house.

Cutting enough to create a ring of open space has been a costly and complicated chore. The ground is wet, very wet, through winter and well into summer, so felling the trees is the easy part. Moving them is almost impossible. No heavy equipment can get through the mud. Last year a crew manually moved and chipped 30 or 40 trees. I kept several truckloads of chips to create soft paths through the future wet prairie. This year I cut more cedars myself, then realized this 61 year old person doesn't have the energy, strength or time to do the rest of the job.

So I called in Tim and am waiting for his estimate. We discussed possibilities. Sustainable approaches appear to be the easiest to accomplish and the least costly. Fire is the easiest, and certainly appropriate for a prairie planting, but the danger of fire in the middle of the woods is too great. The plan is to cut up the trees into 30-inch logs, saving the largest ones for rustic seats, and to build a chevron-shaped wall of stacked logs on the back of the garden. This gives me a screened composting and utility area as well as hidden space to dispose of the tree limbs (good cover for wildlife too). The angle of the chevron relative to the house has to be just right, though. I hope it can follow the angle of the tree tops as they recede toward the vanishing point of the new perspective we're creating.

I'd seen stacked log walls in photos of other gardens and had already thought about using some such "natural" feature to help give structure to the wildness (think of Wallace Steven's poem - "I placed a jar in Tennessee and round it was upon the hill. It made the slovenly wilderness surround that hill").

Though the ground is a mess of fallen trees, the sky has opened like an eye above the emerging field and the back line of deciduous maples, oaks and chestnuts forms a noticeable circular border that appears to surround the house (an illusion). The woods are more open too, more like the older forest at the sides of the house, allowing the eye to move into the distance through the interstices between the trees.

I want to continue thinning out the cedars (I'll leave a few) over the coming years, making a more open, park-like area around the house, but there will be plenty of brush and undergrowth to encourage wildlife.
Posted by James Golden at 9:08 AM